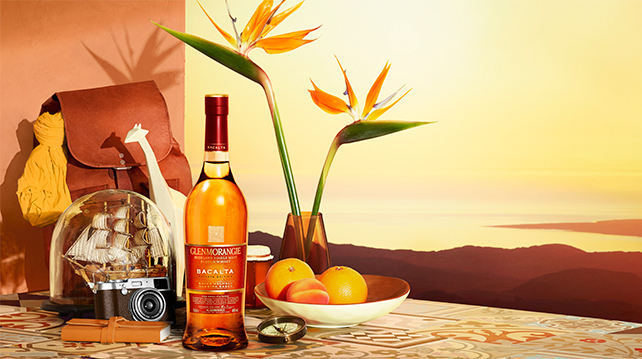 A Burst of Sunshine in the Glass

The eighth release of the award-winning range of Glenmorangie’s Private Edition, invites whisky connoisseurs to explore the Scottish Highland Distillery’s passion for innovation in the year 2017. This yearly release provides an opportunity for whisky connoisseurs and aficionados to experience a rare and intriguing single malt.

Glenmorangie Bacalta (Scotish Gaelic for “baked”) is the first Glenmorangie finished entirely in sun-baked Malmsey Madeira casks. It is inspired by Glenmorangie Madeira Finish, the world’s first whisky extra-matured in Madeira casks. It was released more than 20 years ago in 1987 as a limited edition and is still a sought-after whisky for aficionados. Glenmorangie is renowned for pioneering extra-maturation cask management. The whisky is first matured in ex-bourbon casks then transferred into ex-wine casks, where it spends additional time gaining further layers of flavour.

Using only the very best casks for maturation, Dr Bill Lumsden, The Director of Distilling, Whisky Creation and Whisky Stocks, had the Malmsey Madeira casks custom-designed for the finish. Glenmorangie Bacalta should remind you of the gentle warmth of long, balmy days and the finish reveals a complex character, which radiates sun-baked sweetness.

Determined to realise his vision of the perfect Madeira-finished Glenmorangie, Dr Lumsden used his years of expertise in working with casks and did the following:

1. Arranged for bespoke American oak casks to be created and heavily toasted.

2. Seasoned the casks to his exacting specifications by Malmsey wine – the sweetest and most prized of the Madeira wines – that were baked to maturity within, as the casks lay in the heat of Madeira’s sun.

3. Emptied the casks, shipped them to Scotland and filled them with a specially selected spirit that was already matured in ex-bourbon barrels. The Malmsey casks slowly releases the layers of sun-baked sweetness to Glenmorangie Bacalta.

Dr Lumsden says, “Glenmorangie Bacalta is a burst of sunshine in a glass.”

Glenmorangie is distributed by MHD Malaysia.