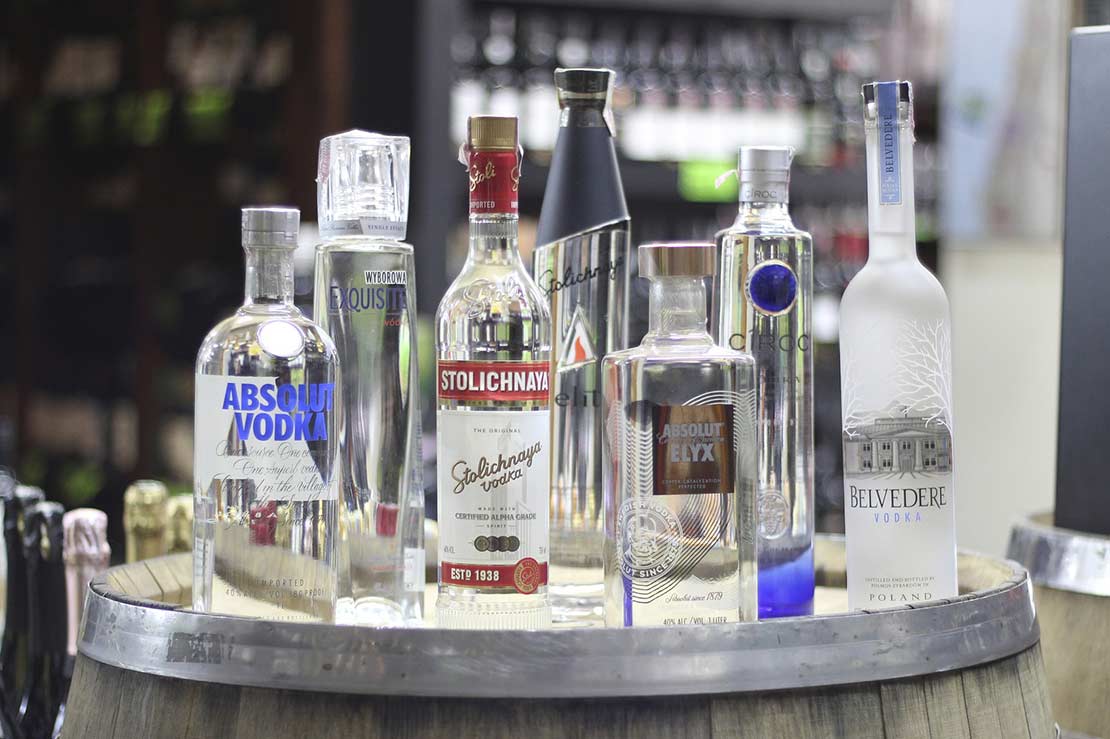 A brief (but comprehensive) introduction to Vodka

“You know what’s the best drink? An ice-cold vodka martini. Clean like water, but hits you like a plane”, the guest said as I served him his second martini.

I, for better or worse, could not disagree with his sentiments. The beauty of a vodka martini lies in its namesake; the clean, almost tasteless, and often colourless vodka. It has one job, and it knows how to do its job without being unpleasant.

However, as dull as it may seem, vodka hides a colourful story about itself. From its roots in the cold northern tundra to the speciality bars and shops today, vodka has come a long way, experiencing both highs and lows. Here, we will have a quick overview of what makes a vodka and how it became one of the most consumed spirits in the Western hemisphere.

The Little Water from The North

The name ‘vodka’ came from voda, the Slavic word for ‘little water’. In its early incarnation, the word ‘vodka’ referred to cosmetic cleanser and medicinal tinctures. 14th century herbal books would describe vodka’s uses as not only medicines, but as aftershave and perfume as well. 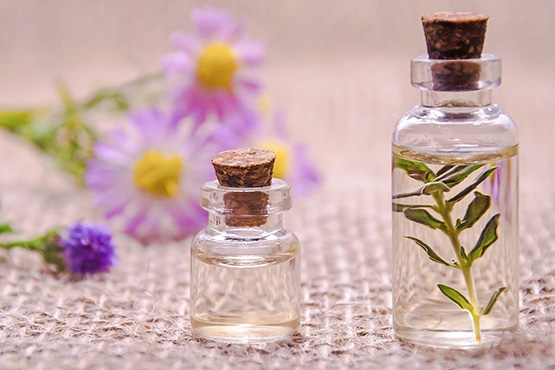 Even as it evolved into a casual drink, early vodka, especially those in Poland, were more akin to the herbal liqueur we know today. During this period, vodkas were made from grains like barley, wheat, and rye, though Russian aristocrats and Swedes have distilled their vodka from grape must or wine.

In the 18th century, the search for cleaner and purer vodkas led to the practice of triple (or in some cases, quadruple) distillations. The repeated distillation process improved the quality of vodka, making it a cleaner drink than its predecessor. It was around this time that charcoal filtration was introduced as part of vodka production process.

In Poland and Sweden, the 18th century also marked a switch to making vodka from potatoes instead of grains, as potatoes became the main crop. Besides the abundance of this new crop, some distillers reported that potato produces a cleaner tasting vodka, hence reducing the distillation cycle needed.

One of the most common questions I get asked is “Is vodka made from potato?”. 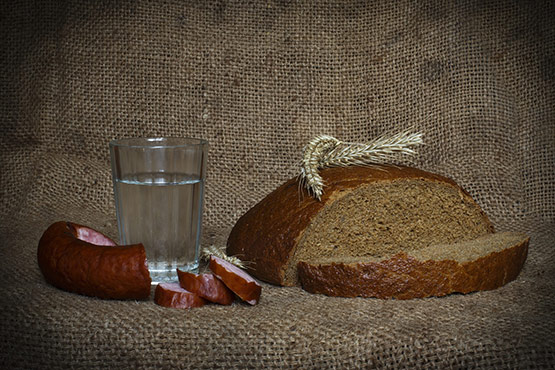 While potato vodka does exist, most of the vodka produced today is made from cereal grains like rye and wheat. Traditionally, rye and wheat are preferred due to their ability to withstand the harsh weather of traditional vodka countries like Russia and Poland. The idea of vodka being made from potatoes may have been a leftover idea from the glory days of Polish and Swedish potato vodkas.

Based on EU regulations, besides grains and potatoes, vodka can be made from “other agricultural raw materials”. This means vodka can be distilled from any sugar or starch that can be fermented as long as it is an agricultural product or by-product. This broad definition has spawned numerous unique vodkas in the past couple of decades. Today, vodka is made with anything from grape and soy to cassava roots (tapioca) and milk whey.

Turning Sugar and Starch to Vodka

Unlike other spirits, there are not many regulations pertaining to how vodka must be made. Instead, most regulations around the world define vodka by its looks and taste. As mentioned above, vodka can be made from virtually anything, though a large majority of vodka is made from cereal grains. The fermentation process for each ingredient is unique, so I will not go into the details here. Suffice to say, the goal is to ferment the ingredients into beer- or wine-like liquid before distilling it.

For vodka, distillation serves a vital role. Besides concentrating the alcohol content, distillation helps remove unwanted elements, such as congeners. In other spirits, congeners are desirable as they provide flavours in the finished product. However, these elements are considered ‘impurities’ when making vodka. Most commercial vodkas are distilled using column stills, favoured for their efficiency in removing impurities. As the defining characters of vodka are being colourless, odourless, and tasteless (as tasteless as a 40% alcohol drink can be), vodka is usually distilled multiple times, with anything from two to eighteen times. 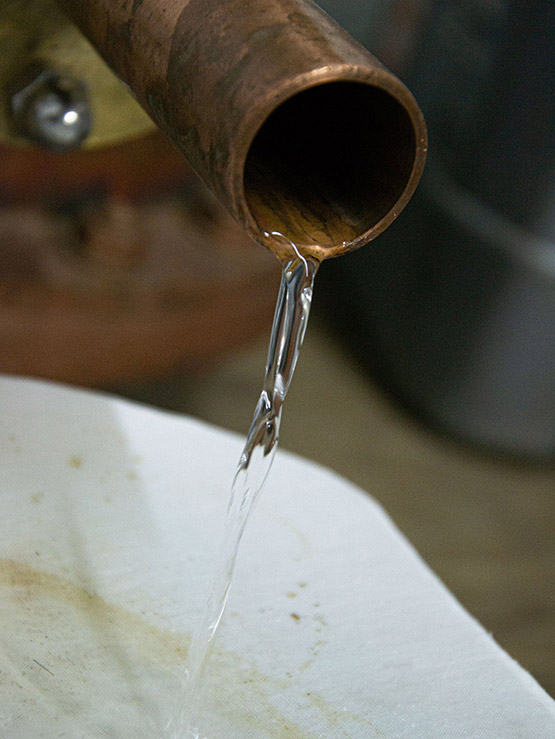 fter distillation, most vodkas go through a form of filtration process. This usually involves activated charcoal, a process similar to the Lincoln County process for Tennessee whiskies. Charcoal filtration helps remove heavier elements in the spirit, creating a light and smooth vodka.

However, much like the ingredients, there is no real limit on how vodka is filtered. Different brands have used different methods to filter their vodkas, such as coconut carbon, micron papers, and even quartz crystal. The materials used do result in vodkas of differing flavours and mouthfeel. Some brands even skip this process altogether, arguing that filtering is unnecessary as it will strip off the desired characters of their vodka.

After distillation, a spirit of over 90% alcohol content is obtained. This spirit is then watered down to the desired strength before being bottled. As with other spirits, the water used in the process is vital to maintain the quality of the final products. However, some vodka producers have turned this process into an art form. Do a quick search and you will find vodka being diluted with spring water from glaciers, mountains, and underground wells. Brands will tout the pureness of the water used or the unique mineral content it possesses, all to stand out from the pack.

Unlike the distinctive flavours of other spirits like whisky and tequila, vodka is best known for its neutral notes. However, to say vodka is truly tasteless is an oversimplification of its nature. Vodkas are subtle in how their flavours are expressed. A great vodka also draw emphasis to the texture or mouthfeel of the liquid. You will notice some vodkas drink as clean and smooth as water, while others coat your mouth, leaving a lingering sweetness. 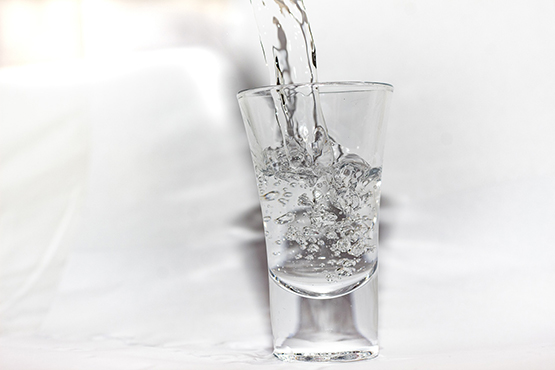 Vodka is climbing to premium status [Image by TheresaMuth from Pixabay]

We are now seeing a shift in how vodka is portrayed. It is no longer just the cheap shooter in the bar, instead steadily climbing to premium status in the last five decades. The status did not come from gold laced drinks or diamond encrusted bottles though. Vodka has shown itself to be a formidable spirit, both as a cocktail mixer and on its own. Great wheat vodkas will entice you with subtle sweetness, while superb potato vodkas lure you in with their creamy and earthy characters. The rise of niche vodkas like milk whey and grape vodkas also contribute to the gentle flavour spectrum of the drink.

So, the next time you are planning to have vodka, maybe consider taking a sip of it. You may find more than just a burning aftertaste and enjoy the elegant subtlety of the little water from the north. Na Zdrowie!