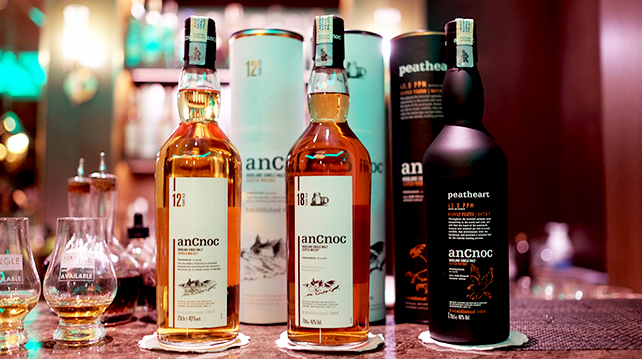 How did a whisky brand produce whiskies older than itself?

AnCnoc, located in Banffshire, Speyside, is a fairly young single malt whisky brand established since 1994. Its current core range includes the 12 years old, 18 years old, 24 years old and Peatheart (40ppm), the smokiest whisky the distillery has produced to date. What’s intriguing is that the 25-year-old brand has released its 35-year-old whisky for the second time. Impressively, they still have vintages that date from before the brand was created in 1994.

The ages won’t be so puzzling if you knew that AnCnoc’s whiskies are produced by Knockdhu Distillery. The AnCnoc name was adopted in 1994 because “Knockdhu” sounded too similar to “Knockando”, another Speyside single malt brand owned by Diageo.

With the new name, the distillery has since adopted a modern and stylish approach for the brand, yet never compromising on its illustrious heritage.

Knockdhu Distillery’s heritage dates back to 1894, producing whiskies for other distilleries for blending. The distillery did close down twice and has had ownership changes over the years, eventually being bought over by one of their clients, Inver House Distillers Limited in 1998. Inver House is now owned by International Beverage Holdings.

From all the whiskies they have produced, some remained in the warehouse since before the launch of the new AnCnoc brand. Master Blender Stuart Harvey joined in 2003 and has been tasked to work on the existing stock while blending them with their more recently produced whiskies to create new expressions for the brand.

Harvey is the only Master Blender in Scotland who is also a Master Brewer, a career he started in after his biochemistry degree. However, he found brewing too scientific and decided to join the whisky business for the art of blending. This also means Harvey knows how to work the entire whisky ecosystem from grain to mash, mash to the spirit and then ageing to blending.

Harvey’s ambition didn’t stop at the 1975 35-year-old vintage, which has done very well in the market where the production of age statement whiskies is at a decline. Some brands have started to take away their ages and replaced them with non-aged statement ones, applying trendy marketing approaches to target younger whisky drinkers with less demand for age statements.

“We are looking to bottle a 40-year-old next year and have kept some for 50 years old,” said Harvey when asked about the Japanese whisky trend. “It (Japanese whisky industry) actually has helped us (Scotch whisky) because when they became too expensive and are running out of stock, people go back to drinking Scotch. It’s about supply and demand. If you didn’t forecast 18 years ago for the market now, and when your whisky sales skyrocket, you can’t supply the demand.”

AnCnoc remains a small production whisky brand and is not available in most markets. Malaysia is one of the rare ones in Asia that actually receives this exclusive stock, thanks to the relationship between the brand and the local importer.

To buy AnCnoc, head to the Single & Available store in Bangsar Shopping Centre. Visit AnCnoc's website for their range of whiskies.