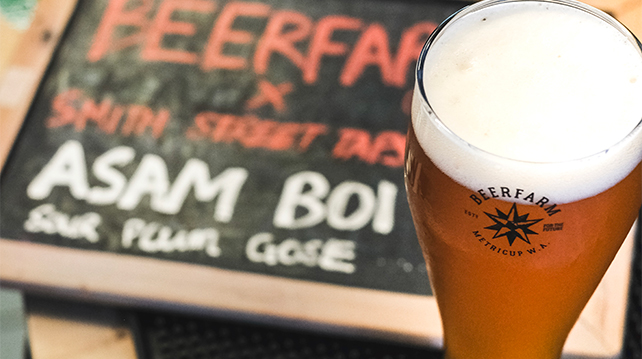 Back in March 2018, the team from Smith Street Taps Singapore (SST) took a trip down to Western Australia to brew a special batch of beer with Beerfarm, a craft brewery in Metricup, located in the Margaret River region. Beerfarm’s core range of beers and selected seasonals are currently available in Malaysia and Singapore.

The goal in this collaboration with the Singapore hawker brand was to brew a beer that matched the description and flavour profile set by SST. Taking some inspiration from Beerfarm’s popular Pineapple Sour, the collaboration recipe resulted in the Asam Boi Gose!

Gose is a traditional sour wheat ale style that originated from Goslar, Germany, typically with a refreshing fruity lemony-sourness, crisp salt character, and ABV of 4-5%. The asamboi, which is a sour plum dried and preserved with salt and sugar, was “dry-hopped” in the gose. In SE Asia, the asamboi is used in cooking, in drinks, or eaten as it is. The Asam Boi Gose is a surprisingly complex yet highly drinkable beer with sweet plum aroma, and a fruity and refreshing sour palate that is perfectly suited for our hot humid weather.

The SST boys assisted Beerfarm head brewer Josh Thomas with the initial stages of brewing up to the pre-fermentation stage and the brewery took over the process to the end. The beer was kegged and shipped to Singapore 8 weeks later. Available now, get your hands on a glass of Asam Boi Gose at Smith Street Taps and various craft beer bars around Singapore.