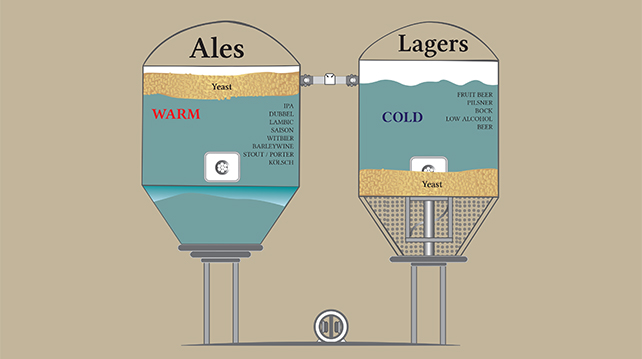 What you need to know about beer

Ah… beer. The Amber Nectar, The Golden Throat Charmer… as one brand, whose marketing was infinitely better than their beer, once described it.

We all drink it, but how many of us really appreciate it? As the third most consumed drink on the planet after water and tea, it’s everywhere; on billboards, TV, neon signs in windows, beer towels, beer mats… and many of us will have some form of beer advertising in our house. But do we take it for granted?

A BRIEF HISTORY
Beer is the catch-all term for yeast-fermented, malted-cereal beverages, often with added hops for flavour and bitterness. In simple terms the malted cereal (usually barley) is added to water along with yeast. The live yeast eats the sugars in the malt and this process produces both carbon dioxide and alcohol, which is why your beer is fizzy and makes you fall over.

Beer has been around in one form or another for up to nine thousand years. Early examples found in communities across the globe, suggest that the creation of fermented drinks naturally occurred alongside ancient forms of cultivation as various tribes and cultures thrived. Indeed both bread and beer are now seen as historical signs of a prosperous civilisation. Why bread and beer? Well, both required cultivation of crops - if you had beer and bread you also had successful farming within your community. And you had one other thing… naturally occurring yeast. It is therefore possible that individual cultures around the planet stumbled upon their first beer quite naturally and accidentally.

Even as beer became more readily available through the centuries, it wasn’t until relatively recently that specific beer making yeasts were cultivated allowing for consistent brews. Up until the 18th century most beer was still brewed in small communities, often by the local monastery, using wild yeast or cultures that had been passed down through the generations. And as sanitation standards were perhaps not quite what we see today this often led to inconsistent and sour tasting brews due to the brewing process not being 100% sterile.

STYLES
It’s easy at first glance to split beers into two distinct categories depending on how they are brewed: the bottom-fermented cold conditioned lagers; crisp, refreshing and preferably drank chilled. And the warm top-fermented ales, with abundant flavours that change as the beer slowly warms in the hand. But to think of beers as only available in two types misses the huge differentiation in styles.

By the end of the 19th century the importance of sterilisation in the brewing process along with specific knowledge regarding yeast types and cultivation meant beer manufacture moved steadily to an industrial scale, allowing for much greater experimentation in styles and types of beer.

Witbier and Dunkel (white and dark beers) flourished in Belgium and Germany while Pilsners and other pale lagers, a style which came to dominate the beer industry through the end of the 20th century, were popular throughout Eastern Europe.

In the UK the availability of beers often changed depending on the season. Porters and stouts were seen as winter beers, whilst pale, amber and brown ales were more refreshing for other times of the year. And with thousands of troops still stationed across the globe as part of the British Empire, UK brewers found ways to ship their produce overseas without it spoiling. More hops were added to Pale Ales to preserve them as they journeyed to the Subcontinent, thus creating India Pale Ales, the now ubiquitous IPA style. Meanwhile back in the 18th century, darker beers were made more alcoholic to last the journey to the far east of Europe creating Imperial (Russian) Stouts.

As the decades went by, global industrialisation led to fewer independent brewers and consolidation to larger multinational ones, lager became the dominant global beer. By the 1980s commercial lager and pilsners were king.

Here in Malaysia the story was similar. Though various ale types may have made it to Malaya and Borneo via various trade routes, the first officially imported beers were European lagers. That style was also the first to be brewed in the area in the form of Tiger Beer. So with the exception of a certain black and white draught stout, lager was pretty much it for Malaysian drinkers for decades. Right up until the last ten years in fact.

First Carlsberg and GAB (now Heineken) started to bring in brands their parent companies owned. Initially there were German beers, then Belgian. Shortly after, some English Ales arrived and more recently lesser known beers from UK, US and Australia. And in the past five or so years, a few intrepid Malaysians who knew a thing or two about beer started importing the best craft beers from around the world; beers from small breweries in all manner of traditional styles re-invented with big flavours and attitude. More malty, more hoppy and often more inventive than the commercial brewers.

Although still a fledgling industry in Malaysia, the choice of beers is now impressive. A sometimes bewildering line-up of all styles is available to take home from supermarkets, bottle shops and bars alike, whilst restaurants, bars and pubs are adding to their range all the time.

LAGERS
Alongside usual lagers like Carlsberg, Tiger and Heineken, other commercial brands of continental style lagers have hit the market like the French Kronenbourg 1664, which is now brewed locally, and the Belgian lager Stella Artois which is imported. Both can be found in supermarkets or on draught in certain bars. This style of crisp pale lager and pilsner is also available from a number of craft breweries too with much stronger flavours, which can be found at craft bars and bottle shops like Taps and The Great Beer Bar.

ALES
Away from lagers there are ales from established brewers like Fullers and Wells & Youngs from the UK. Likewise German and Belgian beers from the likes of Paulaner, Erdinger, Leffe and Hoegaarden can be found in bottle and increasingly on tap.

In the meantime, the Craft Beer revolution continues apace. Whilst the bars and bottle shops of Taps, Ales & Lagers and Great Beer Bar have championed these beers for the past few years, an increasing number of supermarkets and restaurants have started adding to their range with beers from, amongst others, Rogue, Brew Dog, Little Creatures and Stone breweries often popping up on shelves and menus.

All-in-all there has never been a better time to be a beer drinker in Malaysia and the choice is only set to increase.