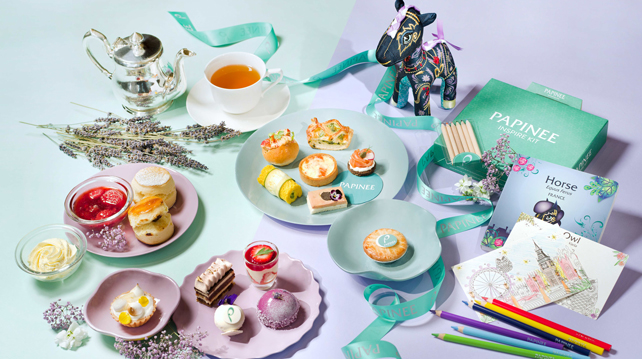 French company Papinee specialises in storytelling kits. Established by Dev Suj, the company was inspired by his mother who was often ill when he was a child and could not take him to many places. As a result, she brought the wonderful lands of far off places to him instead as she told him stories and painted lovely pictures in his head of places around the world.

Fast forward to today, Papinee now focuses its efforts on providing storytelling kits to children in need to inspire them to believe in their dreams and to achieve their goals. And now, together with Conrad Hong Kong, Papinee is bringing a bit of its magic to your tummies via too-pretty-to-eat afternoon tea sets.

The sets will incorporate the colours and characteristics of one of Papinee's characters, the horse Rus XIV Stallion King. Pastry chef Billy Yuen made sure the blackberry and lavender mousse gateau, the Opéra Papinee (a remake of the classic French cake) and the fantasy-like meringue lemon tart paid homage to Rus and what he stands for.

On top of the beautiful pastries, the tea set will also have seafood quiche, spinach and feta puff as well as sandwiches. Perrier-Jöuet champagne will come with the set at an additional cost of HK$208 (approx. RM104).

The Papinee afternoon tea is priced at HK$518 (approx. RM260) for two and HK$318 (approx. RM218) per person. The tea is inclusive of a Papinee Inspire Kit, a storybook and colouring postcard. It will be available at the hotel's Lobby Lounge from 9 May to 30 June 2018.