Overlooking the wet Friday evening traffic of downtown KL, guests gathered at Enfin by James Won for a Parisian inspired six-course dinner paired with Singleton Glen Ord whisky. The event, hosted by Moet Hennessy Diageo Malaysia, was for guests to explore the exquisiteness of the Singleton range: the 12 Year Old, 15 Year Old, 18 Year Old, and the surprise guest of the night, the Glen Ord 40 Year Old.

The dinner went on under the guidance of Chef James Won himself and Adam Brewer of Diageo Singapore, who explained the thought process behind the menu and the history of Singleton.

Before dinner began, guests popped on an Oculus headset for a Virtual Reality tour of the Singleton of Glen Ord distillery and tasting experience with a 12 Year Old in hand, highlighting the prominent notes on the nose and the palate – an exciting way to stir the imagination for the rest of the night.

Then, seated at the table in the main dining area, Chef Won introduced the theme of the night: pure. Throughout the menu ingredients were mostly raw, to enhance (and at times, contrast) the flavours of the expressions paired with the plates, giving a new way to experience the whisky. Brewer would step up between courses to explain the flavour profiles of each expression, as well as educate us on the history of Singleton of Glen Ord and whisky production (for example, the difference between whisky made before and after 1986 is due to the type of casks used in the aging process – pre-1986 shipping sherry casks made of European oak were used; then after 1986, when sherry had to be bottled in Jerez, Spain, American oak casks were used and then sent to Scotland for whisky production).

The dinner itself was a unique exploration of textures and flavours with a menu that predominantly used seafood – this was not your typical pairing dinner, and all the better for it. The amuse bouche was a delicate but flavoursome composition of oyster leaf and duck pancetta, sprinkled with toasted crumbs, served with the 12 Year Old for a strong start to the meal.

Three entrées followed, starting with a thin strip of lightly seared tuna embellished with white sturgeon caviar and a swirl of spiralized green apples, roselle and ulam raja, served with the 15 Year Old; next was a spin of a cereal dish (something Chef Won admits is a favourite of his) with mousse-like sea urchin served with dehydrated and fried quinoa, and fennel porridge scrumptiously paired with the 15 Year Old; and last of the entrées was a marron bisque from JB, plated on a bed of toasted walnut, fried seaweed, and garnished with sliced strawberries, all umami flavours that contrasted the dry sweetness from the 18 Year Old.

The main course was a choice between a 120 day old free-range chicken or Margaret River Wagyu, either also paired with the 18 Year Old. The young chicken was unexpectedly tender, and the Wagyu was served lightly seared, but delightfully medium rare on the inside. The sharpness of the 18 helped cut across the rich savoury flavours of the mains, and added a different dimension to the dish as a whole. An enjoyable contrast of flavours.

The evening finished with dessert, apple mille feuille with gelato, spiced macadamia and salty toffee, on a sable disc. Accompanied by the 18 Year Old, the two complemented each other beautifully. 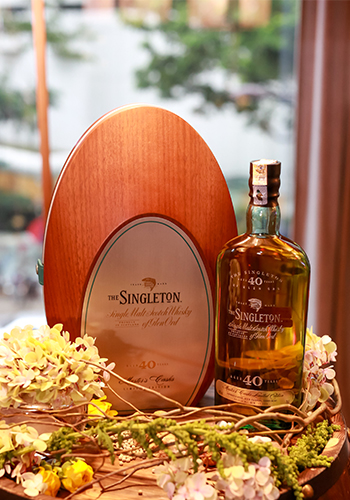 The Singleton Glen Ord 40YO with only 999 bottles available worldwide. Sweet fruity notes of orange and honey, followed by dark chocolate truffle with hints of white pepper smoke and liquorice.

The star of the night was without a doubt the 40 Year Old, generously shared among everyone. A rare masterpiece from the Master’s Casks, and the oldest single malt the distillery has bottled in over 170 years, the sweet notes of orange and honey with dark chocolate was a deliciously fitting end to the evening.