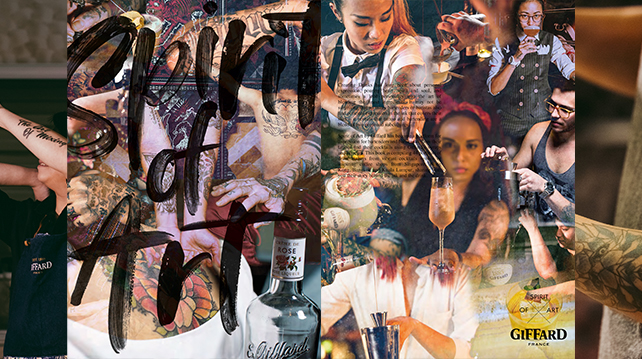 To name a brand that appreciates ink and its art, it would be Giffard, the French family-owned liqueur and spirits producer who has recently launched the Spirit of Art at the Cocktails Spirits Fair, held in early June at the Palais de Tokyo in Paris.

After the first edition launched in 2015 in the UK, this second edition features forty-four bartenders and baristas from Bangkok, Hong Kong, Kuala Lumpur and Singapore, their interviews, recipes and the tattoo culture in each city.

The book showcases photographs of the bartenders with their ink and drinks taken by photographers from each city with Patcharaporn Kompolis for Bangkok, Jana Yar for Hong Kong, Cliff Choong for Kuala Lumpur and Justin Choo for Singapore. In Hong Kong and Kuala Lumpur, Giffard also worked with two fashion brands, VANS HK and Pestle & Mortar Malaysia, highlighting collaborations between art and fashion.

Bartenders featured in each city:

We are giving away 3 copies of this limited edition book that gives an intimate look into the intertwined world of tattoo and mixology through the bartenders’ stories and their creations. Go take part, but first, are you a Thirst Club member yet?