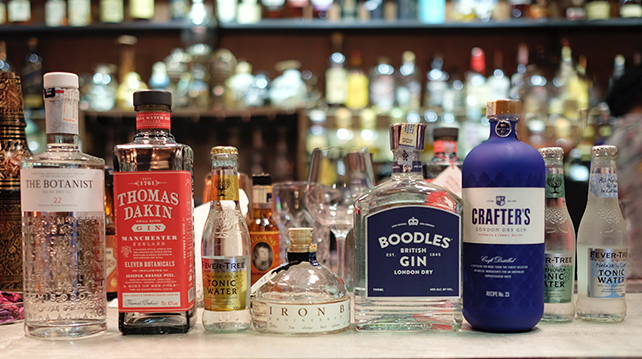 Unless you’ve been living under a rock for the last 15 years or so, you may well have noticed that gin is kind of a big deal right now.

A spirit that had become dreadfully unpopular from the mid to latter part of the 20th century is enjoying an incredible resurgence as a category. As the world of spirits and how we use them is becoming ever more sophisticated, there has never been a more varied market for niche and unusual gins from around the globe. Or has there?

Perhaps one of the first images we conjure in our minds when we think of gin is an 18th or 19th-century picture of London – possibly a grand old Gin Palace, or something akin to the notorious William Hogarth etching of ‘Gin Lane’ from 1751. Whilst this, or maybe a little earlier, could be a good starting point for something we may recognize as gin today, we’d need to go a little further back in time and a little further from London than we might first imagine if we wanted to find the roots of the famous juniper distillate. 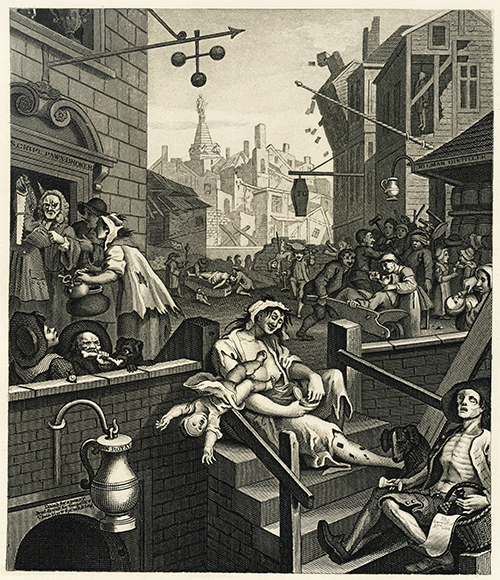 As far back as the Native American Navajo tribes and the Romans in Europe, medicinal properties have been attributed to the juniper berry - the botanical at the heart of gin, which grows freely in many parts of the globe. The Navajo purportedly used it as a cure for diabetes, whilst the Roman philosopher Pliny the Elder once noted that:

‘Gossip records a miracle! That to rub crushed juniper berries all over the male parts before coitus will prevent conception’

So there we go - a cure-all and contraceptive of the ancient world! But the distillation part?

Well, we know that at some point in the 700’s or 800’s AD, a Persian alchemist named Jabir Ibn Hayyan invented the Alembic Still, something of a precursor to pot stills that play an integral part in the history of gin. We also know that this technology makes its way back towards Europe via monks and missionaries around the 11th century where records indicate that monks on and around the Amalfi coast of Italy used distilled botanicals to cure a range of ailments. Juniper grew abundantly in this region, and based on the earlier comments of Pliny the Elder, could this possibly be the earliest stop on our journey to modern gin?

By 1269 we have the comments of a Flemish (modern-day Belgium/Holland region) monk named Jacob Van Maerlant writing that:

“He who wants to be rid of stomach pain use juniper cooked in rainwater.

He who has cramps cook juniper in wine. It’s good against the pain.”

But taking medicinal elements out of the equation, who first started drinking Juniper based liquids for fun? In 1351, another Flemish monk named Jan van Aalter writes of how to add botanicals to distillates and describes the ‘Euphoric Benefits’ of drinking them. By 1495 a book from an affluent Dutch family notes the recipe for a botanical distillate which includes Juniper (alongside nutmeg, ginger, galangal, grains of paradise, cloves, cinnamon, cardamom, many of which we should note are not native to Europe, never mind England!). This book, intriguingly later falls into the hands of a doctor named Sir Hans Sloane who later donates it alongside others in his collection to the British people as part of the founding collection of the British Library.

However, we still don’t see the word ‘Gin’ appearing anywhere in our tale. Indeed it will be a while more before a proto-gin of sorts, ‘Genever’, enters the drinking lexicon during the mid-1500’s, when a dramatic cold snap in weather conditions forced the hands of grape distillers to switch to distilling grain with their botanicals.

During the Eighty Years’ War in Europe between 1568-1648 in which English soldiers fought alongside the Dutch against the Spanish, the English noted the effect of drinking this genever on their Dutch counterparts prior to battle. This was when the phrase ‘Dutch Courage’ entered the world for the first time, referencing the emboldening impact of alcohol on the human condition!

Following this conflict, a taste for genever (alongside several thousand Dutch soldiers) made its way to British shores, but it’s not until 1688 when a monarch called William of Orange takes the British throne do we start to see things moving in that part of the world. He deregulates the distillation industry in the UK and the popularity of juniper distillates from southern and central Europe finally begins to permeate the British Isles.

The word ‘genever’ starts to be bastardised to ‘Gin’ in the UK, and the production techniques in creating it begin to differ. In 1702, around half a million gallons where consumed, but by the death of William of Orange in 1727 that number has skyrocketed to around 5 million gallons a year. We begin our journey into something known as the ‘Gin Craze’ or ‘Gin Madness’, a kind of on/off drugs epidemic afflicting England which lasts for around 200 years!

It is worth noting that whilst initially, genever had been the reserve of the wealthy, gin was most definitely the drink of the impoverished at the time, and the Gin Palaces of London in the 19th century grew as a kind of garish pastiche of opulence for the downtrodden. Equally, within this height of imperialism, the botanicals used in gin production came from more and more far-flung and exotic places, giving the working class drinker an experience of escapism almost, from the arduous nature of life during the industrial revolution.

So what do we have up until this point? Certainly traditional British brands such as Gordons (distilling since 1769), Tanqueray (1830) and Beefeater (1863) dominate the market as we move towards the early 20th Century and the zenith of gin’s popularity in Europe and the US. Perhaps this is where the myth of gin being traditionally a ‘quintessentially British’ tipple stems from. But as our story indicates, its roots are in Persian technology, Mediterranean medicine, Dutch recreational drinking, and with flavours from Asia, Africa and beyond! Indeed right here in Malaysia, Malacca played an intriguing role in bringing many of the flavours of gin to Europe by trade routes, possibly the reason that the Tanqueray Malacca Gin is named after it.

From the 1950’s onwards the rise and rise of gin hits a stumbling block. With the popular march of vodka being led by the Smirnoff brand, gin falls out of fashion and into obscurity. Perhaps the only brands that survived during this period are the aforementioned English powerhouses (and maybe this is another reason it became thought of as a drink the Brits gave to the world). Then, Bombay Sapphire hits the market in 1987, marking the beginning of the second coming for gin.

So how did Bombay Sapphire unleash this second wave of the ‘Gin Craze’ upon the world, and what has its impact been?

Bombay Sapphire, with their fabulously marketable blue bottle, and floral blend of botanicals helped the gin industry win back drinkers (likely from the vodka market) to the juniper cause by……. not being overly juniper-ous!

One of the main regulatory factors in producing gin is the requirement that it is ‘predominantly flavoured of juniper’, effectively meaning that gin should taste more of juniper than of anything else. Although Bombay Sapphire certainly still belongs in the traditional ‘London Dry’ section of the gin market (traditional and regulation-heavy gins), it was the first gin amongst the major international players to temper the juniper within its blend, and to use other botanicals to change the profile of how the juniper comes through in the gin. By moving away from the traditional juniper-forward tasting notes that had negative connotations for many younger drinkers, and with their stylish blue bottle, Bombay Sapphire became the flag bearer for more diversity in modern gins.

Following the success of Bombay Sapphire, other major players entered this area of the market with Tanqueray 10 and Hendricks having significant global success for Diageo and William Grant & Sons respectively. By moving away from the juniper-forward approach that typified gin through its dark ages of the 70’s and 80’s, the success of these products clearly influenced a new wave of gin distillers and rectifiers into producing more creative and imaginative botanical blends than had previously been the case (Tanqueray 10 is the only gin to have been inducted into the San Francisco Spirit Competition Hall of Fame whilst The Wall Street Journal has declared Hendricks the world’s finest gin).

Many of these new producers fall into the ‘craft’ and ‘artisanal’ areas of the market, producing small batches of wonderfully diverse gins, using unique botanicals not previously seen in gin distillation. Whilst we have already discussed how many of the herbs and spices come from around the globe even in traditional gins, with more modern gins it is interesting to see products with localised flavour profiles making waves internationally. Ki No Bi in Japan uses largely botanicals only found growing around their Kyoto distillery, with the notable inclusion of bamboo leaf. Calamity Gin from Texas gets incredibly fresh floral notes from that most ubiquitous of Texan flowers the Blue Bonnet, and at the Glendalough Distillery in Ireland, fresh foraged botanicals such as wood sorrel and sea woodruff lend a fresh meadow taste to their wonderful gin.

Crucially, these craft producers really engage with a new generation of connoisseur-ist consumers, for whom the quality of their drink and an opportunity to learn about it are integral.

The current boom in the cocktail market has also helped greatly. For me, gin has such wonderful synergy with the cocktail movement because the level of diversity in the gin market gives bartenders so many different flavour profiles to play with. This, in turn, leads to many ways to twist drinks with their own palate and style by playing with the gin and the garnish. Certainly, it is no coincidence that the re-emergence of both the cocktail and gin movements have risen in parallel in recent years, with each helping the other to introduce a new generation to their craft.

So from this sprouts the dominant and resurgent gin market of today, and all of the incredible and wonderful gin brands that we find from around the globe. I’m often asked about my favorite gin brands and whilst I would definitely name Portobello Road Gin amongst them (okay, there was always going to be at least one British gin in there!) others would definitely include West Winds (Australia), Glendalough (Ireland), Citadelle (France), Gin Mare (Spain), Deaths Door (USA) and Napue (Finland) - none of which immediately spring to mind as ‘traditional’ gin producing places.

As an intriguing end to our journey in gin, there is one market that has been a cornerstone of the industry for years, also proving the truly global nature of the popularity of gin. Who are the world’s biggest gin consumers? Britain? The US? Nope - the Philippines! Somewhere in the region of 22 million cases of gin are consumed each year in the Philippines (a staggering 41% of GLOBAL consumption!!), most of which are the local brand, Ginebra San Miguel. San Miguel have been producing gin in the Philippines since the 1830’s, and with the brand able to spend roughly 80% of the wholesale price per bottle on advertising, coupled with the fact that a litre of gin will cost you the same as a litre of beer in Manila, we have an idea of why this popularity has been sustained!

So when considering our journey today, what do I think about the modern global influence on the gin market? I would certainly answer that as indicated from the tale above, not only is it going from strength to strength, but rather it was ever thus.

Adam Westbrook currently runs a series of Masterclasses in Western Australia called The Gin Sessions, spreading his knowledge about gin.