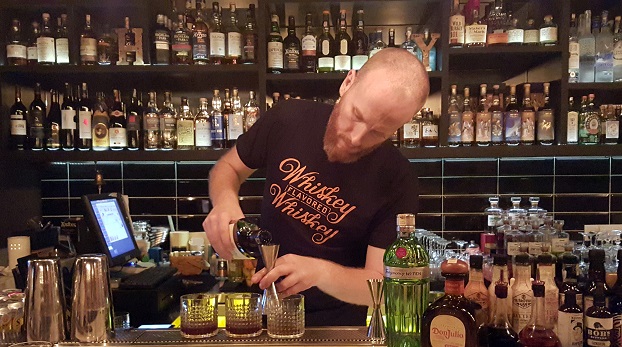 How to be a world class bartender

It’s been 10 years since Tim Etherington-Judge left his home in England to travel halfway across the world to New Zealand to pursue the challenge of bartending. In the years since, he’s worked across the globe, gained international prestige (winning “quite a few” awards according to him, including 2009 NZ Bartender of the Year and representing New Zealand at the Cocktail World Cup in 2007) and made a name for himself as one of the best bartenders in the world.

Currently he’s a Diageo Reserve Global Brand Ambassador – safe to say, he’s an expert. We met with him before his guest shift at Hyde at 53M in February for some cocktails and words of wisdom. And for the young bloods coming up in the industry, he has a few key points to share.

“Master the arts of flavour and crafting great drinks,” says Tim, about what it takes to become a world class bartender.

Having been involved with Diageo World Class since 2011, Tim knows what it takes to make an impact in a competition. “But not just that…a big part of it is personality. We look for a bartender who can bring their personality across and entertain and create great experiences. Give them something above and beyond.”

Speaking of competitions, Tim can’t approve of them enough.

“It allows you to do things you’d never do in the bar. Spending three months to work on a single drink and coming up with a really elaborate story and experience around that performance is something really unique.” There’s a real difference from only working behind a bar, where service speed is key “..because your customers aren’t going to wait half an hour for you to prepare a garnish while you tell them a long story”, he says.

“I always tell bartenders when I travel that they should embrace their local ingredients. Many bartenders try to copy what’s going on in New York, London, Sydney, or Singapore, and you end up with a pale copy of someone else’s work,” stresses Tim. Using ingredients that are unique to your area means that the cocktails will therefore be unique to your bar. And who knows, you might even be the bartender responsible for the next Big Thing.

All this advice would be for nothing if you’ve got a bad attitude. Tim’s final words of advice? Don’t be an ass. “Bar tenders who are arrogant and don’t have that sense of humility and willingness to do whatever they can for the guest can be quite condescending at times,” he says, elaborating, “if someone comes in and orders something that the bartender thinks is below them (like a mojito for example) you see some young bartenders go ‘what are you ordering a mojito for, you idiot?’, when really they should think ‘let me make the best mojito you’ve ever had in your life’.”

Because, at the end of the day, the guest is the most important person in the bar. “That’s how they should be looking at it: building trust with the customers. It doesn’t matter what drink they’re having, as long as you’re giving them the best experience they can possibly have – that’s what it’s all about.”

Watch Tim make one of his creations for the event Single-Tonic to see what goes into the drink.