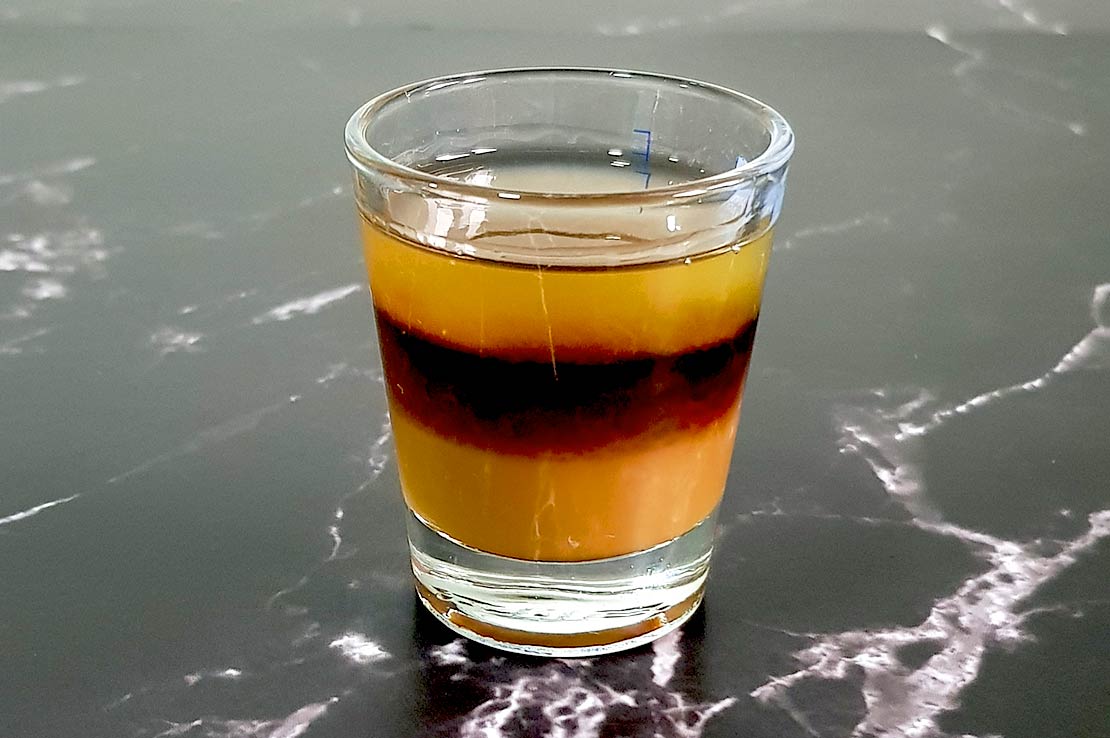 Bring this party shot back, maybe just at home

We’ve all been there, taking party shots, whether someone has ordered it for your birthday, or you’re the one ordering to get the party started.

But we are in lockdown now, what is there to celebrate?

There isn’t anything really. Perhaps for getting your vaccine allocation? Perhaps just staying alive another day? Or just something to practise during lockdown. We don’t mean the drinking part because we believe in moderation. But “layering” can take a few tries to get right, it requires two things – patience and steady hands (so getting drunk won’t help).

B-52 is a layered drink, or in bartending terms, a “built” drink and doesn’t require ice or shaking or stirring. All you need is a shot glass or a small wine glass, like a sherry glass; or a whisky nosing glass, like a Glencairn, and a teaspoon. Then, the necessary alcohol.

Like many drink recipes that don’t get documented until they attain world domination, the B-52 is the same. However, the most believable claim of the origin of the B-52 is as an invention of Peter Fich, the Canadian head bartender of Banff Springs Hotel in Banff, Alberta in the 1970s. Seems like a lot of classics were invented during that era.

The drink is said to be named after Fich’s favourite band The B-52s who were formed in 1976, and the band got its name from "a particular beehive hairdo resembling the nose cone of the (B-52) aircraft".

There is another saying that the drink was invented earlier in 1972 at Alice’s Restaurant in Malibu, California. However, it is disputed by Dale DeGroff’s The Essential Cocktail as it was not backed by fact or anyone in the restaurant.

The classic B-52 is 20ml each of Kahlúa, Bailey’s and Grand Marnier, as sequenced in the layering. Due to the different densities of the liquids based on the sugar and alcohol content, when carefully poured, a clear separation is formed.

There are many variations of B-52s and they are called different names under the B-50 series.

To make a flaming B-52, top the fourth layer with 5ml overproof rum like the Plantation O.F.T.D. and light it on fire to make a B-52 On a Mission. Replace the top layer of triple sec with hazelnut liqueur to make a B-51, Amaretto for a B-54 and absinthe for a B-55.

For more recipes, visit the B-52 Wikipedia page.