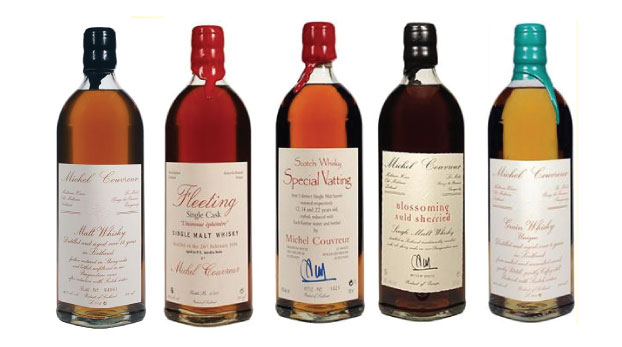 Michel Couvreur is one of the last artisanal whisky producers in the world. He is of Belgian origin whose trade was in making and trading wine after landing in Burgundy in the 1950’s. He sold most of his products to England and Scotland, and particularly fond of the fishing and hunting at the highlands.

He moved to England in 1956, then Scotland in 1964 where he started to become involved in whisky production. Michel was drawn to the production of whisky using Bere Barley grown in Orkney, Scotland and maturing it in rare sherry casks such as Pedro Ximenez1 (also known as PX) and Palomino2. When the access to sherry casks were exhausted due to the change in methods (replacement of sherry cask by steel or plastic) , Michel moved back to Burgundy and there, he started his business in importing young Scotch whisky to his cellars where they go through the Solera process3 in rare sherry casks.

Michel believes that "90% of the quality of a whisky comes from the barrel, and only 10% are from the distillation process”. In 1985, he started to grow his own Bere Barley in Orkney, produced his first distillation at Edredour  the next year.

Determined to make his own brand of whisky, he incorporated Michel Couvreur (Scotch Whiskies) Ltd in 1990 at Meldrum House in Scotland. He then began the Scotch whisky improvement at Bouze-lès-Beaune in compliance with the now almost ignored pure Scottish tradition4.

1. A type of white grape grown in certain regions of Spain used to produce sherry.
2. Also a type of white grapes widely grown in Spain used to produce sherry.
3. An ageing process used for not only spirits, but also wine, beer and vinegar. It is a process by blending a mixture of ages in the finished product. The average age will gradually increase and be used for even a hundred cycles. Therefore, even if a new batch of product now can still have the remnants of the very first product.
4. Import and use empty sherry casks from Andalusia, Spain right after they are emptied of wines.