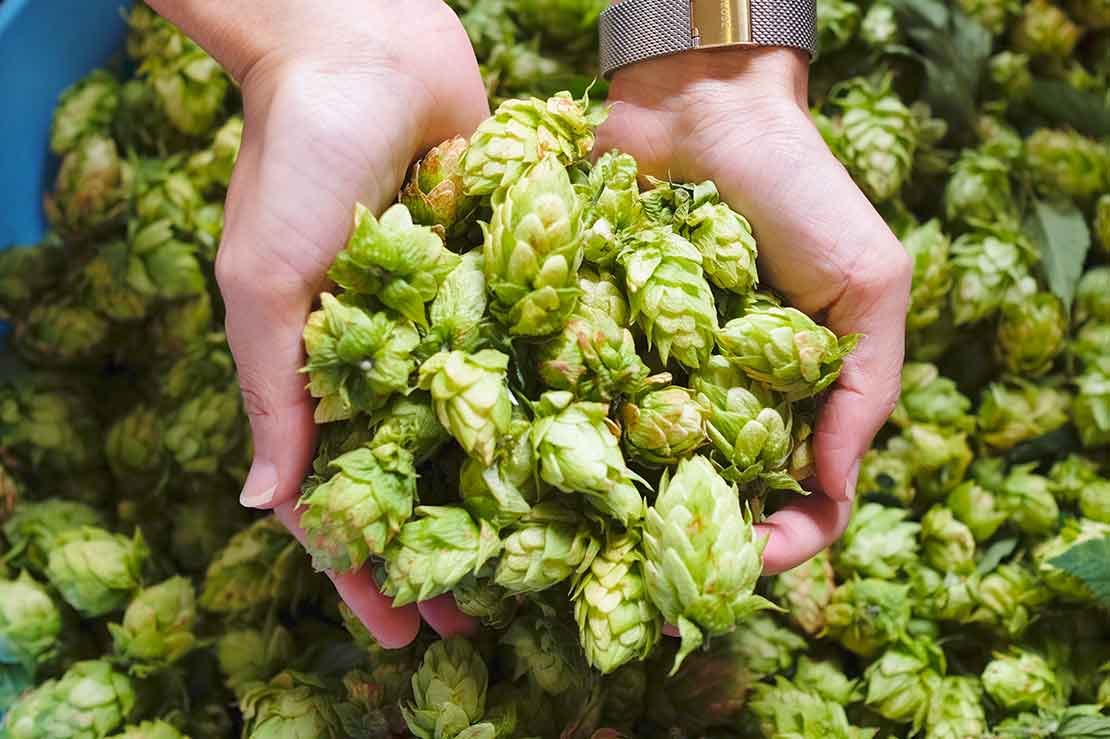 In the late 1800’s the world of beer hops really started to get interesting. Around that time, brewers and growers began investigating the active ingredients in hops much more closely leading to the creation of Wye College (closed in 2009), one of the first hop breeding programs ever established.

Lupulin is a resinous powder extracted from the female flowers of the hop plant and used as a sedative. – thefreedictionary.com

HybridsResearchers at Wye College discovered distinct differences between hops grown in different parts of the world. American hops tended to be bold with intense flavours and aromas stemming from increased levels of lupulin. This was in stark contrast to traditional English hops, which were far more subtle, delicate and floral in nature.

Armed with this knowledge, researchers at Wye began cross-breeding varieties. They created hybrids more resistant to disease, with increased bitterness and cherry-picked flavour characteristics and in the process creating vast new prospects for brewers.

As beer markets expanded, breeding programs too began in the United States. There, universities like Oregon State and more recently, Washington and Michigan State began investing in the study and creation of brand new varieties for the US beer market.

Shifting away from the embrace of unique varieties and their natural variations of essential oils, the creation of high alpha varieties has been a focus for growers over the past 100 years. This is in large part driven by the popularity of mass-produced beer styles largely devoid of hop flavours and aromas. Things are changing though.

Craft beer is now turning the notion that alpha is king on its head. In the search for more unique flavours and aromas, essential oils are reigning supreme and drinkers can’t get enough.

Demand for aroma and flavour

Renowned beer expert Stan Hieronymus thinks, on the back of craft beer, hoppiness has undoubtedly made a huge comeback.

“Right now there are a significant number of drinkers voting for aroma and flavour. Hops are a big part of satisfying that demand.

“Each niche offers an opportunity for further exploration. We've got breweries looking for ways to get more fruit and juice (flavours) from hops and those intent on producing beers with a more intense experience.”

Growers are achieving this with breeding programs focussed on creating hops with greater levels and unique combinations of essential oils, but it’s a process that often takes more than a decade to bring about commercially viable varieties brewers can use.

Despite the inherent difficulty, the emergence of craft beer has heralded an expansion of hop breeding far beyond the borders of Europe and America. Countries like New Zealand, Australia, South Africa and Japan are also creating unique and massively in-demand hops aimed at meeting the industry’s insatiable thirst for variety.

Retailers have had to shift their strategy too with stores stocking many more brands than they once did to make the same number of sales. While spoiled for choice, beer consumers can often be left confused about what to buy amid a sea of different styles and brands.

For drinkers that aren’t necessarily hop-savvy, it's important to just drink what you like, says Stan.

“You can manage that without knowing anything about the raw material involved. But if you know you like beers enhanced by Nelson Sauvin then understanding that Hallertau Blanc contains the same sulfur compound might make you think ‘yep’ when you come across a beer made with Blanc.

“Familiar is good; understanding why it is familiar is better.”

Many craft breweries are now divulging the hop varieties used on their beer labels in an effort to better introduce drinkers to the unique flavours and aromas that modern hops like Galaxy, Citra and Mosaic impart.

Stan believes that while more information for the drinker is generally better, with supply uncertainty being a major global issue for brewers, he warns breweries about the dangers of marketing that may back them into a corner.

“For a brewer, the potential downside (of identifying a hop) is not being able to get a variety that has then become part of a brand. Plus there will be year-to-year variation with any variety.”

Flavour and aroma aside, evolutions in craft beer and hop farming haven’t only been limited to increasing alpha and oil content. Farmers and brewers today are also becoming much more focused on environmental factors.

“Investment in the future is promising. It's not just about aroma and flavour, but also about sustainability.”

Julian Healey is a freelance marketing consultant to the beer industry and author of The Hops List, a comprehensive guide to 265 varieties of beer hops.