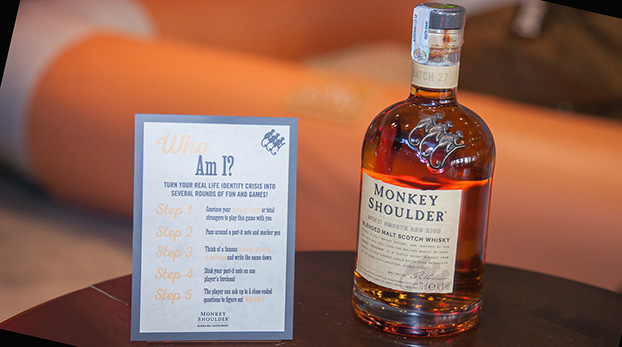 Monkey Shoulder has been in the international market since 2005, but it didn’t make its official Malaysian debut until just a month ago.

This blended malt whisky is a combination of three Speyside single malts – Balvenie, Glenfiddich and Kininvie – which are all produced by the family-owned distillers William Grant & Sons. The blend is matured in first fill bourbon barrels, then blended together in a marrying tun for about three to six months. It’s then distilled, matured and bottled in Dufftown.

The name ‘Monkey Shoulder’ pays homage to the hardworking maltmen who used to get afflicted by sore shoulders from the many hours of shovelling malt by hand, causing them to hang their arms down like a monkey.

The brand’s character is full-on cheeky and mischievous, just like a monkey! Traditional whisky events tend to feature a formal presentation by a Brand Ambassador, followed by a whisky sampling-and-sharing session, which may be paired with food (if you’re lucky!). However, Monkey Shoulder’s launch event at Slate @ The Row had the atmosphere of a funfair, complete with a ring toss tent, retro arcade games, a food truck and a giant inflatable popcorn pool. It’s quite a breath of fresh air, knowing that the brand doesn’t take itself too seriously.

But marketing fanfare aside, the most important question is: how’s it taste? Fruity sweet, easy drinking – just like any classic Speyside should be, with a spicy finish. For a blend that’s not aged, it’s surprisingly smooth too, making it highly palatable neat, yet robust enough for a bit of ice or water. It’s even been suggested by the brand ambassadors that it’s perfect for cocktails too.

Monkey Shoulder is bottled at 40% ABV and priced on average at RM280 per bottle. It is now at major hypermarkets and selected bars such as Omakase+Appreciate, Souled Out, W.I.P, HYDE at 53M, Healy Mac’s Irish Bar & Restaurant and Splash.