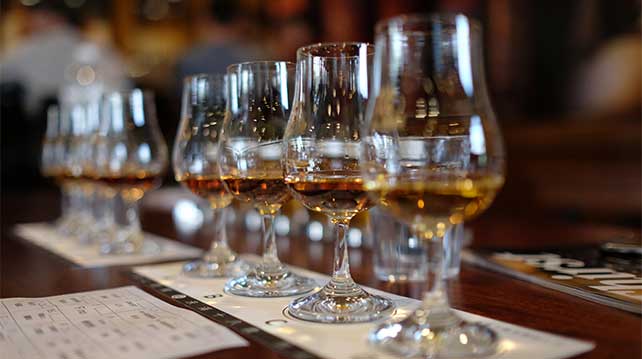 Peaty Whisky - A Tradition in Scotch Worth Sampling

In the Scottish Inner Hebrides, in the shire of Argyll, is the Isle of Islay. Known as the "Queen of the Hebrides," Islay is the site of eight major distilleries famous for their smoky, peaty whiskies.

Peat is a precursor to coal - a pulpy, wet mass of quasi-rotted vegetation that grows at a rate of about a millimeter a year in mires where climatic conditions are exact. Peat bogs cover 1.5 million square miles of the earth, primarily in Russia, Northern Europe and Canada, and run as deep as 60 feet. Most peat is between 4,000-6,000 years old. When harvested and dried, peat can be burned for heat, cooking and power generation. Moreover, peat is traditionally burned by distilleries in whisky production and lends its unique flavor to the final product.

Whisky making begins with a process called malting. Barley is soaked for two to three days in warm water and then spread on the floor of a malting house, or placed in a drum to rotate at a constant temperature. As the barley begins to sprout, germination is halted by drying the barley in a kiln for up to 30 hours. This is where peat enters the process.

Peat, burned to fire the kiln, produces acrid smoke. The smoke contains compounds called phenols, which are absorbed by the barley while in the kiln. The phenol level absorbed by the barley can be controlled by the length of exposure to the smoke, the amount of peat burned, the composition of peat, and the geographic source of the peat. Each distillery has its own special combination of peat factors to control the final flavor if its product.

Peat phenols are measured in parts per million (ppm), and readings are generally taken twice. The first is taken from the malt after the kiln drying process is complete. The second is from the final product. Generally, 33% of the phenol value is lost during distillation, although a whisky's advertised phenol content is traditionally that found in the malt. Though many traditional whiskys incorporate some amount of peat in manufacture, peaty whisky has a significantly higher phenol content than other whiskys, and a significantly smokier flavor.

Peaty water does not make peaty whisky: a misconception.

After kiln drying is complete, the malt is ground into grist and taken to a large vessel called a mash tun, where water is added to extract the natural sugars. This slurry of grist and water is called mash. There is often some amount of peat in the dark water drawn from the hills of Islay used to make Scotch whisky mash. While peaty water tastes of minerals, absent is the smoky flavor that is found in the barley from malting. Peat smoke, not peat itself, gives whisky the qualities of peaty whisky.

Often, the question of what peaty whisky tastes like quickly reveals the drinker's opinion. People who love very peaty whisky claim that it is nutty, herbal and creamy with notes of citrus and salt from the sea surrounding Islay. People who dislike peaty whisky are quick to use other comparisons: medicine, iodine, coal and potting dirt. Both lovers and haters of peaty whisky tend to agree on one characteristic: it is smoky and unique.

Eight peaty whiskies from the eight distilleries of Islay.

If you wish to try peaty whisky, consider diving in with one of the eight major labels from the Isle of Islay.

Ardbeg has produced whisky commercially since 1815, and offers some of the peatiest traditional scotch whisky in the world, with a phenol content of 55 ppm.

Laphroaig, the only scotch whisky to carry the Royal Warrant of the Prince of Wales, is owned by Beam Suntory. Their manufacturing process has remained largely unchanged since 1815.

Lagavulin distills their product slowly in pear-shaped pot stills, and has a history dating back to 1742.

Caol Ila is a light peaty whisky with floral notes. More pale in color than its competitors, it is sold as both a single malt and as an ingredient in blends like Johnnie Walker.

Bowmore offers scotch whisky and has been in operation since 1779. They still malt much of their barley traditionally, on the floors of their malting house.

Kilchoman began operation in 2004 - the first new major distillery on Islay in 124 years. Kilchoman has a goal of carrying all parts of the scotch-making process - from growing barley to bottling - on the Isle of Islay.

Bruichladdich, built in 1881, produces the grand dame of peated whiskies - the Octomore 5.1, with a phenol content of 169 ppm. Additionally, they carry regularly-peated and unpeated varieties.

Bunnahabhain stands in contrast to Islay's heavily-peated whiskys. With phenol ppm contents of only 1-2, the company's approach is to let Islay's other notes shine through. It's a perfect Scotch for people who dislike peat.

Every whisky drinker should try peaty whisky at least once. Those that loathe it are not out of luck - there are still hundreds of unpeated whiskys, some of which still qualify as Scotch. Those who love peaty whisky, however, are enjoying something unique: thousands of years of natural history and centuries of Scotch-making tradition.