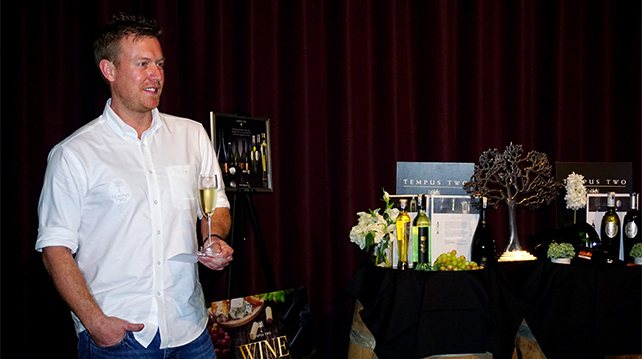 The New World with Andrew Duff

Without oversimplifying the complex categories too greatly, wine can be fundamentally divided into two main groups: Old World, being the traditional wine-producing regions of Europe; and New World, being the more recent producers like the United States, South America, and Australia. They all come with their own unique characteristics that bottle the terroir and climate where the grapes were grown.

Some might assume that Old World wines would be superior because of the history and tradition behind them, but they would be mistaken as New World wines manage to hold their own against the Old. Winemaker Andrew Duff of Australian winery Tempus Two knows well about Australian wines, and is equally passionate about them. For him the differences are no longer quite so stark as Aussie wines make leaps in quality – he cheekily mentions Brettanomyces, “the argument starter” as he calls it, saying the spoilage yeast “is something the New World doesn’t have to constantly defend themselves on…but that’s all I am willing to put into writing!”

According to Duff, he feels that New World wines benefit from a much greater flexibility, saying “I think the major merit of New World wine compared to Old World is the freedom of constraints toward tradition and regulation of these traditions.” It’s allowed vineyards to take risks and get a bit more creative, “This ensures greater stylistic diversity within regions, greater utilisation of alternative varieties and blends, experimental wines (be they natural or made using more modern applications) and much more consistent, greater quality wines during the more trying vintages.” In a sense, these are new wines for the modern world.

So what separates the two worlds? Duff admits it’s difficult to determine the differences without practice (“although I was once told when I started my studies that Old World wine was all about the palate, whereas New World was all about the aromatics”), but also because the quality of Australian wines have grown in leaps and bounds over the years. “In decades past you could always generalise comments such as ‘Australian wines are higher in alcohol, their aromatics are more apparent and they’re lower in acidity’,” he says.

“However winemaking stylistic approaches in Australia are changing, we are refining how we do things…For example, winemakers aren’t necessarily chasing those big alcohol-driven styles of the Barossa Valley anymore, they’re focusing on more refined alcohols coupled with concentration.” And thanks to the different climates across Australia’s vast land mass most grape varieties are able to thrive, so the country’s wine portfolio is now expansive and quite sophisticated – Duff waxes poetic about the “Sauvignon Blanc at 550m altitude in the cool climate of the Adelaide Hills, to internationally acclaimed Semillons planted in old river beds of the Hunter Valley in a more maritime influenced climate below 100m elevation, and everything in between like Shiraz (bold from the Barossa, elegant from the Hunter), Cabernet Sauvignon from Coonawarra (South Australia), Riesling from either Valleys of the Clare or Eden (South Australia), and Chardonnay.”

With all that said however, vintages from the same year can be quite different from region to region. For example, wines from 2008, 2011, and 2012 from the Barossa and Hunter Valley – the oldest wine-growing regions – produced drastically different results, as he explains “2008 and 2012 are known throughout Asia to be very good Australian vintages, whereas 2011 is a more difficult one. This is certainly the case for the Barossa Valley, however it is the opposite for the Hunter Valley – it was a trying year in 2008 and 2012 for Hunter Valley Reds.” So it’s worthwhile doing your research, as not all vintages are created equal.

As the Winemaker at Tempus Two, Andrew Duff shared a few thoughts about the winery and his recommendations from their portfolio:

You’ve said you feel the Tempus Two Chardonnay range deserves greater recognition - why is that?
In my eyes Chardonnay is the greatest of the primary varieties (although my love affair is with Semillon); it’s the most diverse grape in either the New or Old World…You can oak it (or not), utilise sur lie by battonage/stirring or rolling, or don’t extend lees contact at all. It’s dubbed the winemaker’s wine and is one of the most popular varieties of the world. However, people are sometimes confused by all the different hats it can wear and this can often deter a consumer new to the variety from experiencing all Chardonnay has to offer.

Australia had it particularly worse off. It was everywhere and the vast majority of consumers once accustomed to the style got quite sick of it – big, oaky, buttery, alcoholic wines that were almost orange gold in colour! Australian winemakers have spent a long time reinventing their approach to Chardonnay (and with great reward too, I might add). Tempus Two already had great Semillons when I took over as the winemaker, very competitive Shiraz and Cabernet and extremely popular bubbles. I felt that Chardonnay just needed some attention and I was very willing to give it some.

Which wine from Tempus Two would you say is the best suited for food pairing, and why?
Semillon, definitely Semillon! Lower in alcohol (which means you can drink more), with an array of citrus minerality, lime, and length with acidity to spare, it is the most perfect accompaniment to any seafood dish! The only issue is it’s quite rare! You can find younger vintages, but bear in mind this is a white wine that is designed to drink with some age on it, even 10-20 years! Failing that, I would look for our Cabernets (both blends and straight varieties) and spoil yourself with a good bit of Australian lamb.