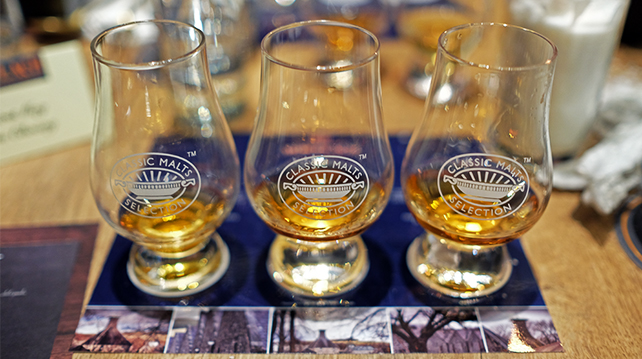 The Beast of Dufftown

Sitting at the candle-lit long table, we were told that a whole hog was used to make the dinner tonight. 50 guests were to taste the Mortlach 12YO, 16YO and 20YO with dinner pairing at the Curious Kitchen, the grill specialists who love their Spanish Iberico pork dishes.

To understand the excitement of the guests that night, it is important to know a little about Mortlach to set the mood right. That brings us to Dufftown, Scotland, where Mortlach Distillery is located.

Dufftown is the largest whisky producing town in Scotland and has named itself the “World Capital of Whisky” for exactly this reason. The town is located next to the River Fiddich and houses many world renowned distilleries, and one such distillery is Mortlach.

Mortlach was the first legal distillery in Dufftown, established by James Findlater in 1823. The distillery changed hands many times but two significant periods of ownership have had the biggest impact on the brand’s whisky development. One of them was Alexander Mitchell Cowie, who expanded the distillery in 1897; the other is John Walker & Sons, who acquired Mortlach in 1923.

Mortlach is referred to as “The Beast of Dufftown” for the “meatiness” of its new spirit. This is a result of a complex distilling process called “2.81 Distilled”, which is seen on every bottle. How did they get to this odd number, not 2 like everyone else (why can’t they just be the normal child), not 3 like the Irish, but 2.81?

In short, Mortlach has six stills. The first two comprise of a wash still and a spirit still that create the first spirit stream. The second and third wash stills create the second and third spirit streams. Combining all three spirits streams, they then take 80% of the total combined spirits and run this through the second spirit still. The remaining 20% goes into the third spirit still and distilled 3 times. All this adds up to a spirit that is distilled 2.81 times. This process was put in place by Cowie together with distillery architect Charles J Doig in 1897, and has never changed since.

The Mortlach spirit is the main component in the Johnnie Walker Black Label blended malt, where characteristics of the Mortlach 12YO are quite pronounced in the blend. The acquisition of the distillery in 1923 means that Diageo is now the owner of the brand.

The 12YO (The Wee Witchie) pays homage to the still that is used for the last 20% of the spirits distillation. It’s aged in ex-sherry and ex-bourbon casks, tastes of dark cherry with a strong character that evolves over time as it sits in the glass.

The 16YO (Distillery’s Dram, note that this is different from the Flora and Fauna) is aged in 100% ex-sherry cask and a constant comparison to the Flora and Fauna 16YO, that was discontinued when the brand decided to launch the non-age statement range. It’s rich like fruit cake with lots of spice and a long lingering dry finish. Let it breathe or add a drop of water or two to open it up.

The 20YO is a strange age (this distillery doesn’t like to do things normal), is aged in ex-sherry and whisky refill casks. Deep and heavy, oaky and savoury, best to go with a cigar or sip on its own. Another one that needs time to open up, but the reward is worth the wait.

All three whiskies are bottled at 43.4% ABV. 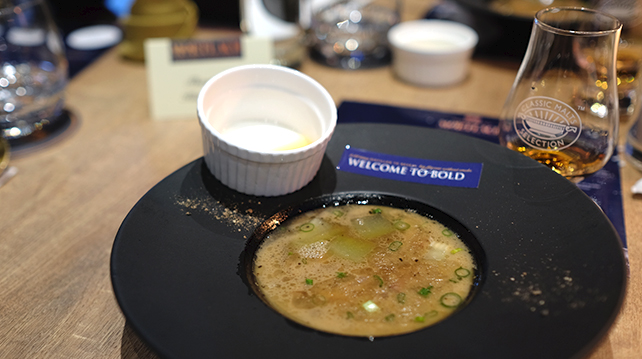 Over the four-course dinner, Mortlach was also incorporated into the cooking. The 12YO was to be poured into the Ying & Yang Soup cooked with white pork bone, ginseng, wintermelon, jujube dong guai, Solomon’s seal and Chinese yam. This Chinese recipe is said to mend your chi for a balanced flow that encourages good blood circulation. 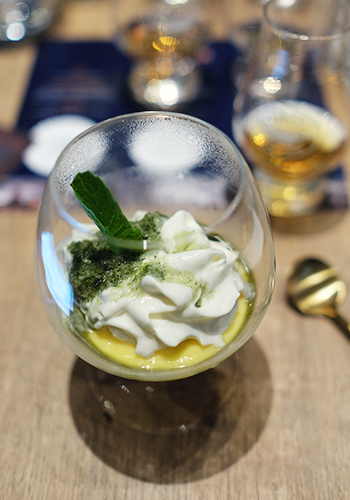 The most commendable dish was the Iberico Chow Fan with crunchy rice, carrots, long beans and Iberico bits, where some vegetables were finally seen in this “beasty” dinner. It complemented well with the 12YO. There was also a small amount of XR21 infused in the coconut whipped cream served in the passion fruit custard and mint granita dessert.

Other than the 3 core expressions, Mortlach also produces a 14YO that’s available in travel retail. If you ever come across the Flora and Fauna 16YO, it’s said to be a beastier version of the current 16YO. I can’t imagine any more intense flavours than these expressions that were served to us that night. I am content to have them all for different moods and time of the day. Nonetheless, the Flora and Fauna is always welcome at my desk should you have some to share.