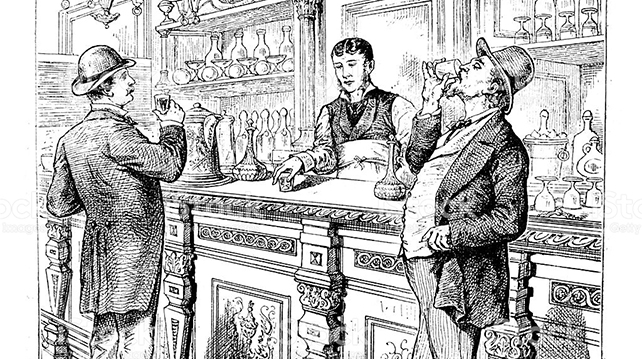 What you need to know about classic cocktails

It’s July 21, 1796. You sit in the Big Brass Rail, the most famous pre-Prohibition bar in America. Located on New York's Fifth Avenue, this is the very spot where the Empire State Building will be built in the future. The great Scottish poet Robert Burns passed away on this day. In his honour, you hold in your hand a new drink: the Bobby Burns, with malt scotch, sweet vermouth, and Benedictine. You take a deep sip of history in the making.

Such is the appeal of the American cocktail. The drinks themselves tell a part of the nation’s history and carry with them a spirit of camaraderie.

The origin of the term “cocktail”, is relatively unknown beyond traditional lore. One popular story involves a woman named Betsy Flanagan, who put a rooster tail into her drinks and coined the nickname “cock-tail”, as is described by Cheryl Charming in The Everything Bartender’s Book. According to David Wondrich of Imbibe, the word "cocktail" originated from horse trade where ginger was placed up an old horse's butt to cock its tail up.

The first description of the drink appeared in the 1806 New York publication of The Balance and Columbian Repository: The “cocktail is stimulating liquor composed of spirits of any kind, sugar, water, and bitters,” quotes Charming.

With the rise of ice machines and beer taps, the bar scene swelled in popularity during the Industrial Revolution (1760 – 1840), especially as European immigrants brought their customs of communal drinking. The cocktail grew in popularity, and this was when the Manhattan, the Old Fashioned, and the Rob Roy were first created. “This was the classic era, a time of invention and excitement, a time when the cocktail was king,” writes Dale DeGroff, the highly praised bartender of New York’s Rainbow Room, in his book The Essential Cocktail.

Soon after, the Prohibition began. Some historians believe that America felt threatened by the cultural customs arriving with the new immigrants, especially in regard to alcohol consumption. The 13-year ban on alcohol from 1920 to 1933 was likely an emotional response to regulate social behaviour for the sake of the nation’s physical and spiritual health. While on the surface the intention was to protect the nation’s common good, this 18th Amendment essentially infringed on the individuals’ rights that the Constitution protected.

After Prohibition, cocktail popularity struggled against the Great Depression and World War II. However, the cocktail culture revived after the war, especially when companies realised they could profit by advertising through creative drink creations such as the Bloody Mary and the Irish Coffee.

Culture has since evolved, and so has the cocktail. In the 1950s and ’60s, whiskey and gin-based drinks shifted to vodka-based drinks. Cranberry and exotic drinks, like the Margarita, flourished in the ’60s. The 1970s experienced a lull in cocktail popularity, as drinking culture shifted to a taste for wine. However, according to DeGroff, the late ’80s marked the start of a “culinary revolution” in which America desired finer ingredients, flavours and options, and bartenders throughout the nation rediscovered the art of the cocktail.

Indeed, the cocktail is an evolving drink. While it’s had its ups and downs, it remains an artistic symbol for America’s prevailing spirit.

[Read: The all-time most popular cocktails in bars (History of modern cocktails)]