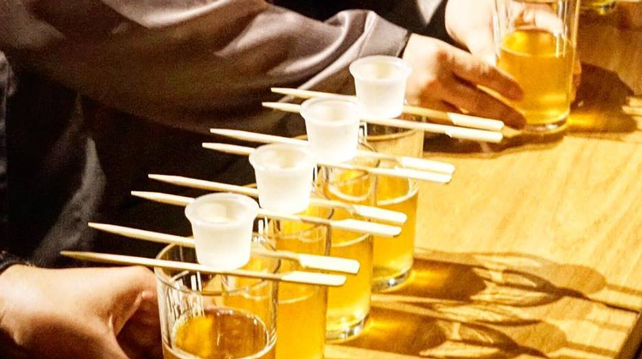 Now in it’s seventh year, the Sake Festival Singapore is back on 22nd June for its largest edition to date with over 460 different sake and liquors for tasting at the day-long event.

To make this year run smoother than before, organisers have introduced digital payment through event wristbands, to save on queuing time – just upload credits to your wristband and pay throughout the event hall for your food and sake. Top ups can be done on the go at top up stations. Of course, sake tastings are still complimentary, and if you’re one of the first 1,000 people through the doors you’ll receive a special edition sake cup to use on the day (and then take home after you’ve had your fun).

With all that said, here are three things to check out on the day:

Festival newcomer KOSÉ will be joining 52 other participating brands, companies, and organisations to exhibit their new skincare line made with kojic acid – from the same mould that’s used in the brewing process to make sake. They’ll teach you about the koji fungus and its benefits in the modern skincare regimen.

While Dassai have discontinued the immensely popular Dassai 50 label, they’ll be showcasing the Dassai 45 at SFS2019. Watch out for new sakes Phoenix Junmaidaiginjo and Phoenix Sparkling from the collaboration between Tatenokawa and French indie-pop band Phoenix.

Four of Singapore’s best-known Japanese restaurants – Yatagarasu, Nirai-Kanai, Kajiken, Kamoshita – will be bringing their best food to chow down on, like Okinawa soba, oden, mazesoba, karaage, and edamame. Also check out Yatagarasu’s Wanko Soba Challenge, where you eat as many bowls of Wanko Soba within the time limit, just for S$1!

Tickets are already on sale and can be purchased online for S$40, or on the day for S$50. For more details, check out their Facebook page.