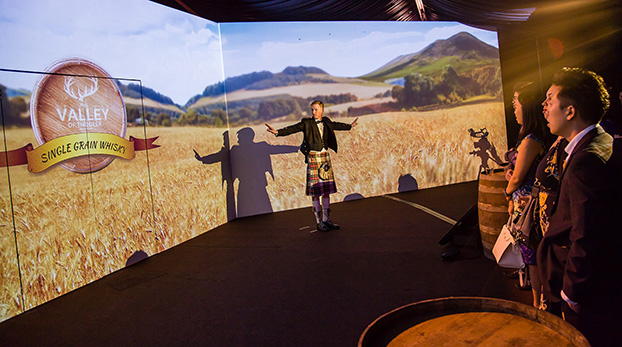 Through the valley with Glenfiddich

A rainy May afternoon set the scene for a misty, chilly evening; creating the perfect backdrop for bringing Glenfiddich’s Dufftown distillery to life at Carcosa Seri Negara, Kuala Lumpur.
From the 27th to the 30th of May, the second Valley of the Deer instalment ran in Asia (the first being the year before in Bangkok, Thailand, to great success) where about 3000 guests experienced an insightful behind-the-scenes look at the inner workings of the most reputable single malt distillery in the world.

Malaysia was selected as the host country for the second instalment as it is considered to be an important market with many whisky enthusiasts who would appreciate a rare experience like this – some attendees were especially invited, while others gained tickets by a Glenfiddich bottle purchase at participating outlets leading up to the event.

Through a combination of interactive technology and reconstruction, the grounds of this heritage building became a tour site into the heart of Glenfiddich, starting with the Timeline Tunnel – a retrospective on the whisky’s 127 year history and major milestones (including a mention on the special edition Snow Phoenix, born from the heavy snowfall of January 2010 and accidental warehouse roof collapse).

From here, guests entered The World of Whisky. Designed entirely by Fergusson-Stewart, this motion-sensor digital display room detailed everything there is to know about the whisky - how it is made, the ingredients used, types of whisky and the regions, with a specific focus on Scotland and the heart of Dufftown where the Glenfiddich distillery was.

Next was the Process Room, a recreation of the distillery with a scaled down version of the entire whisky creation process – malting, mashing, fermentation, distillation and maturation – that included replicas of stills, and digital technology to enhance the experience. The final stop of the production tour concluded in the Live Coopering room, manned by the long serving Head Cooper Ian McDonald – the Master of Oak and Iron, as he is affectionately known. He assembled a barrel before our eyes, gathering the thin planks of charred oak together with iron hoops, whilst explaining how this process imbues the whisky with flavour as it matures over the years.

The most buzzed about stop on the tour was the Interactive Tasting room, where the star of the night was an interactive display table top. This would light up with a menu when you laid down your drink or info cards from your Glenfiddich guest’s passport, detailing everything there is to know or to learn about your choice of dram, the history of the brand, and the different products under Glenfiddich. It’s safe to say there were many impressed guests that night.

Back in the drawing room was an alcove that acted as the Glenfiddich Archive, showcasing some of their oldest whiskies. On display was one of their vintage bottlings (estimated to be from 1903-1908), as well as the first 50 year old whisky in the world.

The tour seemed to end much too soon, as the small groups of guests were whisked through the entire course quite quickly without allowing us to fully absorb everything we had seen. However, it is worth noting that every night hundreds of guests were guided through the tour, so it made sense that each group was sent through swiftly in order to ensure a smooth night for everyone.

Drams were distributed at the end of the night with samples of the 21, 30, 40 and 50 year old Glenfiddich expressions for guests to enjoy, now with a greater appreciation and understanding of the magic from the Valley of the Deer.