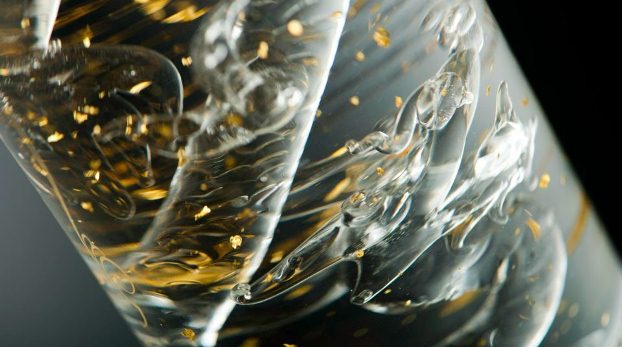 The second night of my visit to Hong Kong, I was shown a bottle of vodka containing a glass dragon sculpted as “8” and 23 carat edible gold flakes. Through a friend who was the insider of the market in the city, I was given a date to meet the brand owner in their office.

Finding Royal Dragon Vodka (RDV) office was like being in one of the Hong Kong’s classic movie sets - Infernal Affairs. Growing up with Hong Kong movies and dramas has given me the romantic imagination of the city. Now being in it is a little overwhelming but at the same time, intriguing. I was guided to a gated entrance on the side of a bar called Pulp, told to go up the neon lit stair case with no signs about the existence of any company in this building, then led to the back with many numbered doors on one side of the hallway. I found the number I was told of, knocked on the door and was greeted by Ralph Pelzer, the contact given to me by my friend. 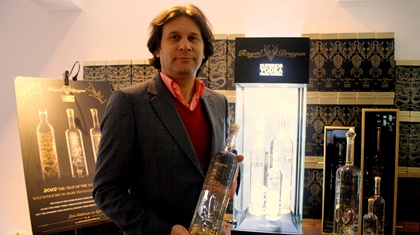 The Creator
Behind the door was a totally different setting, the office offered a great view to one of the most happening clubbing streets in Central Hong Kong. I was finally introduced to the man behind the brand – Michel Morren. Morren handed a gold plated name card which I was sure costed more than my box of 200 coated paper printed in Malaysia. A quick Google search would find the Russian businessman the founder of Goldvish, the company that set a Guinness Book Record on the most expensive cell phone in the world. The phone was sold in the Millionaire's Fair at Cannes, France in 2006 for 1 million euro (4 million ringgit Malaysia). With such a record on the creation of extra premium luxury brand, I was curious about how much Morren focuses in the quality of the vodka when the packaging is so extravagant. 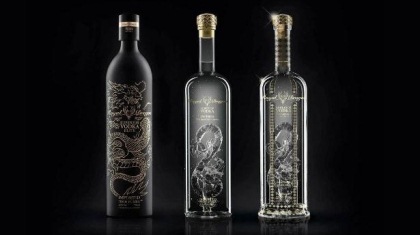 The Bottles
The office displayed the whole range of Royal Dragon Vodka: Elite, Imperial and The Emperor. Bottles come in different sizes from 750ml to 6 litres, different packaging from black matted to diamond encrusted and the snowy effect of 23 carat edible gold flakes certified in Switzerland.
Limited Edition
The most premium bottle that holds 35 diamonds contains a hand blown caged dragon with a jewellery dragon pendant of 18 carat gold. The limited edition gold and diamond bottle is an obvious design that will appeal to the Chinese market, who values 8 as a prosperous number, dragon as a powerful symbol and gold and diamonds as wealth and prestige.
The Brand
Morren started working on this brand 2 years ago when he met a friend who was in the spirit business. Being a Russian has quickly made him associate with the national spirit and that was when the idea of RDV became his next project after selling Goldvish.
The Drink
RDV is produced in Russia with winter harvest rye planted by farmers nearby the distillery. The spirit is distilled 5 times in copper pots and made in small batches. When asked where the spirit is ranked among other vodka brand, Morren said, “RDV has the taste profile similar to the level as Belvedere and Grey Goose but our marketing directions are very different. For an extra premium luxury brand like RDV, you are not only selling the packaging of the product but the quality of the content is also very important.”

Vodka is a great base for cocktails, will there be campaigns to promote the brand through mixologing? “We have our own bartender created some cocktail recipes and we always welcome input from the bartenders on any creative ways to showcase the unique feature of the spirit, such as a cocktail made to highlight the gold flakes in the drink. However, RDV is best served on its own and our customers usually buy it by the bottle and drink it by shots.” Morren responded.
RDV was launched in Hong Kong in November 2012 and aiming to enter the market in the Asia region within this year. “Malaysia is a growing market and is important to us. We hope to make the product available there in the next few months’ time.” Morren is in talk with some local distributors and we shall see who gets the bling bling to the bars which are mainly visited by the Chinese who regard dragon as a symbol of luck.
When asked about if the brand will consider flavouring the vodka, Morren response was: “Why taint a spirit which on its own tastes the best?"