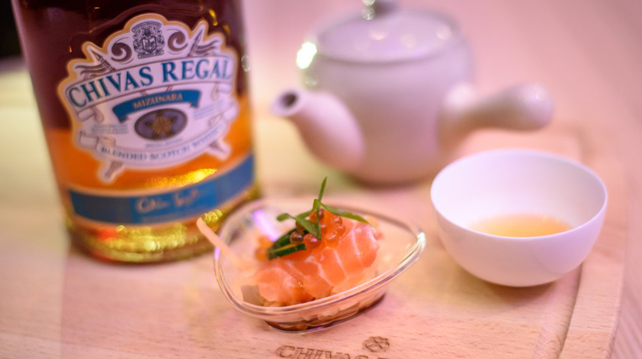 Just last week, the special edition Chivas Regal Mizunara was launched Pernod Ricard Malaysia’s very own in-house Bar des Embiez, the highly coveted blended Scotch whisky where part of the blend was matured in Japanese Mizunara oak casks. We had a sip of the interesting whisky and thoroughly enjoyed it. We'd be lying if we said we didn't get a kick out of it.

"The whisky world is wide and varied, steeped in craftsmanship," said Pernod Ricard Malaysia Brand Manager Benedict Yong. "Japanese powerhouse whiskies were inspired by Scottish whiskies to begin with. Now we have an instance of paying homage the other way around, a blend inspired by a Japanese influence. To say it is an exciting addition to our line-up here in Malaysia is an understatement."

So what do we actually know of the whisky? Let's investigate.

Fact #1
Mizunara is a type of rare Japanese oak – in Japanese 'mizu' means water and 'nara' means oak. It was used to age whisky in when Japan was unable to import spirits from Europe and America during World War II. The Japanese then discovered that it takes more than 18 years but less than 50 years to age a well-balanced whisky using Mizunara oak.

Fact #2
The Japanese oak has a higher moisture content than other types of oak, making it very permeable and prone to leaks. An ideal Mizunara oak tree would have to be over 150 years old before it can be made into a cask. Mizunara trees are also rare and do not grow upright, making it hard for whisky-makers to create casks out of them.

Fact #3
Mizunara whisky has a rich and fruity scent of pear and orange. On the tongue, it tastes of earthy tones like aloe wood and a hint of hazelnut. It's also silky in texture and has a spicy finish to it. Whisky makers like to let the blend age longer in the wood as the flavour continues to improve with time.

Chivas Regal Mizunara is available at selected restaurants, bars and hypermarkets in Malaysia. Prices for a cask varies depending on outlet promotions and packages.