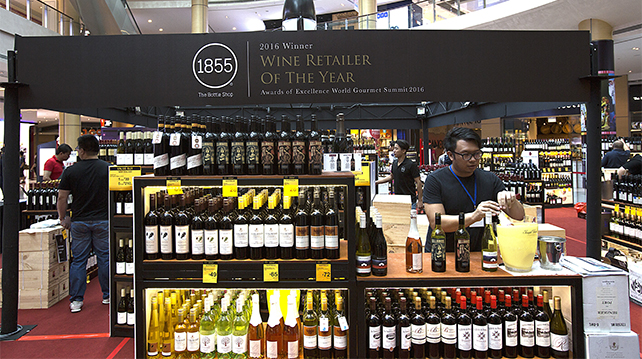 1855 The Bottle Shop will be hosting the second Wine & Whisky Week (WWW) at Suntec City Tower between 8 and 13 November 2016. Taste more than 500 labels by 200 producers from over 20 countries. Free wine masterclasses are also available on 12th and 13th.

Purchases
There will also be a showcase of the best cult wines from different regions, sought-after Grand Cru Bordeaux wines from acclaimed wineries, as well as rare whiskies from notable distilleries. Guests can look forward to discounts of up to 50% and add the following in-demand labels to their shopping cart: Chateau-Figeac, Pape Clement, Opus One, Two Hands, Dom Perignon, Yamazaki and Karuizawa. All wines and spirits will be selling from SGS16 per bottle onwards.

Gifts
Get an exclusive 1855 Neoprene Wine Bottle Tote Bag with a minimum spend of SGD500. The first two customers who spend SGD8,000 in a single receipt will walk away with a Vintec V30SGME wine fridge, which can hold up to 30 bottles and is valued at S$958 each.

Prizes
Attractive prizes including Chateau Pichon Longueville 2011 (worth S$180), Macallan Edition 2 (worth SGD150), Nikka From The Barrel (worth SGD90) and Bollinger Special Cuvee Brut (worth SGD80) will also be available during the 6-day event.

Masterclasses
Venue: Bistro 1855
RSVP: info@1855thebottleshop.com or via Facebook.
(Limited to 20 seats each class)