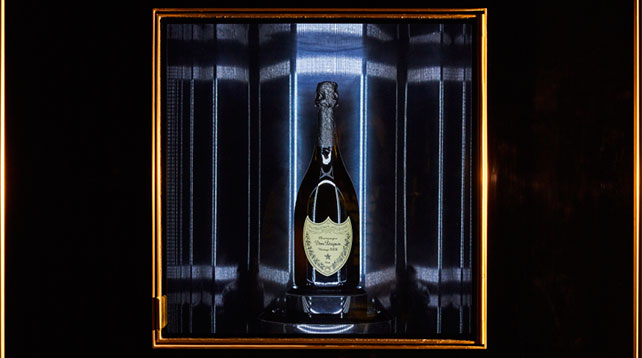 The idea of a Champagne dispensing machine came from a light-hearted conversation 5 years ago between Shannon Bennett and a group of diners leaving his restaurant, Vue de Monde on the 55th floor of Rialto. The diners had been celebrating a business deal when, while they were in the lift, one said it was a shame they couldn’t take a bottle of Champagne with them. Bennett proceeded to take the lift back up and got the patrons a bottle, saying, “Look, you know this is a human vending machine”. What a good idea, thought Bennett.

A Champagne bottle isn’t put in a vending machine because there is a chance that the bottle might explode when it drops out. So the brief to Will Colhoun of Big Kahuna Imagineering was simple: to create an opulent vending machine that dispenses Champagne, without blowing it up.

Instead of a drop down machine, the bottle is “lifted out” and collected at the opening of a square glass door. The only accepted currency for the machine is a Dom Pérignon branded brass token at the price of AUD290 for anyone who dines or drinks at Vue de Monde. The 2016 vintage is charged at retail cost thanks to the lack of overheads.

Bruce Nancarrow, the brand manager for Dom Pérignon in Australia came up with the name for the machine after seeing all the robotics-work that was put into the machine. Once the Dom Pérignon token is inserted, the Illuminator fades to black for several seconds then lights back up with a 2006 vintage bottle of Dom having appeared, seemingly from nowhere.