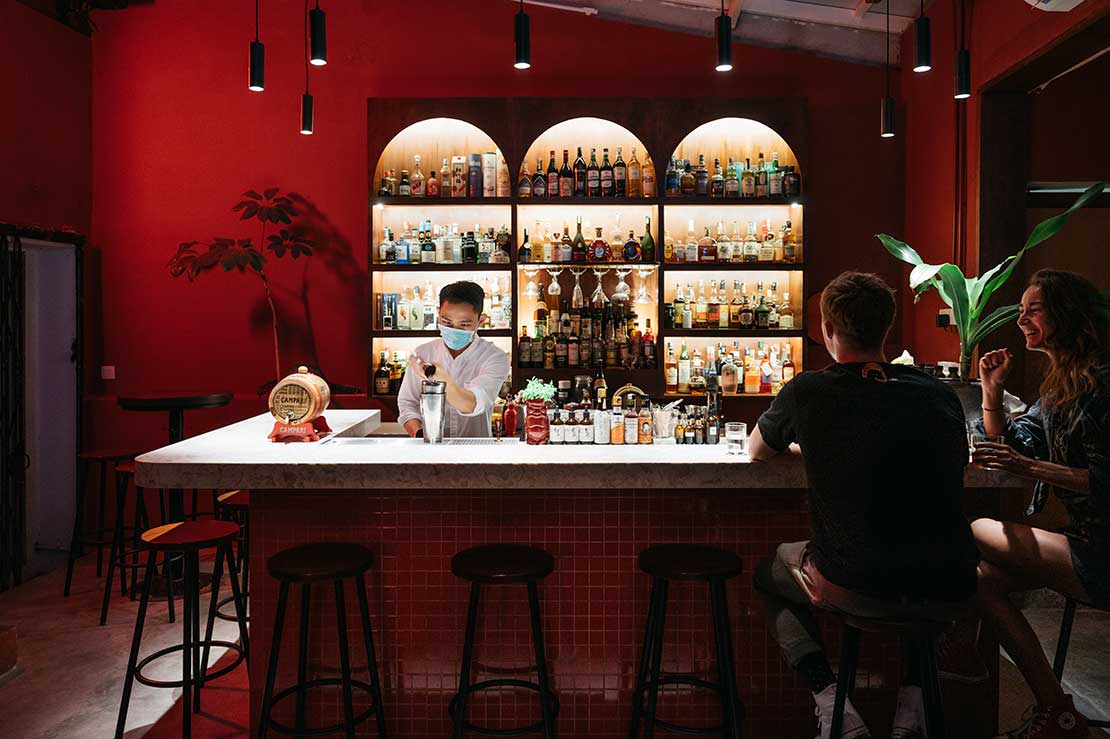 The Swagger Salon is a clothing shop near the Hin Bus Depot in Georgetown, Penang’s city centre, that sells locally designed t-shirts, caps and lapel pins. At night, the back of the shop turns into a speakeasy bar.

Koh Yung Shen, the designer who owns The Swagger Salon and the clothing brand LANSI since 2011 decided to convert the back of his clothing store into a watering hole in 2016 when he could not find a good place to hang out and drink cocktails.

Backdoor Bodega, which could only fit one bartender and a few customers, started to get noticed by Penangites returning to the island and tourists during Chinese New Year in 2017.

Initially his daytime staff in the shop would continue working after her shift to help him with waiting at the bar. As traction picked up, Shen installed a POS system and hired two bartenders, Ooi Foo Giap, who is still with the bar today. The two had to squeeze behind the tiny bar counter, but the cocktail bar was now in business and was here to stay.

By the end of 2019, the Penang bar scene was at its peak. The city was frequently involved in bar industry activities with guest shifts, Bar Awards program and even a whisky festival. It was time to renovate Backdoor Bodega and expand to a bigger capacity space.

We know what happened in 2020. In March, the global pandemic caused by Covid-19 hit and Malaysia entered its first lockdown followed by a second lockdown. The renovation only happened in July 2020 due to the frequent changes of standard operating procedures for all sectors. They only managed to re-open in December, but even then the renovation was not fully completed.

The travel ban was lifted by end of 2020 and things seemed to have returned to normal. The bar was so busy they had to turn customers away, that is until May 2021 when the number of infections rose, and a third lockdown started.

A post shared by An Overpriced Pin Shop (@backdoorbodega)

While most bars either depend on food ordering platforms or direct messages to manage their orders, Backdoor Bodega used their online clothing store to list their cocktails. Their existing resources helped give them time to come up with new drinks, label designs and marketing stories.

Logistics is every F&B outlet’s headache but the retail store’s long-established account with DHL gives Backdoor Bodega a reliable yet affordable solution, which allows them to ship to East and West Malaysia free of charge. Backdoor Bodega’s cocktails are reasonably priced between RM35-RM45.

“The margin is low but if there is a good quantity, it helps. It is also labour intensive compared to packing t-shirts,” Shen chuckled. “Now we have to make the drinks, print the labels, carefully pack every bottle to avoid breakage… unlike just serving it in a glass. There is also the customer service side of things when people expect to order today and receive the next day. It is hard work, but it keeps us busy,” Shen continued.

The line of apparels and merchandise in The Swagger Shop has been based on parody, something that works very well for them. The shop is also known for selling “overpriced” lapel pins, but people love them.

Shen applies the same philosophy to the cocktail recipes and label design. He noticed that people were spending more time on social media and the bar needed to post something unconventional so that people would share. Their first cocktail series was the Chinese New Year (A Little) Essence of Chicken, (Macam) Ginseng and (Not) Bird’s Nest. Sales soared as people were buying them as gifts.

A post shared by An Overpriced Pin Shop (@backdoorbodega)

Then in June, Giap came up with the vaccine idea based on the three types of vaccine used in the country’s National COVID-19 Immunisation Programme. The ingredients were based on the vaccine’s countries of origin: digestif from Germany’s Jägermeister in Pfizermeister, gin from the British brand Tanqueray in Extragineca and baijiu that represents China in Sinosour.

“It was a lot of fun coming up with the names, recipes and labels. Our customers mostly heard about us from social media and word of mouth,” explained Shen when asked about sales of their cocktails. So far, the bar managed to pay rent and full salary to all their 5 staff. It helps to have another income from the clothing shop, but Shen is just glad to stay afloat for now.

Despite the difficulties, Backdoor Bodega have stuck with their cocktail pricing and offer free delivery nationwide.

After the renovation, Backdoor Bodega has since expanded further to twice the space by taking over the motorcycle shop next door. Penang has been given the green light for dine-in as the island enters Phase 2 of the National Recovery Plan, but the bar has decided not to open just yet.

“We want to make sure it is safe for everyone before opening up again,” said Shen. “Most Penangites only had the first dose (of the vaccine) and most people probably won’t want to come out anyway. It is risky to reopen if the cases don’t go down. We don’t want to have to go through the process of sanitizing the place should there be an infected case in our outlet. We also don’t want to risk breaking any rules, so safety and our staff wellbeing are priorities right now.”

Backdoor Bodega’s latest cocktail Cap Pintu mocks the everyday drama reported about the country’s current situation. Follow them on Instagram for latest updates and order the cocktails on their website. Delivery continues to be free nationwide and may take up to three days to arrive.