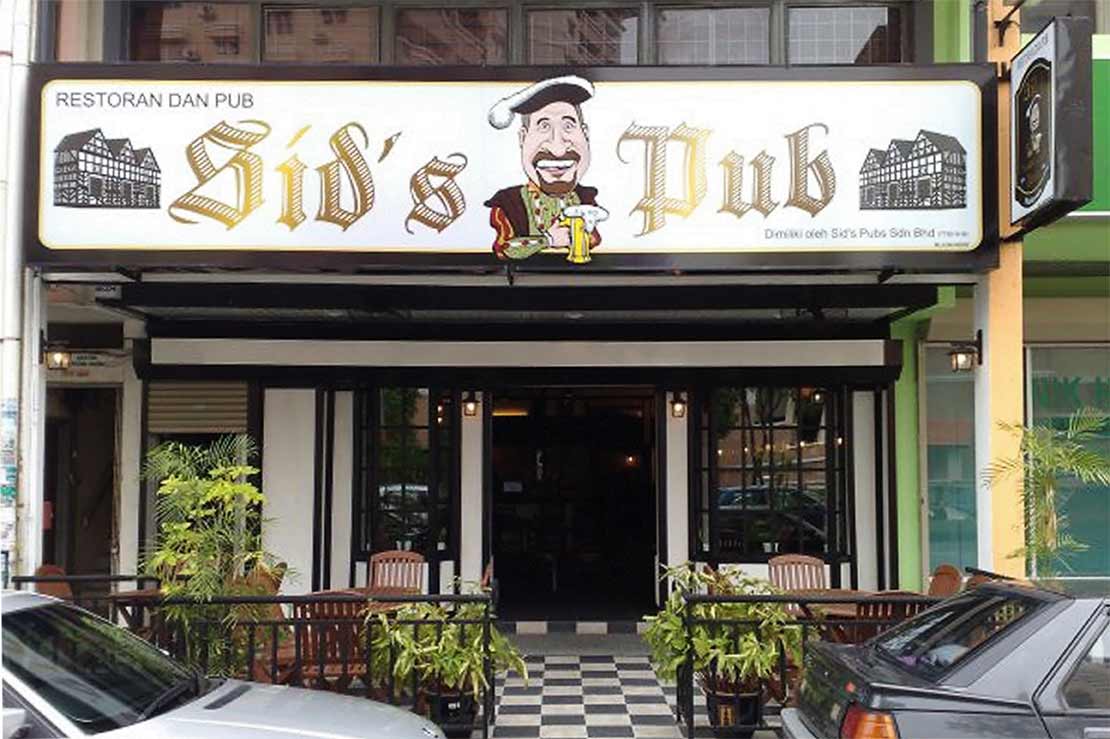 A pub to Malaysians takes on numerous forms: a place to watch sports; a restaurant with hearty food; a music venue to sing karaoke or listen to live bands; or an entertainment hub with drinking games and pool table.

The pub, short for public house, originated in Britain, spreading across the world as well as in Malaysia, with most having been localised to serve their local communities. Sid’s Pub, operating since 2007, is the one brand that stays true to its British origin, regarded as their neighbourhood pub by expats and locals alike.

Named “The Best British Overseas Pub 2012/2013” by The Daily Telegraph UK, Sid’s Pub has been recognised for serving hearty British meals and drinks in a comfortable and safe environment, ensuring a peaceful dine-in whether it’s for a family or a single woman.

For 15 years, owner Geoff Siddle developed the brand sith a close team and brought the concept to several parts of Malaysia. At one point, there were eight Sid’s Pubs in the Klang Valley and one in Melaka.

Geoff moved to Malaysia 25 years ago from Singapore and opened his first establishment on Jalan Hicks (now Changkat Bukit Bintang), Long Island Ice Tea House. It was one of two bars on that street alongside The Little Havana and operated out of the unit that currently houses Ciccio.

Long Island Ice Tea House was a rustic cocktail bar with low tables and chairs, big cushions to lounge on, and an outdoor patio. The beautiful neighbourhood bar offered a relaxed atmosphere and soon attracted affluent locals and expatriates.

The bar was forced to shut down by the local authority only after a few years as the landlord had failed to convert the property’s license to a commercial one.

Geoff was later approached by the Finnegan’s group to help open their second outlet in Desa Sri Hartamas in 2000 and made the General Manager for the Irish pub chain. He left the group in 2005 which last operated out of Midvalley and ceased operations in November 2013.

When Geoff starts Sid’s, he moved away from the city centre to his own neighbourhood in Taman Tun Dr. Ismail. The outlet was an instant hit for offering authentic British pub grub, welcoming family vibe, fresh beers and being pet friendly.

Two years later, the brand started its first expansion, and opened two outlets within six months in the nearby neighbourhoods of Bangsar South (May 2009) and Bukit Tunku (November 2009).

The Damansara Height’s outlet, which is still in operation today, was opened in 2010. After that, the brand became a neighbourhood destination with following openings of Sid’s Handler Bar in Jalan Tandok, Bangsar, in Kuala Lumpur Golf & Country Club (KLCG), El Sid’s with a Mexican menu in Damansara Heights and down south in Melaka by Jonker Street.

Sid’s Pub started winning awards since 2009 and in the following years from Time Out KL Food Awards and then the Best British Overseas Pub 2012-13 by Daily Telegraph UK.

While Geoff ran the show with a team, his daily routine became office bound and time with the customers becamse less, the part of work he enjoyed the most. In 2019 Geoff reduced the number of Sid’s Pubs from eight outlets to two, the one in TTDI and Plaza Damansara.

It has been Geoff’s plan all along to open 25 Sid’s Pubs and the ambition still holds today. “Sid’s Pub is a recognised neighbourhood brand, our clean and friendly concept will stay relevant for a long time. It doesn’t matter if it is in Penang, KL, Melaka or Sabah, when you see Sid’s Pub you will go back because you know what you will get,” according to Geoff. The brand speaks for itself as Geoff occasionally receives messages on social media asking him to bring the pub to their neighbourhood.

The next move is to let anyone who wishes to open a Sid’s Pub have the ability to do so. “All you have to do is to find a venue. I will take care of the back of house, train your staff in our Damansara outlet and our menu,” said Geoff who is ready to help others use his proven successful format and the Sid’s brand for future expansion. Afterall, he has 35 years’ experience in the F&B business operations out of which 15 years have been in building the Sid’s Pub brand.

The global Covid-19 pandemic has held back many businesses especially the F&B industry in Malaysia. Sid’s Pub, being a restaurant and bar, has been barely covering its overheads through food and drinks delivery but as they are still paying a full staff salaries, rentals and utilities, it is putting a lot of stress on the sole proprietor of the business.

Nonetheless, the preparation for re-opening has been taken. The outlets have had all the staff vaccinated, cleaned the air-conditioning units and done disinfection. “We are ready as soon as dine-in is allowed.”

Follow Geoff Siddle and Sid’s Pub Facebook Group for the latest updates and to get in touch for opportunities.