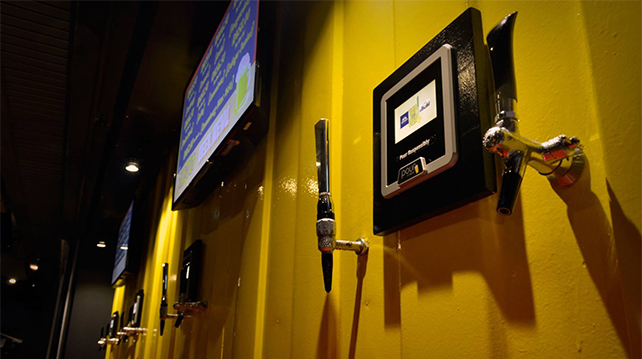 Carlsberg has partnered with Tap-It-Out, which allows patrons to dispense their own beer from an automated teller machine (ATM) format. The idea was brought in by three partners, Ethan Yoon, Ryan Foo and Joltan Ng. The self-service machines let patrons tap and pay for any amount of their own beer using a beer pass to skip the long waiting time to be served.

Patrons will only have to buy a beer pass from the counter, select a beer tap, scan the beer pass on the monitor, select the amount and start dispensing. The pass and its credit have no expiry date and are reloadable in multiples of RM50.

There are 22 taps at the outlet that offer nine types of draught beer including Carlsberg, Asahi, Connor’s, Kronenbourg 1664 Blanc, Löwenbräu, Erdinger Weissbier, Hoegaarden, Stella Artois and Leffe. TV screens are installed alongside the beer taps so that you don’t miss the game while pouring yourself a beer.

Other than beer, the outlet also offers wines and spirits.  Full meals and games such as beer pong are available to keep patrons entertained. Enjoy views of the city by sitting in the alfresco area.