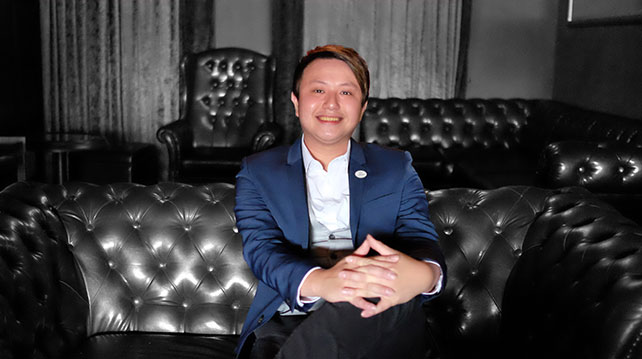 Known for his outstanding flairing skills and strong Asian-influenced cocktails, David has always applied the combination of both performance and taste experiences for his guests. A swoop of the jigger, shaker somersault, slight twist of the wrist, a slip of the barspoon, make shaking look effortless… these little movements can be seen used skilfully in David’s cocktail making, every time.

“Every bartender should develop his/her own style. A healthy cocktail scene should comprise of different types of bars and bartenders that provide variety to the market because different consumers want different things. This is the part that is lacking in the Malaysia market because the range of spirits and resources are limited in Malaysia. However, our multi-cultural heritage gives us advantages because that gives us more ideas, creativity and possibilities based on the combination of different cuisines, cultures, languages, and backgrounds.

It’s not only the performance and presentation of the drinks that you are getting from David, it’s also the professionalism. He’s chatty, and you can tell he wants you to have a good time at his bar. Anyone who has tried David’s cocktails know his drinks are strong yet balanced in terms of ABV and flavours. He’s also a believer in using Asian ingredients in his concoctions such as pei pa gou (枇杷膏), ginseng, tie guan yin… you name it.

Winning the World Champion of Giffard West Cup 2017
In the biennial Giffard West Cup 2017 final on 6th June, David competed against 18 bartenders from around the world in Angers, France, where the brand originated. This is the second time Giffard has opened the competition to include Asia. The finalists’ creations were based on three given concepts which were French inspiration, Asian inspiration and Emile Giffard Inspiration (a Black Box that came with surprise ingredients).

David Hans (Malaysia), Chrystine Lee (Singapore) and Sam Treadway (USA) were the final three contestants in the third and last round when David took the crown and became the World Champion.

It was the second creation, Dynasty Poem, for the Asian inspiration that made David stand out from the crowd. In this drink, David demonstrated the use of Giffard’s products in combination with Chinese tea providing a distinctly exotic and original perspective to the judges that he felt was new to the judges.

David has taken part in many competitions in the past, which he believes have provided him with the confidence in his presentation, speech and interaction with the judges in the West Cup. Also, Asia has only been included in the competition for the second time so far and that injected an excitement to the competition.

“When I joined the bar industry, I had to wait tables for 2 years before beings accepted as a bar back. After months of cutting fruits and preparing ingredients, only then was I given the chance to make drinks. This process has been sped up in many bars, some become junior bartenders after just 2 weeks of being bar back, skipping the chance of serving tables. This is even more so now that there are so many bars opening up, causing a short supply of bartenders (供不应求),” says David.

“One day you will be leading a team, that’s when the true test comes and you should not only know how to mix drinks but also how everything operates in a bar. Ordering, stock take… all from the basics. You can tell if a bar back puts his heart into his job. One simple thing, if a bar back has been washing glasses for half a year and when the day comes to order replacement glasses, this bar back had better know what to replace or there is really no point keeping him. This may seem like a small detail but it’s something not to be taken lightly. Imagine missing one detail in a cocktail, it’s going to change the taste of the whole drink. Washing glasses and cleaning tables might be seen as boring chores but they are tough when the bars get busy. Which type of glasses to clean first and which table to take care of first requires skills, a lot of organisation skill.

“I hope newcomers to the bar industry will pay more attention to building basic skills, take all the opportunities to learn and as much as you can. Train yourself to be efficient before thinking about making drinks. Attitude is the key. Stay humble no matter which stage of career you are in the industry.”

A bit of what David observed while in Paris.

European cocktail trend – Ingredients modification
Cocktail making in Europe has developed to such a level like chefs creating cuisine, modification of ingredients is not through mixing but by way of culinary arts. Compared to the east where we are still doing infusions, a direct way of creating new flavours from mixing existing ingredients, the way they create their cocktails is not directly decipherable by just reading their menu. An ingredient as minor as tonic water can be modified to create the bartender’s own identity.

David is currently the brand representative for Giffard. He also co-owns BarMvP, which is a consultancy firm that focuses on events and consultation to outlets. He aims to bring in more overseas bartenders for exchange programs.

David shared two recipes with us (with videos attached). Dynasty Poem is the twisted version of his winning cocktail in Giffard West Cup 2017 Finals. You will see some “Blue Blazer” action which was not allowed during the competition due to safety reasons.