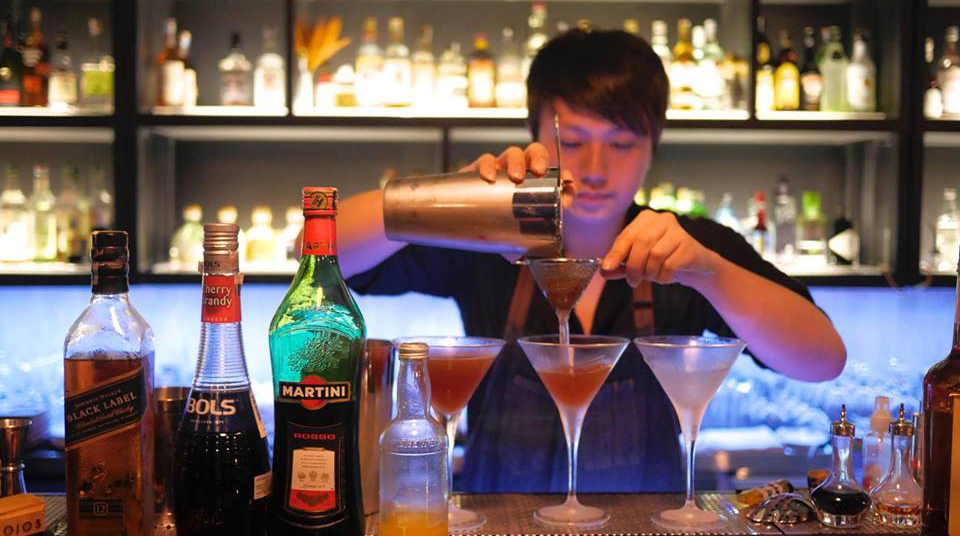 David Hans, the head bartender of Ojos, started his bartending career making classic cocktails. He then got very much into flair bartending and has become the pioneer in this segment of the industry. David is constantly engaging bartenders from around the world with the same passion in flair bartending and who are holding workshops for interested bartenders the opportunity to develop their skills.

David has recently started BarMvP that organises event and workshop on bartending topics. Here we find out how David got into the trade and what plan he has for the bartending community, especially flair bartending.

1. What made you want to become a bartender?
At the beginning, I was interested about everything in the bar which made me want to learn bartending. The more I learnt, the more passionate I became about the craft. Then I found out that bartending can be an actual career and profession. The rest is history.

2. How long have you been bartending and which part of the job excites you the most?
I have been bartending for around 6 years. My first bartending job was at Genting Highlands Resort. I like the service part of the job and it’s a lot of satisfaction to see happy customers. The other part of the profession that excites me is the opportunity to travel the world, make new friends and experience different things.

3. If you were not a bartender, what would you have done?
I would have been a chef. Before I stepped behind the bar, I was working in the kitchen during college, and I was aiming to become a chef then. Even till today, cooking is still one of my favourite hobbies.

4. What is your plan for your career?
I want to share my experience and guide the new generation of bartenders on how they can start a career in bartending. I must say, the Malaysian bartending scene and community is not as strong as many well developed cocktail countries and I would like to help to build it. And eventually, have my own little bar and that will make me very happy.

5. We have seen you do flair bartending and it seems you are quite seasoned. Isn’t flair bartending just a show?
One of my goals is to give flair bartending a positive outlook. Many people have the wrong perception about flair and think that it is a circus and unprofessional, which is not true. Flair bartending comes not only with presenting the art of mixing but also an impressive balance of bottle-handling, which can be cinematic. Furthermore, flair bartending is performed with real spirits bottles which are heavy. If you can still make and serve a proper drink in the end, that’s a full experience. Also, I want to build a proper direction for flair bartending where eventually, it can be included into a category in cocktail competitions.

Just to explain more on flair bartending. The technique doesn’t only involve flipping of bottles or shakers but also involves coupling mixing moves with bar tools and equipment at the station. This adds “flair” to the preparation of drinks. For example, spinning of the bar spoon, different cuts of pour, and even icing a glass with a smile while tending a bar are parts of flair-bartending.

6. What is your game plan for this?
Bartending is about hospitality, making your guest happy and making good drinks. Possessing solid knowledge about drinks is fundamental to bartenders. Good service comes with that. Adding a bit of personal flair is a bonus, and that sets you apart from other bartenders. The flair bartending scene is returning to popularity in recent years and I want to help grow this segment of bartending in Malaysia. Generally, most people still assume flair bartenders can’t make good drinks and I want to change that perception. Mixology and flair-bartending can be developed simultaneously. With this vision, I want to contribute to the local bartending scene in achieving balanced bartending through education, building value in bartenders from the very start of their career and nurture good attitude.