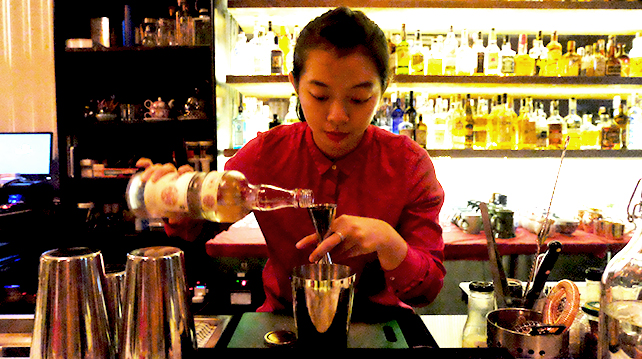 Recently won the Malaysia's Monin Cup 2016, Demitria will be competing in the Asia Pacific Final 2016 in September, which will take place in Kuala Lumpur. Wanting to know more about the talented young bartender, we asked her a few questions (just a few):

1. How did you get into bartending?
I came to Malaysia to study to become a pastry chef. During my degree in hospitality, I was exposed to bartending when I took part in my first beverage competition in the Monin Coffee creativity cup 2013. My mentor that time, Shaun Liew, motivated me to continue in the beverage direction. He said, "If you are passionate about it. Do It!" So I did! Then in 2014, I joined both mocktail and cocktail category of Monin Cup and I got to the finale in both categories. I got first place in the Mocktail category and 2nd runner up for the Cocktail category. From then on I worked as a freelancer for beverage events like Hennessy Artistry and Juice companies, and the rest is history.

2. What motivated you to become a bartender?
The journey to continue learning in life. I once watched Luca Cinalli's video on YouTube and found that bartending is actually a form of art. He opened my mind about bartending. It is not only about mixing drinks, it's about communication, service and getting to know people. A drink can turn strangers to friends so now as a bartender, my motivation is to combine the creativity and techniques of a baker, chef and bartender to create a whole new experience for my customers through drinks.

3. What does your family think about you becoming a bartender when you started and if that has changed since?
My parents always wanted me to complete my degree and open a bakery in my hometown, Medan, Indonesia. But I would always tell them that I want to learn more about the F&B industry before stepping into entrepreneurship. Thing is, every time I joined a competition I wouldn’t tell my parents until I brought home the trophy. They would always think that it was just a university competition for students, never did they think that I would choose to work behind the bar as a career. When I told them that I have accepted an offer to be a bartender at Lou Shang, they didn’t agree with my decision because they thought I would have to sleep during the day to work at night. Also, to my parents, bartending is making drinks for people in a night club with loud music. So I had to explain to them what my job actually entails and they gave me a chance to continue. After a few months working and showing them the cocktails that I have created, and being able to be independent, they are now happy with what I am doing. I have always wanted to make them proud.

4. Where are you now in your career and what's next?
I'm currently a bartender in Lou Shang and would love to learn as much as I can from people I meet to improve my skills. I will join more competitions and continue learning how to manage a bar. My goal is to one day open a hidden bar in my hometown.