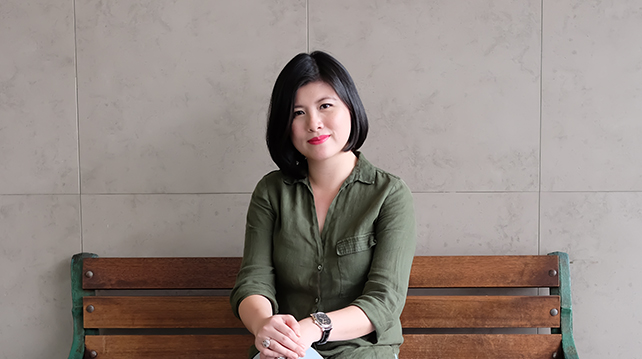 Malaysia's first independent bottler who is a woman

Lately, in the market, we have been getting supplies of rare single cask whiskies produced in small batches by independent bottlers at reasonable prices, similar to any commercial bottling between RM300 – RM500 per bottle. Why bother with this if there is already all that supply from the big distilleries? Simply so that you can try more variety of whiskies that are straight from the cask as their original expression. Lim Eiling is one such independent bottler who was determined to introduce more distinctive whiskies to the Malaysian market by starting the business 3 years ago in Belgium.

Started as an afterthought

“The first batch of bottling was from a closed Lowland distillery, Littlemill. When we (with husband Luc Timmermans) bought part of the barrel, we only wanted to have it because it was so good. Bottling was an after-thought and the start of my independent bottling adventure. To date, 13 batches have been bottled under the Eiling Lim brand.”

Eiling’s Littlemill 1990 23YO (49.8%ABV) ended up in 68 bottles from a shared cask that was quickly snatched up before it was even released. “Word gets around quickly and people know when it’s a good whisky,” says Luc Timmermans, who is an ex-independent bottler himself under the Thosop Handwritten label. He has over 5,000 whisky tastings from the past 20 years in his whisky library and is also an ex-Malt Maniac, a prestigious recognition in the whisky industry. In the beginning, Eiling’s bottles still had Luc’s name as recommended but it soon became unnecessary when the brand quickly gained a reputation among whisky lovers.

When asked about the biggest obstacle faced in the Malaysian market, Eiling said that education is important because many whisky drinkers don’t really understand that there are regulations in whisky production. “I get people who ask me if I ‘made’ these whiskies (in Malaysia) in my house,” with a helpless smile.

To be qualified as Scotch whisky, the spirits have to be produced and distilled in Scotland, aged in oak barrels for at least 3 years and bottled in Scotland at a minimum 40% ABV. “But I am made in Malaysia!” said the Ipoh girl cheekily.

Eiling’s surname “Lim” in Chinese is a combination of two “wood” characters – 林. It is apt, as wood is essential to making good whisky and the calligraphic character on the label makes the brand stand out.

It is the independent bottler’s mission to introduce more whisky options to the Malaysian market. “I want people to know that you have to keep trying different types of whisky to find out what your favourite is. Ruling out whisky because you have tried just one which happens to be one you don’t like is such a shame.”

Though the general market sentiment is less encouraging, the actual excitement is among true whisky enthusiasts who are knowledgeable and appreciate the value of good content in independent bottlings.

How is a whisky chosen for bottling?

Eiling and Luc have to taste 20 to 50 types of whisky at every single tasting. Their source would supply them with samples and they have to taste them quickly and decide on their prediction fast. Good whiskies are bought up at the speed of lightning and there is simply no room for procrastination.

The nose of the whisky is the most important as there is no point bottling something that doesn’t have a good aroma to start with. Then it is the test of the palate: the whisky must have the right flavours and be balanced in its taste and finish.

Whiskies that are picked out during the first tasting will be put into a second tasting the following day, right after breakfast before noon, while the tasters’ palates are still fresh. The second tasting will then determine whether the whiskies are truly the ones they want to bottle.

Lastly, it is pricing. It has to be a reasonably priced and affordable whisky. In recent years, whisky has become an item of investment with high price bids during the auction. Many high-value whiskies are not in fancy bottles because people buy for its contents and not for the packaging. An example would be Eiling’s first bottling, Littlemill 1990 that is now triple the original price when it was first released in 2014.

A project of passion in small batches

“Many major independent bottlers buy a big lot of barrels to bottle from. They have to do this because selling whisky is their bread and butter.” For Eiling, this is a project of passion with her husband and they make sure that whatever they bottle are whiskies that they will drink themselves if they don’t sell out. So far, all Eiling’s bottles are snatched up even before they are released.

Being an independent bottler might sound glamorous but it is also a lot of hard work. There aren’t many of them out there simply because it’s not easy to get casks, hence the source is the key. Distilleries don’t sell their casks to anyone, even with good relationships. Distilleries are normally owned by big brands and have their own bottling plants and blends. Their limited edition is 20,000 bottles compared to independent bottlings with as little as double-digit bottles. There is really no incentive for distilleries to sell individual casks.

Eiling allocates 40% of the stock to Malaysia, 60% to Canada and Europe, with small quantities going to Taiwan and Australia upon request. Wholly Spirits distribute Eiling’s bottles, and drams are available to taste in The Whisky Bar KL. For updates on new releases, visit her website at www.eilinglim.com.