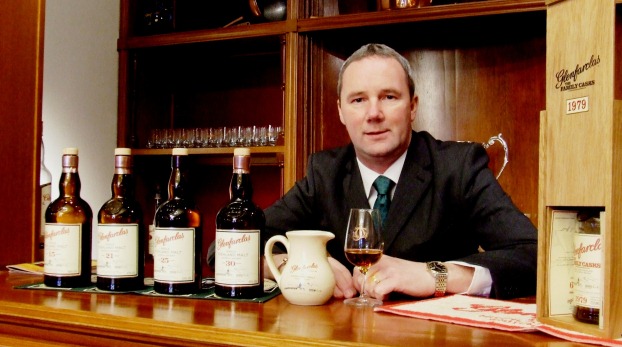 Kim Choong talks to Ian McWilliam, Marketing Executive for Glenfarclas whisky about his 21-year journey in Glenfarclas and his passion in the family business.

How did you start working with Glenfarclas?
I had a first brief encounter with Glenfarclas when I was 17 and did some building work in the distillery.  Years later, due to my golf hobby, I met the Glenfarclas manager at the time and it happened that they had a position I could fill when I asked. He offered me a warehouse position, working with a team of four other people in the warehouse. That’s how it all started, that was 21 years ago.

How did you get to your current position?
It was a coincidence that just as I joined the company, someone else left and I became Assistant Warehouse Manager. I was responsible for being the key holder. I spent three and a half years working in the warehouse, after which I wanted to get involved in production. After I was there for around 8 years, the Assistant Manager at the time was due to retire and I was asked if I would like to take his position, which I happily accepted. So I spent three years as the Assistant Production Manager, and that meant I had to move to the company house near the distillery, as I was responsible for the delivery on site. That was another three years. Then there was a leap from being in production to getting involved in the sales and marketing side of things, which is my current role. The owner of Glenfarclas, John Grant, asked if I could build a bar for him for a big expo in France. He was very pleased with my work so he asked me to join the team to the expo, so that I could put the bar together for them. That was about 14 years ago. After the second expo, a position was created for me and that is the current role I am holding.

You don’t miss the production line?
Not terribly. I still live in the company house and still remain on-site and am on call, so I’m still involved in the production once every three weeks, when I am not travelling around the world promoting the brand. It is a small company, where everybody works together. All the employees are part of the team and we are like a family. We still get together with John Grant and his wife whenever there is a big celebration such as Christmas. This is very rare in big companies.

When you started out at Glenfarclas it wasn’t out of a passion of whisky … what makes you so passionate about it now?
I think it’s just being someone local to that area and having a business in that area that is family-owned, being passed down from father to son. My grandfather was a local butcher and used to deliver meat to George Grant (the third generation – John Grant’s grandfather), my father’s friend was a Distillery Manager … there has always been this connection somehow. I have been working with Glenfarclas for 21 years now, and if I didn’t have any passion about the whisky by now I wouldn’t have any passion for Glenfarclas. When I look at all the whisky I brought over and sold, they were the 12, the 15, the 17 and 21 years old, and the fact that I was part of all of them – I just feel very proud.

Would you say Glenfarclas is a famous brand around the world?
It is well known among the Single Malt Whisky brands. We don’t have a large marketing budget like many multi-national companies, as Glenfarclas is a family-owned business. We like to be traditional and focus on the quality of the whisky. We are not really promoting it as a global brand, we prefer to promote Glenfarclas personally. It is nice to support a family business.

Where do you see the brand going?
The brand is doing quite well. Last year was our 175th anniversary, and despite the recession and the fact that 2011 was a difficult year for the European economy, we still hit a record year for sales in Glenfarclas. We are definitely heading in the right direction at the moment. Obviously the anniversary had helped us in getting some exposure from the press and media, and that also helped the sales.

What do you think about whisky culture in Malaysia?
As in the rest of Asia, there is great potential in the Malaysian market for selling Single Malt Whisky. We have seen good growth in the past few years.

Which is the most popular year for Glenfarclas whisky?
15 years is the most popular for Glenfarclas in Malaysia, even though there are so many popular whisky brands out there which are perhaps better known for their 12 year old. Sometimes those who drink 12 year old have not even heard of Glenfarclas but if you are comparing us at the 15 year level, we are better known because usually 15 year old drinkers are more mature whisky drinkers and they are also perhaps more knowledgeable.

How do you describe Glenfarclas 15 years old?
It’s a very chewy whisky, full-bodied, leaving long lasting flavours in your mouth.

Which is your favourite year for Glenfarclas?
15 definitely, but once a while, I like to have the 21 – especially in the cold Scottish weather.