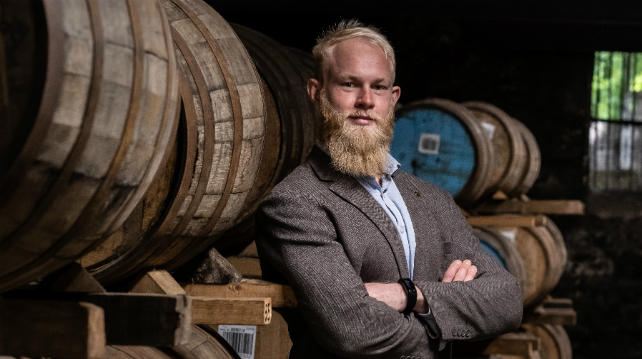 A sit-down with Jasper Epsom, brand ambassador of Chivas Regal in Malaysia

You may have seen Jasper Epsom around KL in the last few months, at Chivas tastings (or handing out Chivas mini bottles while dressed up as Father Christmas), Pernod Ricard events, or at some of our local speakeasies – his formidable blond beard sets him apart.

“It definitely helps me distinguish myself from other people” the Chivas brand ambassador says, adding that he started growing it when he began studying for his Masters in frigid Scotland. “I thought a little bit of extra facial hair would help keep me warm, but also have something to stroke as I ponder deep meaningful questions.” he adds playfully.

But he could not have imagined ending up in Malaysia. Born and raised in Kenya, Epsom went to boarding school in South Africa, before attending university in Cardiff, Wales, then progressing further north to his Masters in Scotland, where he eventually joined the Chivas Graduate Program and earned the position of Brand Ambassador in Malaysia for the blended Scotch whisky. “I was a bit anxious when I was offered the position, because if I’m honest I knew Malaysia was in Asia somewhere, I didn’t really know where it was on the map, and I knew very little about it. It was like going into the unknown,” he admits, “but it’s starting to become clearer to me what it’s all about, and so far it’s been really great.”

Since arriving in November, he’s thrown himself headfirst into his role as the face of Chivas, educating Malaysians (consumers, bartenders, outlet owners, etc) about the brand, how the Scotch is made, where it comes from, and the history and heritage behind the brand. He joins a growing collection of brand ambassadors in KL who are on the ground to oversee the market.

Epsom looks after the whole of Malaysia, just as certain other countries in the region have their own dedicated brand ambassadors as well (e.g. Singapore, Hong Kong, Vietnam – the bigger markets). “I think it’s a really good way of doing it,” he says “In particular for whisky, there’s a lot of misunderstanding and miscommunication that all gets tied up in this marketing jargon that confuses customers a lot, so people don’t know what the difference between a single malt whisky and a blended whisky is, or they refuse to drink a blended whisky because they think it’s inferior.”

Epsom adds, “By sending someone out there…slowly the knowledge will start to spread, and hopefully uplift everyone, so everyone understands it better and has a better base on what the differences between the different products are, the different casks, how it’s made etc. That’s the most important thing: be on the ground, share knowledge, erase myths, improve people’s understanding of the product and of the category in general. I am the Chivas ambassador, but I see it as my role to educate people about Scotch whisky because there’s a lot of confusion.  That’s why I’ve been sent out here, and I think that’s why Jameson and Martell also have brand ambassadors. And it’s not just Pernod Ricard, it’s other companies doing the same thing purely because having someone represent the brand, be a face for the brand, and to help educate people is very useful.”

Chivas has activations like The Blend, where consumers and bartenders are invited to come in for a hands-on experience of blending their own whisky and learning the process behind it, eventually taking home with them this very unique souvenir. Little things like this engage and educate the consumer in a fun and practical way.

In a sense, it’s also how Epsom solidified his knowledge of Chivas, and whisky – thanks to visa delays before coming to Malaysia last year he was able to be more hands-on in the distillery, working with the staff and “turning the knobs and switches” as he put it. His Bachelor’s in Hospitality (he briefly worked as a bartender and a barista) and Master’s in Innovation and Entrepreneurship may have laid some basic groundwork, but his time in the distillery was the greatest learning curve.

“I’ve definitely learnt a lot, but there’s still a lot more to learn,” he ruminates, “It’s a fascinating subject, whisky, and there are so many different categories within the whisky category itself. What fascinates me the most is that all whisky is made using the same three ingredients (malted barley, water, yeast) yet there are all these different characters and flavours across the different whiskies from the same three natural ingredients. A bit like humans, you know, we’re all made of blood, flesh and bone, we’re all the same fundamentally on the inside, and yet we’ve all got such different characteristics.”