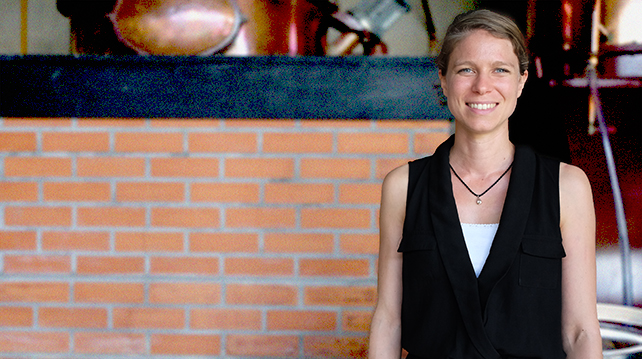 The woman behind an unbelievable mission

At 24, Marine wanted to move to the other side of the world to distil spirits. Recently graduated from university with little working experience, her parents tried to convince her to gain a few more years experience before starting this adventure. "Why wait when you can do it now?" she thought, so she packed and went to Thailand with her partner, Thibault Spithakis.

Six years later in 2016, the distiller created Chalong Bay Rum, a pure sugar cane rum, naming the spirit after the beach near where the distillery sits (“chalong” also means "celebration" in Thai). The agricole-style rum has won several awards since 2012.

"Phuket holds a special place in my heart and I can't tell you how grateful I am to the people on the island after the tsunami in 2004. So many people died but my family survived. I believe there is a reason for that." So when Marine and Thibault decided they wanted to start a business together, the location was never a question.

Chalong Bay Rum was established out of a passion for the production and science of spirits making. The production process follows the traditional French technique that is used in Caribbean rum-making, and is distilled in an imported copper still designed by an 80 year old French Armagnac still maker who flew to the island and built it specifically for the distillery.

With few resources in a foreign land and needing help, Marine went on the search for people who would believe in her project and willing to go on this crazy adventure with her and Thibault. The first person who joined the project was by chance. While getting a ride to pick up their car, Thibault mentioned to the driver that they were looking for people to join their project. Coincidentally, the driver’s friend who was following happened to be looking for a project to join. And that’s how it started. Since that person, Pang, came on board, she’s now one of the partners in Chalong Bay. As Marine says “What we do is so much about people and I believe that many things happen for a reason."

The land that Chalong Bay occupies includes all stages of production - the fermentation, distillery, stock storage, packaging, plus a new bar, and crops of sugar cane (not for distilling) and bananas. It also houses a cat and a dog that have made the place their home. When the distillery first opened 6 years ago, visitors were welcome to take as many photos as they liked but once Marine found out that people attempted to copy the design of the stills, signs were put up around the stills to stop people from taking photos.

Thailand doesn’t exactly have a high reputation when it comes to distilling spirits but the work at Chalong Bay has slowly changed the perception of the locals as well as the Thai authority.

There are many restrictions in Thailand on alcohol production but they are mostly in favour of the big producers. On the other hand, the regulations for production quality in general, are loose. Competition is fierce among the smaller producers but the Thais have very little regard for locally produced spirits that are cheap and harsh to drink. Upholding the company’s strict self-created policy to never compromise on quality and retain transparency has, however, brought the brand a long way to now being recognised as the trusted brand from Thailand and something the locals are proud of.

The distillery works with local suppliers to support sustainable trade and promises to use the best ingredients. There are over 200 species of sugar cane in Thailand. The country is the 4th biggest sugar cane producing country at over 100,000,000 metric tons per year, after Brazil, India and China. Chalong Bay Rum uses only one species and, as the supply is seasonal, they can only produce 3 months a year. In 2016, 35,000 bottles were produced with every single part of the process manually done by hand. The sugar canes were handpicked to select the best of the batch for production and only the first pressed sugar cane juice is used, with the rest being sold to the sugar factory. Once the juice goes into production, Marine and the team stays with the tanks 24/7 to monitor the progress from fermentation to distilling, making adjustments, including temperature and flow rates, manually every step of the way.

They have recently added a vapor infusion component to the still, called Carterhead, a technique that's been exclusively used in gin and even so, there are only 5 worldwide. This allows the infusion to take place using the freshest ingredients without adding artificial flavours to the spirits. The vapour from the still passes through the ingredients, extracting flavours along the way before falling back into the pipe in the cooling tank. An additional 3 flavours have been developed the past year: lemongrass, cinnamon and sweet basil. For the basil infused rum, this meant Marine and the team handpicked the leaves off the stalks to make sure only the juicy, flavourful part of the leaves and not bitterness from the stalk get into the final product. As for the lemongrass – they hand cut over 14,000 lemongrass sticks into small pieces in order to extract the oils!

After distillation and the cooling tank, the spirit at 70% ABV is transferred to several tanks for maturation over a minimum of 8 months before bottling. Very little distilled water is added, depending on the volume of rum and the percent of alcohol, and dilution takes place slowly over the year.

Distilleries in Thailand are allowed to use any bottle for their products, but the only bottles available in Thailand are the recycled ones from the main commercial distillery – Thai Bev. Chances of getting flawless recycled bottles is so low, it’s almost unlikely. For Chalong Bay, they were losing at least 30% of the bottles they bought because they were too damaged and not presentable. To guarantee their own identity, and the quality and integrity of their bottles, Chalong Bay has since designed their own bottle but produced outside of Thailand. Importing the empty bottles to Thailand does mean that it's adding more to their production cost.

On the labelling, Marine initially wanted the label design to look local but the feedback was poor because of the low perception of Thais towards local spirits. So they went for a clean-looking design that makes the product look international. The brand has since been perceived as a premium product produced locally in Thailand, and the lack of “Thainess” in the design was a comment that started to come up. So when the 3 new flavours using Thai ingredients were released, the labels encompassed more Thai elements into them, like the names of the botanicals in Thai. The shift in local sentiment is giving Chalong Bay the confidence that they have acquired the recognition and have changed the Thai’s perception of local brand spirits. This, Marine considers, is a milestone achievement.

Chalong Bay Rum is priced at 620 baht per 700ml bottle to remain competitive. The price is very close to other locally produced spirits, but below imported premium spirits, that are mostly used in high-end hotels which account for most of Chalong Bay Rum's clientele in Thailand.

Within the last 2 years, Chalong Bay Rum has been exported to over 20 countries worldwide thanks to their export strategy. They present their brand in trade shows all around the world, including their biggest breakthrough achieved with La Maison Du Whisky. Marlene Leon, LWDW Singapore’s founder, promoted the rum in Europe and Singapore, where cocktail culture is at its prime and demand for craft spirits on the rise. Marlene Leon herself had said before meeting the team of Chalong Bay “The people behind this (rum) must be taking good care of the production. By the taste of it, you can feel that.”

“They think you're small and insignificant but ever since this distillery, people producing spirits are upping their standard in Thailand.”

To promote transparency of their work, the distillery is open for tours and lately, an addition of a bar at the premises where cocktail workshops are available to individuals as well as groups. "It makes their (Thai authorities) life easier when one distillery follows the rules," said Marine, further adding,  “I am proud because the government appreciates the cleanliness, quality and transparency of our operations.”

After Chalong Bay, there is an apparent improvement in the quality of spirits production in Thailand. People are putting more care in hygiene and safety of equipment used, and consumers are demanding better quality product.

The distiller is always on site. During our visit, she had her eyes fixed on the stills, and ears peeled listening for any irregularities. With a degree in project management, Marine is highly capable of looking after the whole operation at the distillery, and from what we saw, her life is now mostly spent with her work. For relaxation, "When I get to go out, my favourite hangout is Green Man, an Irish Pub where I can salsa." Dancing means letting go for the distiller. "It's nice to let someone else lead once a while. In here I have to make sure that everything is under control and when I'm on the dance floor, as how it usually works in salsa, the man can lead. That is when it is most meditating and relaxing.”