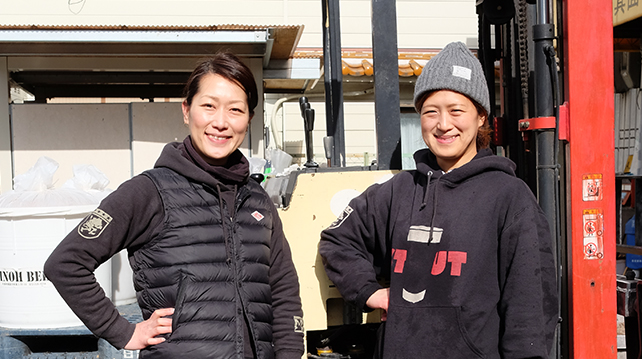 The women who move the Japanese craft beer revolution

[Main picture: Kaori, the eldest sister and the second, Mayuko]

Mino-o Osaka is famous for the Osaru (monkeys) and maple leaves. Minoh Brewery took the monkey as its mascot and its logo is of a monkey drinking beer on their packaging.

Minoh Brewery was the idea of the late Oshita Masaji, a liquor store operator who wanted more beer varieties in Japan.  In 1994, right after the law passed reducing the requirement for commercial beer production from a minimum annual volume of 2 million litres to 60,000 litres, Masaji jumped at the opportunity to look for a site to start his own brewery. He appointed the eldest of his three daughters, Kaori, to be the brewer. At that time, Kaori was still in college.

In 1996, Minoh Brewery was opened. Kaori had very basic brewing knowledge and received very little training before the start of the brewery, her experience mainly came from learning on the job. Through Masaji’s liquor store, Minoh beers were promoted to Osaka and Tokyo.

After the law was passed, many jumped into the business of brewing. Not only was Minoh facing the lack of experience and competition from over 300 other micro-breweries, there was also a growing resentment of craft beer due to the poor quality of most beers. Pressure from the big commercial breweries was great and Minoh chose to maintain its sales in liquor stores instead of to restaurants and bars.

The brewing community however, was helpful, especially Ise Kadoya whom Kaori learned from and improved Minoh’s beer. In 2009, Minoh received their first recognition for World’s Best Dry Stout by World Beer Award. Masaji was so proud of his daughter’s achievement, he flew with Kaori to London to receive the award in person. Minoh would go on and win medals every year in the World Beer Awards, and even today, continue to earn various awards and accolades worldwide.

On December 15th, 2012, Oshita Masaji passed away. 11 craft breweries, including Minoh, created tribute beers that represented their memories of the much respected icon. The initiative, called the Masaji Beer Project, was held in March 2013, a 3-day event of tastings, masterclasses and celebrations around their tribute beers. Every year since then, some of the breweries will brew a seasonal Masaji Beer Project beer for release in December, around the anniversary of Masaji’s passing.

As the business grew, Kaori needed extra help so she asked Mayuko, the second sister who was then studying in Australia to assist in the family business. Freshly graduated in 2000, Mayuko took up the responsibility of assisting her sister with brewing, bottling and labelling. At that time, everything was done manually in the small brewery in the Mino-o residential neighbourhood, where the brewery still operates to this day.

In August 2015, a bottling machine with a capacity of up to 2,400 bottles per hour was installed in the brewhouse. Labelling remains a manual process done in the warehouse. With the increase in capacity to 450,000 litres per year, Minoh opened the Minoh Beer Warehouse in October 2015, a neighbourhood bar with 10 taps that also sell bottles and Minoh merchandise. Other than beer, the sisters’ mother Itsuko Oshita makes jams and sauces with the ingredients from brewing (for example, the yuzu juice is made into ponzu while the peels are used in brewing).

The third sister, Nozomi Katsumi, finally joined the siblings in 2010, manning the office for the brand. Kaori has always been leading the brewery and has taken up the role of taking care of the business ever since the father passed away.

Due to their current capacity and high demand within Japan, Minoh presently only exports regularly to Singapore, and occasionally to other countries for special events. Eastern Craft Singapore started to import Minoh’s beers in 2012, and Minoh only has enough stock to do so twice a year. Head down to Jibiru at 313 Orchard, Takumi at Mandarin Orchard, or to various bars and bottle shops whenever the beers arrive in Singapore. Stock is limited and usually sell out fast!