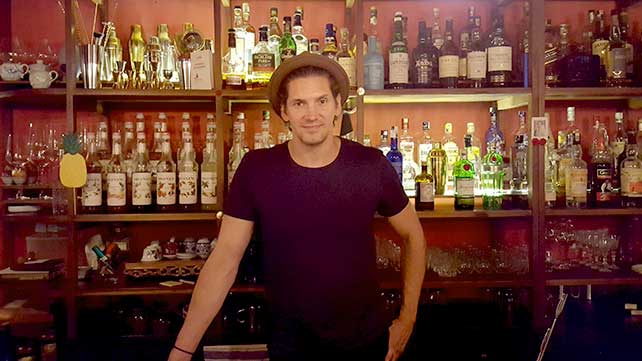 It’s unlikely you’ve ever met a person as passionate about pandan as Nico de Soto. The owner of the bars DANICO (Paris) and Mace (New York) has made a business out of concocting cocktails made with spices both local and exotic in his bar in the East Village since 2015, a place where he has raised the humble pandan leaf to heroic proportions.

Stopping over in KL on the second leg of his intensive Asia Pacific travels (which saw him in Australia first, then over to Jakarta, Singapore, and Hong Kong afterwards), de Soto is no stranger to extensive travelling – he’s been to 73 countries, using them for scouting to find the next inspiration for his menus. He confesses that he’s found most of his ideas in South and Central America, but also in Indonesia, where he had first come across pandan many years ago.

But what is it about the plant that he, and everyone who comes to his award-winning bars (Mace has been on the World’s 50 Best Bars twice, ranking #38 in 2015, then #28 in 2016), loves so much? “The nuttiness,” says de Soto, “and in drinks it brings a long finish, which is very different. We have a drink called the Nutmeg which is made with absinthe, coconut milk and pandan syrup; and because we infuse spirit with it, the taste of the drink will stop, and then you have the long finish of the pandan after. And that’s unique…no other plant does that.”

He’s become something of an unofficial ambassador for the herb in France and America, with bartenders in his home country following his example and putting a massive spotlight on it, “There’s an article in France that says ‘pandan is the new trend in cocktails thanks to Nico de Soto’. Beyond that now there’s an article in the New York Times claiming that I’m the one who’s spread the love for pandan, and I’ve received a letter from the Consulate of The Philippines saying ‘thank you so much for the article about pandan, we’re going to come to your bar!’…it’s becoming out of control almost!”

But while it seems to be winning hearts in the West (the Pandan cocktail is a menu mainstay in both Mace and DANICO, and Monin have also released a pandan syrup), de Soto wasn’t impressed by the quality of the pandan cocktails here in KL – “The pandan taste was so mild, you almost couldn’t taste it,” he says about one place, adding, “You have pandan everywhere…you don’t want to put it in a drink maybe because it’s too common?” Which is an interesting point: considering how widely pandan is used in local cuisine, it could very well be that the flavour has no novelty for Malaysians. But when you consider how popular assam boi cocktails are, that argument doesn’t seem to hold up.

De Soto loves the versatility, making infusions and syrups in-house – “To make a syrup…I blend the leaves, put in a bit of salt and sugar” – sourcing frozen pandan from Chinatown in New York. He’s currently talking to a liquor company to do a pandan syrup of his own. No further details were shared, but we’re sure they’ll be flying off the shelves once they’re officially on the market.