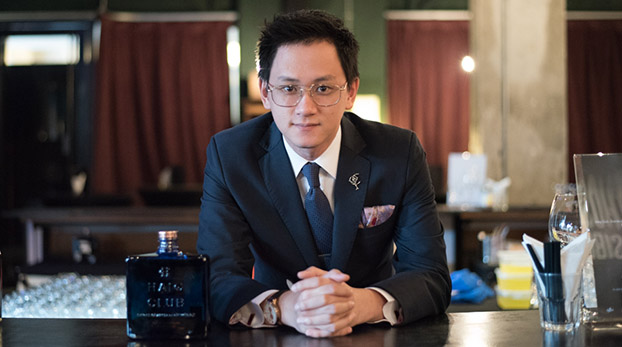 Tell us about yourself - when did you start bartending? When did you join the World Class competition?
I first started in the beverage industry as a barista in 2009. As I began to learn more about bartending, I joined St. Regis Bar, where my career got a real boost. I like bartending much more…maybe because I like to talk with people, and I feel so great when I make a drink for a customer and they come back with a smile on their face.

In 2012, I participated in Diageo World Class programme, winning the Thailand finals, then representing the country in the Global Finals in Rio de Janeiro, where I finished thirteenth. What a great experience for a little guy from Thailand. When I came back I had a new passion for cocktails.

What is your role now with Diageo?
Currently I am the Brand Ambassador for Diageo Reserve, Thailand, and I also conduct trainings at the Diageo Bar Academy, in addition to providing mixology advice to various establishments in Bangkok. Our objective is to make bartending a real profession, and raise drinking culture in Thailand. The last five years were very successful, with many new cocktail bars opening, and people following the new cocktail trend. The bartender is not just a drink-mixing guy anymore, they are above and beyond that now.

What can you tell us about the regional finals this year? How will it be the same, and how will it be different to last year in Singapore?
I think the competition becomes increasingly challenging as the years progress, because standards get higher as more people around the world appreciate fine-drinking. The Finals in Bangkok is much grander with so many international gurus flying in and numerous activities planned for the guests, but we still share the same World Class vision here in Bangkok as in Singapore last year – to pay tribute to the bartending artistry.

Which international bartenders and Diageo World Class alumni will be attending?
We have a great opportunity to host the world’s best bartenders and global brand ambassadors to do guest bartending, seminars, and judging. These include Hidetsugu Ueno, owner of Bar High Five Tokyo; Charles Joly, World Class Bartender of the Year 2014; Marian Beke and Martina Breznanova from Nightjar London; as well as Angus Winchester, Global Emeritus Ambassador for House of Tanqueray. Also, for the first time in Thailand, Diageo is hosting an exclusive party featuring pop-up bars by famous establishments Nightjar (London), Bar High Five (Tokyo), Bulletin Place (Sydney), Employees Only and PDT (both from New York).

What does it mean to Thailand to host the regional finals this year?
For me, Thailand has come so far with its drinking culture. We are going to be one of the top cocktail destinations in this region…even the global level. I think the fact that Bangkok is hosting this globally renowned event confirms the position of this city as a world class fine-drinking city, cementing its position as a top lifestyle destination.
---
The Southeast Asia World Class Finals and Bar Show 2015 regional finals will take place in Bangkok on July 1 and 2, at Emquartier Shopping Mall. Watch this space for more reporting from the scene.