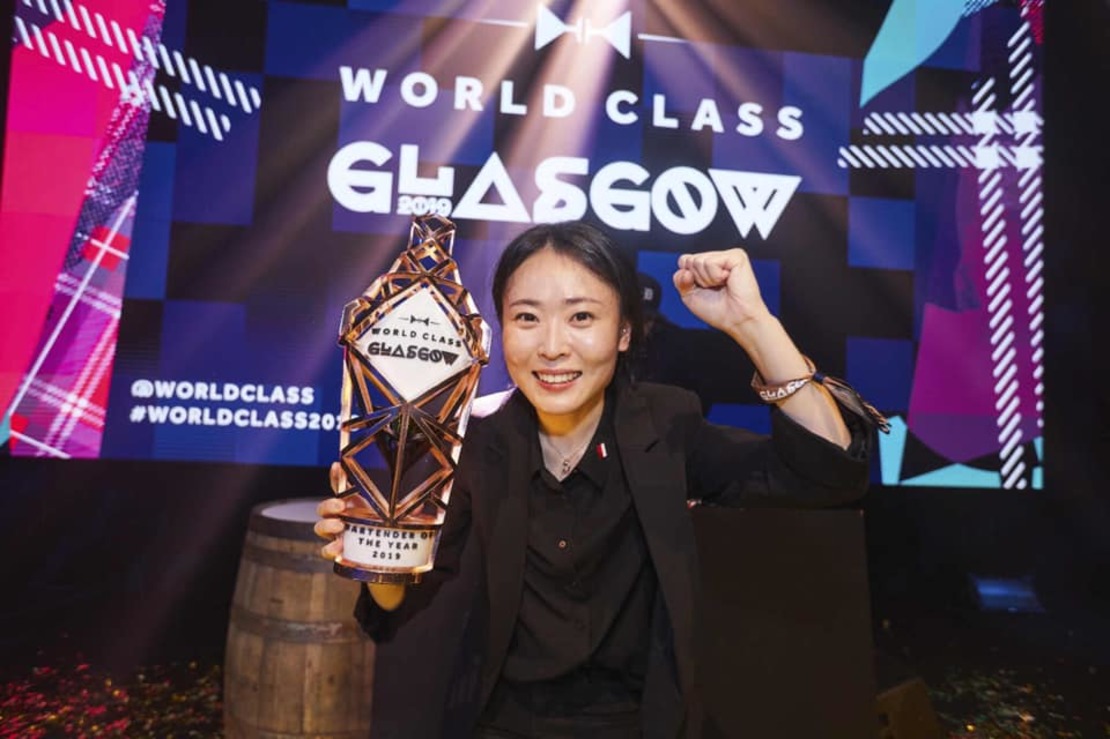 Bannie Kang with the winning trophy at World Class 2019, Glasgow.

Year of the Bannie

History was made in September 2019. As Southeast Asia woke up on the 27th, they saw the posts splashed across all social media platforms that Bannie Kang was crowned Diageo’s World Class Bartender of the Year. She is the first Asian female bartender to win, and she secured Singapore’s cocktail industry a place in the hall of fame with the country’s first ever World Class win.

I met her a little over a month later at her home base in Anti:dote, Fairmont Singapore’s modern cocktail bar, just as she was about to start her final week with them and draw to a close a five-year chapter of her life. Together with her husband Tryson Quek, Head Chef at Anti:dote, they had already planned for their next move to Taipei, Taiwan, long before the World Class win.

Their next project is Mu: Taipei, a restobar where Quek will run the kitchen, and Kang the bar. They opened their doors in early March of this year, but at the time of the interview it was in the final stages of construction. And the couple were still beaming from Kang’s win. “She did well. She did make Asia proud,” Quek gushes. “After all, she is the first Asian woman to win it. A huge thing for a small little country like us.”

Back to World Class. Kang and the other competitors were taken from the Netherlands to Scotland for various challenges, before the finale in Glasgow. It was a very intense time for all involved, but she counts it as a once in a lifetime experience.

Her greatest achievement arguably would have been the Speed Challenge – in the live stream from World Class’ Facebook we see Kang standing behind a bar on the stage, together with her competitor Alexander Remoundos from Denmark. Dressed all in black, she works methodically on the six cocktails for the judges, while the screen behind her projects her every movement to the packed room. She lines up the finished drinks on the bar, pours herself a shot of Johnnie Walker Black Label (“It’s my favourite.”) and raises it to the audience, before she slams the buzzer, clocking in comfortably within the time limit at 5 minutes and 10 seconds.

Throwback to @bannie_k showing how she absolutely smashed it in the Speed Round to take out the 2019 Bartender of the Year crown! #worldclass2019 #makeitworldclass #worldclassdrinks #worldclass #bartender #bartenderlove #bartenderlife #cheers #drinkresponsibly

Of the six judges, only one was not happy – Tristan Stephenson. Why? “There’s nothing wrong with this drink,” he said, “there’s just not enough of it.” He holds up the half-filled coupe glass for all to see. “I’m afraid it’s a short serve…and that’s a reason not to pay for a cocktail.”

In the live stream, Kang nods in agreement. When I bring it up, she nods again. “I totally agree. When I poured that drink I already knew it was short. I didn’t have a choice, I had to move on, because of time. Actually, I had a smaller coupe glass…but I think I was too nervous, and I just grabbed what I saw in front of me.” Nevertheless, she ended up taking the trophy for the Speed Challenge (as well as the Talisker Into the Wild challenge).

The biggest surprise of the night for Kang was winning the title of World Class Bartender of the Year. “I thought if they announced me as winner, I would cry, but I was too shocked! My brain was just white,” she recalls. “They were asking me, ‘what are you feeling?’ And I said, ‘can you see my face, because I can’t believe it’. Even the next day, when I woke up, I felt like it was a dream. And then I realised I had the trophy.” (As proof that you can’t keep a good woman down, Kang would return to Singapore to win Bartender of the Year from the Bar Awards Singapore.)

It’s worth noting that there were five Asian bartenders in this year’s top eight in Glasgow (representing Singapore, Hong Kong, Korea, Japan, and Taiwan. Shelly Tai of Hong Kong was the only other female bartender in the group), something both Kang and Quek are incredibly proud of. Tellingly, they are all from Asia’s most prominent cocktail hotspots.

Kang credits her communication skills for her World Class win, which for someone who moved to Singapore without any English, is quite an achievement. From the shy bartender who began at City Space with little customer exposure, to chatting up customers behind the bar and whipping up bespoke cocktails at Anti:dote under the guidance of head bartender Tom Hogan, she’s come a long way.

Now with sights set on Taipei (with a lofty goal of achieving a Michelin star for both the new restaurant and the bar), and Kang’s new position as the global brand ambassador for Diageo’s Reserve brands, her trajectory is set for 2020. In the run up to World Class 2020 – to be held in Sydney, Australia (now postponed to 2021 in light of the current Coronavirus crisis) – Kang will be leading masterclasses and training sessions with bartenders entering the competition in their respective countries. “One thing that I’m really looking forward to is going to places like Myanmar, where [the bartending scene is] just starting, and I want to give them more encouragement and good advice for them to shine,” she says excitedly.

Overall, there is one piece of advice she wants these up-and-comers to know: be humble. “I believe this [bartending] is a craft. I believe you need to have certain experience, to have a foundation, and build layer by layer. Not suddenly become a superstar. I even remind my staff: stay humble, because going up is very difficult, but going down is very quick. The legendary bartenders and chefs, they still learn. In this life, studying is non-stop, you need to keep improving yourself.”