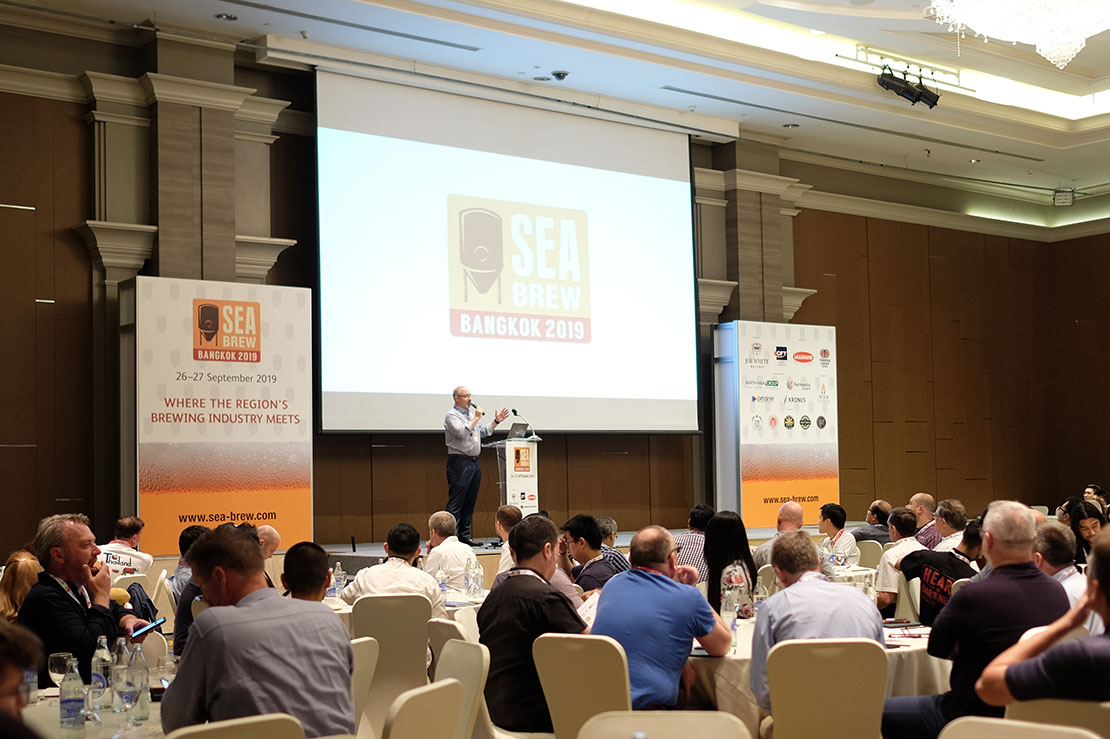 The SEA Brew Conference 2019 officially concluded on 27 September 2019 with its highest turn-out over the 2-day conference for the brewing community at The Berkeley Hotel Bangkok. The conference was packed with back-to-back seminars, workshops, a trade show, an awards night, networking opportunities, a charity night and other social activities.

The regional conference for the brewing community started out as a small 40 people event in Singapore organised by Charles Guerrier five years ago. It has since almost doubled in size every year, with over 500 professionals from around the world attending this year, from companies interested in the South East Asian craft beer scene to brewers willing to contribute towards the community. Brewers, importers, distributors, ingredients and equipment suppliers exchanged notes about the trends, business development, technology, and ways to improve the industry.

According to the report gathered by Guerrier, there are currently 232 craft and microbreweries in the entire South East Asia region, up from 150 in 2017. That is an estimated market retail value of USD300,000,000 in growth within the last 2 years.

The report also showed that South East Asia was still very much dominated by commercial breweries in 1997. In 2011, some local microbreweries started to establish themselves in the market, such as Red Dot in Singapore, The Pump Room and Kingdom Brewery in Cambodia. 2016 saw a surge of breweries opening in Vietnam, including Fuzzy Logic, Pasteur Street, Platinum and Tete; whilst in the Philippines, there were the likes of Joe’s Brew, Crazy Carabao, Katipunan, Cerveza Sagada and Turning Wheels.

Read: A glance at the beer industry in South East Asia

In general, average beer prices have decreased by about USD2 in the region with Singapore remaining the most expensive at USD10 per glass in 2018 even after reducing from USD12 in 2016. This is more than double the price from the next closest, with Philippines at USD4.20 a beer down from USD6.10. In Thailand, beers have dropped from USD5.30 to USD3.80 per glass. The only country with an increase in the price of beer is Vietnam, though marginally from USD3.20 to USD3.50.

There is a positive development in the Thai brewing scene, where a new regulation takes effect in October 2019 that raises factory capacity from 5kWh to 50kWh. For brewpubs, this means they can now brew in a bigger capacity.

Singha has opened up a program that lets home-grown brands use their facility. Thai labels that used to operate underground (some still do) or brew in other countries can now move their production back to their homeland. Some have welcomed this inclusive approach by Singha; whereas others remain cautious with their approach and would wait to see if there is a bigger agenda at play.

It remains impossible to apply for a new brewing license in Malaysia. However, other than the mainstay breweries in the country, Carlsberg and Heineken, there has been a third license held by Napex Brewery that was dormant for under a decade. It has recently started brewing Legend beers.

Despite the growing number of craft breweries in the region, imports still occupy the major market shares in the craft beer scene in South East Asia. Guerrier’s prediction chart shows that Korea’s import of craft beer accounts could be growing the fastest at 15% to 25%; Singapore and the Philippines at 15% to 20%; whereas Thailand is predicted to have 0% growth.

American, European, Australian, New Zealand, and Japanese labels remain very popular in the region and are seen as drivers for beer trends. That being said, SEA breweries are moving towards localising their beers by using local ingredients to set themselves apart from the mainstream beers.

All-in-all, thanks to the emerging local craft beer scenes in each country, it is certainly an extraordinary time to be involved in the current growth of the SEA market, whether as an industry professional or a consumer. While much of the focus for the conference has been on the industry, it is essential to recognise that consumers are the ones truly driving the growth. Breweries can be built and brewers can brew, but someone needs to be thirsty enough to be drinking those beers.

We are excited to see how far the thirst for craft beers will keep flourishing in the region but, conversely, will certain markets become saturated or fatigued? We will have to wait and see.

The next SEA Brew will be held in Taipei at around the same time in 2020.