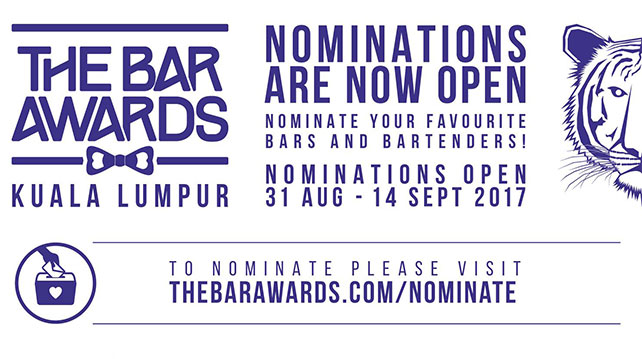 The Bar Awards is entering Kuala Lumpur as the 4th city of their year-round hospitality recognition program. This year’s Bar Awards kicked off in Bangkok (April), travelled to Singapore (June), Hong Kong (August) and now back south to complete the circle.

Kuala Lumpur, represented by the tiger symbol, is now open for PUBLIC NOMINATION for the best in 10 categories, with the Best Culinary Team being a new category created for KL. Nominations closes at 00:00 14 September 2017.

How are the categories decided?

A LEAD PANEL comprising of industry experts and opinion leaders was formed to select categories that are relevant and how they apply specifically to the Kuala Lumpur F&B scene, because no one city is the same.

Here are the 10 categories (further explanation of each category is in the form):

How does the nomination work?

1. You will be asked to select one of the 10 categories to start with. You can start with ANY of the categories and work your way through the form.
2. Each category has an explanation as to the criteria for your nominee(s) to qualify in that category.
3. You can fill in more than one nomination.
4. Give the reason(s) why you nominate that person/team/outlet to really push your nomination to win!
5. You don’t have to fill in every category but your opinion matters, you are basically choosing the winners in your heart who truly deserve the recognition (… after all these years).
6. Your nomination is not confined to bars in KL but also the whole Klang Valley.

Time is short, pull yourself a drink and let’s get started.

Before you go, this is the timetable for The Bar Awards KL. Stay tuned!