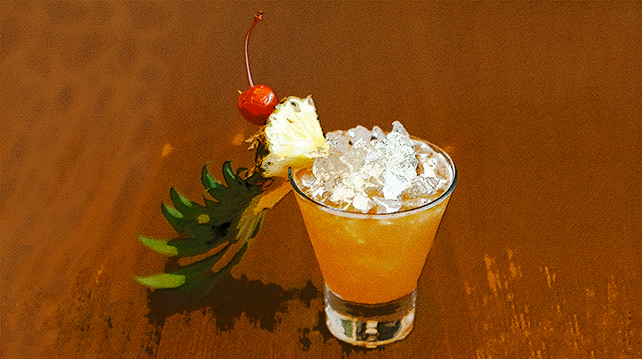 I have been trying to track the creator of the Jungle Bird cocktail, the famous classic cocktail created in the '70s at the old Kuala Lumpur Hilton on Jalan Sultan Ismail, the first five-star hotel in Kuala Lumpur.

Jungle Bird signified the revival of a tiki era and became a classic cocktail to bartenders around the world. To Malaysian bartenders especially though, it means something more. “It’s the cocktail that represents MALAYSIA and it put Malaysian cocktail culture on the world map!” says Kho Chee Kheong, Bartender of the Year 2017 and also the owner of two award-winning bars, Coley and Pahit.

The story of Jungle Bird has never been recorded in detail by Malaysians in Malaysia. It was first seen in John J. Poister’s 1989 “The New American Bartender’s Guide".

To search for the creator of the drink, we have to go back to the place where it all started, the Kuala Lumpur Hilton (KL Hilton).

KL Hilton (which is distinct from the new Hilton Kuala Lumpur at Sentral opened in 2004) opened on 6th July 1973, later became Crowne Plaza Mutiara in 2002 and was eventually torn down to make way for new development in 2013. The closing of the hotel was an emotional day to many who had worked and who stayed as guests there.

My investigation has allowed me to meet the very first people who worked in the international-standard hotel industry in Malaysia. All of them showed gratitude for the time they were there, friends they’ve made and things they’ve learned. One of them is Pirabakaran Arumugan, fondly referred to as “Jason”.

Jason had been with KL Hilton since it was constructed and stayed on till the hotel was torn down. “The hotel is my life and family.” After 45 years, Jason is still working. We found him at Intercontinental KL as a Guest Relations Ambassador. He’s now 64 years old.

“I was thrown out of the interview when the hotel was hiring before it was open. They told me I didn’t look the part.”

“Everyone wanted to work for the first 5-star hotel, it’s the most prestigious job you could ever have. If someone knows you work in the KL Hilton, they’d marry their daughter to you!” Jason chuckled.

Jason was 19 and was working for the construction company that built the hotel. His employer at that time, seeing his eagerness to join the hotel, gave him 5 dollars to buy a new shirt and a pair of trousers. He told Jason that the boss of KL Hilton would be visiting the construction site and he should man the lift which the visitors would be using. Jason’s instruction was to talk to the visitors. So he did. 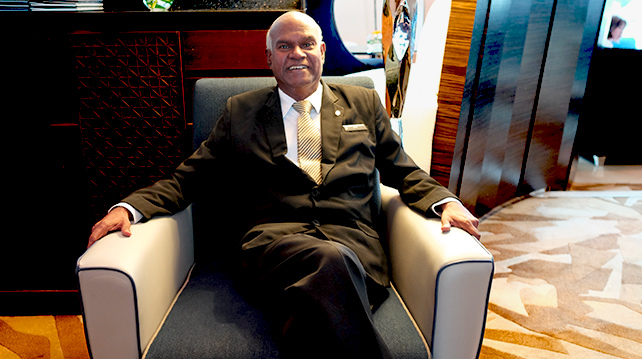 A gentleman saw this neat looking young man in the lift who spoke English and asked him, “Son, why aren’t you working for us?”

“For the Hilton, of course. What’s your name?”

“My name is Pirabakaran Arumugan.”

After a pause, thinking, “That’s too long. Call yourself Jason and come work for us.”

That gentleman was the Chairman of Hilton International, Mr Strand.

Jason asked to start work on December 25, 1972 so that he can remember his anniversary with the hotel. He never took leave from work every Christmas since then.

Reminiscing the old days while flipping through his photo book, this man has serviced politicians, internationally-known celebrities and has been in and out serving important meetings that shape the country. He is the face of hospitality.

Many say that it was Muhammad Ali that brought the Jungle Bird cocktail to fame. I asked Jason if that was true.

Jason was the dedicated personal butler to many important persons that stayed in the hotel, he was even asked for sometimes. Among them were Margaret Thatcher, Nelson Mandela, Lee Kuan Yew and Shah Rukh Khan. If you have met Jason, he’s one that pays attention to details. “That’s the only thing there is, good hospitality is through observation! Give your guest what he wants and he will always remember you.”

Jason told me he wouldn’t know how Muhammad Ali had anything to do with the Jungle Bird cocktail. The world boxing champion didn’t drink alcohol, the only thing he wanted was orange juice. One possible association would be Muhammad Ali’s personal butler at that time, Balachandran, who flew to America with him. The cocktail, served as a welcome drink at the Aviary Bar for guests staying at KL Hilton, might have come up in conversations during his trip there. No one knows where the butler is now. Jason said he quit the hotel job after returning from America and moved to China.

Error on the date of creation

The Jungle Bird recipe was first recorded in “The New American Bartender’s Guide” by John J. Poister in 1989 which stated that the drink was created in 1978. This needs to be corrected as Jungle Bird was created to be the welcome drink of KL Hilton ever since it opened its doors on 6 July 1973. 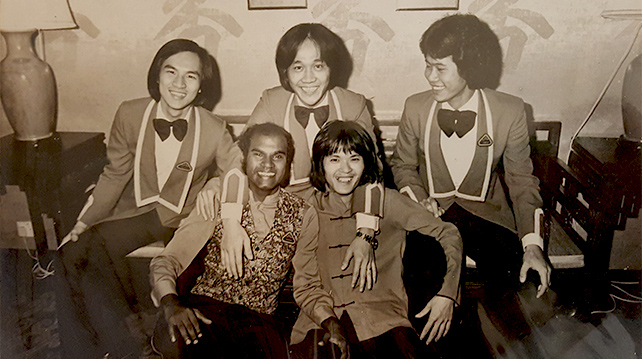 Jason and friends in KL Hilton circa 1975 (from Jason's photo album).

Jungle Bird is special for several reasons, mostly because of its taste. The original recipe used Jamaican rum but it works practically with any brand of rum and doesn’t need any special syrup. Adding Campari also means giving a usually perceived as sweet tiki drink a kick of bitterness, contributing some sophistication to the recipe.

It has been a long search for the creator of the Jungle Bird cocktail. I started by going to the new Hilton KL which opened in 2004 to ask for information. I was told they knew who he was and would be arranging the interview, but I never heard from them again.

The next thing I did was to go online (like many of us would do nowadays). I came across a Facebook group that was dedicated to Tin Mine, the famous discotheque in KL Hilton. The admin is one of the DJs, Min Kak. Through messages, he introduced me to Raj, one of the bartenders in the 70s in KL Hilton and I arranged to meet him.

Raj, who joined the hotel in 1975, told me that it could have been the F&B Director at that time who created the cocktail. He was Reinhard Steffen, who subsequently worked at Carcosa Sri Negara and later founded Swiss Garden Hotel in 1991.

A German friend helped me track down Steffen’s last work place and I found that he moved to China in the 90s. There was a website for the company with his picture on it but there was no reply to my email to the general enquiries. Feeling very sure that it was he who created the cocktail, I proceeded to publish the story in our launch issue of Thirst Magazine in March 2017.

If you think about it, it seems logical that a foreigner who had exposure to classic cocktails in the west would bring the recipe to the hotel. Raj remembers being stationed at Carcosa Seri Negara when the Queen of England first visited Malaysia. Raj was working part time then as a waiter and Steffen would call for “my Jungle Bird cocktail” at the event.

After sharing the story with the Tin Mine group, several bartenders started a discussion and it was said that Steffen wasn’t the creator. At the same time, Ash Mariano of The Vault pulled together a meeting with a bartender who used to work in KL Hilton with Angel Ng of PS150 and myself.

The bartender was David Hong, who now owns Boutiq Wine, a wine distribution business in Malaysia. We met him at his office.

Hong joined in 1972 as Wine Butler at Melaka Grill, one of the restaurants in KL Hilton.

“I remember Jungle Bird was served as a welcome drink for arriving guests.”

David doesn’t think Steffen created that drink but instead it was the Beverage Manager, Jeffrey Ong, who was tasked to create a drinks menu for the bar. “I thought the drink was too sweet, didn’t know it made it to world-known classic cocktail!” laughed Hong.

This was confirmed by Hamid Harun, who was a bar boy since the opening of the hotel. “Jeffrey Ong was the Beverage Manager and I believe he created that cocktail.” Hamid is currently a consultant to hotels and bars.

The name of the bar, Aviary, was given by Steffen. Raj emphasised this and went on to describe the bar. Guests facing the stage would see the birds through a glass panel where they were kept in a netting area near the swimming pool. The name Jungle Bird refers to the birds.

When I was asked by Malaysian bartenders about this drink, the most important question was: Is the creator local? Now you know the answer is very likely yes, and his name is Jeffrey Ong. So there is one world-known classic cocktail created by a Malaysian. At least we can bag that now and put the matter to rest.

I was also asked if there is a story to tell about the cocktail. There is. How can there not? Created by a manager who was remembered by his crew, it brought fond memories for guests who visited and stayed at the hotel. The hotel where it started remains the home of many who have worked there. It represents hospitality, friendship and service. It was never about the drink, but always about the people.

The original recipe of Jungle Bird

After I published the first piece of the Jungle Bird story in the launch issue of Thirst Magazine, the Facebook group shared the photo and that post received some feedback. All the previous KL Hilton bartenders said the glassware was not what the drink was originally served in. They said it was a ceramic bird vessel where the drink would be sipped from the opening at the tail. According to Raj and Jason, all the glassware was sent to auction when the hotel was closed but before they were sent off, the bird glassware was nowhere to be found. They could perhaps have been stolen.

Hamid described the glassware: It’s a stemmed wine goblet with an engraved bird on the side of the brown and greenish porcelain glassware.

During my online search, I also found a set of stirrers belonging to 5 out of the 6 outlets in the hotel, which includes one from The Aviary Bar. Perhaps one day I will find the original ceramic Jungle Bird glassware. 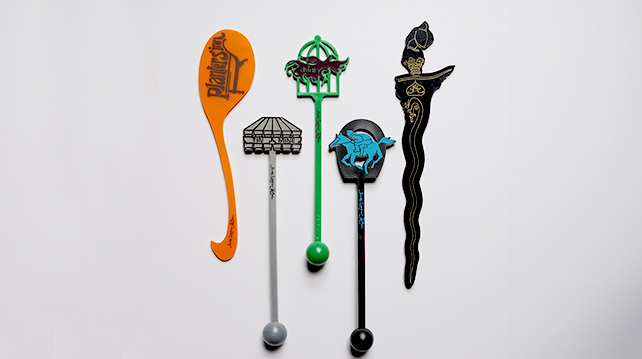 Reinhard Steffen passed away in September 2017. I never got to speak to him.

No one knows where Jeffrey Ong is after he left Hilton. Hamid said he last saw Jeffrey at Cititel Penang a decade ago.

Special thanks to Vicky Wong of Intercontinental KL who helped me arrange the meeting with Jason.