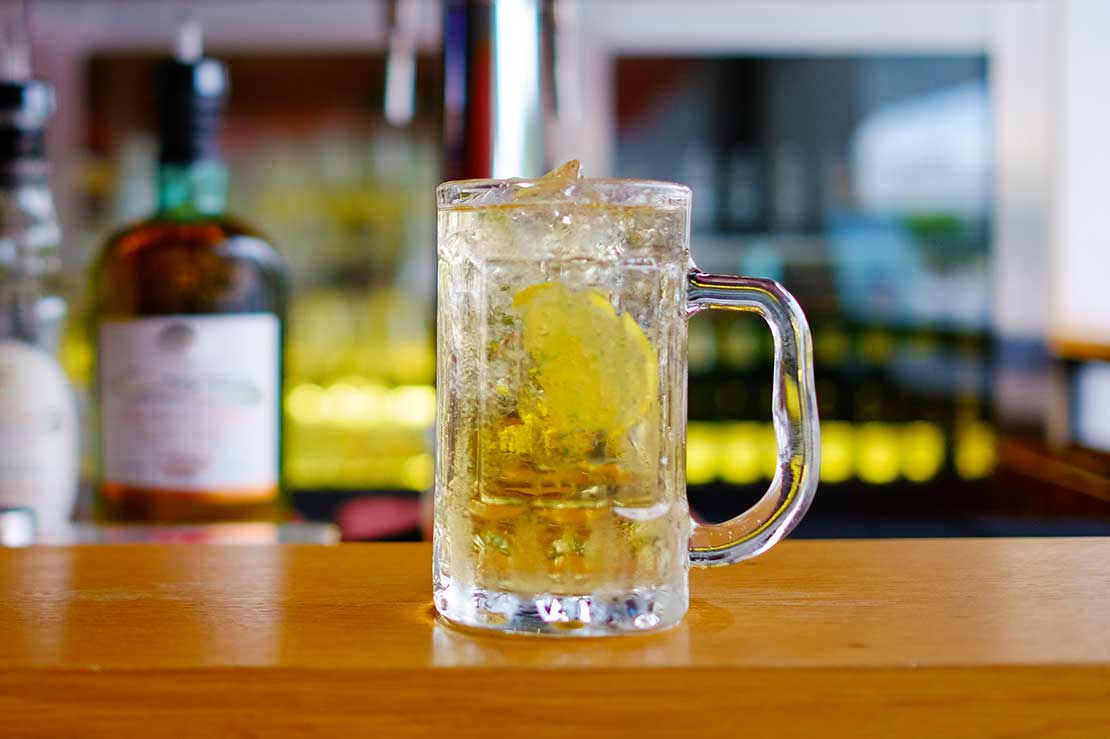 Highball in a beer mug

Whisky Highball, a two-ingredient drink that’s been made a craft in Japan

Mention highball and many would associate the tall drink with Japanese whisky as whisky highballs are served in most izakaya (Japanese bars that serve small dishes to accompany the alcoholic drinks). Consumption of highballs has risen and declined numerous times over the decades but it has stuck with the Japanese culture through clever marketing and association with food.

According to The Bartender’s Bible 1999 by Gary Regan, the word “highball” came from the 19th century, when a train was behind schedule, a ball would be placed high up on a pole at the station to signal the train crew to travel at full speed.

The rules of a highball are one liquor, one mixer (one garnish if you wish) and can be made quickly.

“Ball” was also bartenders’ slang for a glass in the 1890s and “highball” is a tall glass (from "Listening to America" by Stuart Berg Flexner (Simon and Schuster, New York, 1982). Page 170), in which the drink is generally served in.

Why do we perceive the whisky highball as a drink from Japan?

Whisky has always been a luxury product in Japan. However, mixing whisky with water (called mizuwari and not highball when it first became popular in the 1950s) made drinking whisky inexpensive. It was particularly popular post WWII when the people were poor and the country was recovering from its wrecked economy. The popularity of the highball went into decline in the 1980s as newer generations of drinkers were no longer fond of what was thought of as an old person’s drink.

In 2008, Suntory brought new prominence to the whisky highball by strongly promoting their Suntory Kabukin highball, which replaced water with soda, a more stable element that enhanced the taste of whisky. The quality of water, which makes up to 80% of the drink could break the experience if its quality is inferior. They also hired a famous model as the poster girl for the brand, targeting all izakaya nationwide. Highball consumption boomed.

Today, with the rise in popularity of Japanese whisky, food and culture, the highball is a symbol of Japanese restaurants.

In addition to the increased demand for low ABV drinks, brands are coming up with their own versions of highball recipes for the younger market.

Whisky highballs are even available in cans and can be bought from convenience stores or vending machines in Japan, the US and some high-end supermarkets in Malaysia.

How the Japanese made a 2-ingredient cocktail a trend?

A highball should be made quickly. But when it comes to the Japanese, where every craft is elevated and meticulously prepared, even a two-ingredient drink like the highball has a ritual. They are made to perfect the serve and so it tastes consistently the same, every single time.

In Japan, bars that take the highball seriously follow this ritual. The clear ice cubes must be stacked on top of one another in the highball glass before pouring the whisky. This is then stirred 13.5 times clockwise (seriously?) and another 3.5 times again clockwise after the soda is poured. All done swiftly and with no spillage.

You must admit, the Japanese value packaging and showmanship. The preparation of a whisky highball in a cocktail bar or a high end restaurant can be mesmerising to watch. So elegant that the anticipation of tasting it is already built up before the whisky is even poured. It probably takes the Japanese longer to make a highball than Regan’s rule of “fast”, although it is still faster than making, say, a Negroni.

Highball does not have to be with whisky

There may be only two ingredients in a highball, but there are many combinations and it doesn’t have to be whisky.

A highball’s alcohol intensity is easily adjustable from 1:2 to 1:4 ratio, which prolongs the drink at least double the time. It also reduces the alcohol content to about 5%, offering an alternative to beer to go with food.

Read: 4 highballs that make you an expert in food pairing

Other drinks that can also be a highball

Remember the rules of a highball: one liquor, one mixer (one garnish if you wish) and can be made quickly. Count Gin & Tonic, Cuba Libre, Screwdriver, Bourbon & Branch, Brandy & Soda, Cape Codder, Black Russian, The Godfather, Aperol Spritz… Now get some ice and a tumbler, and go conquer the world.

What is your highball recipe?