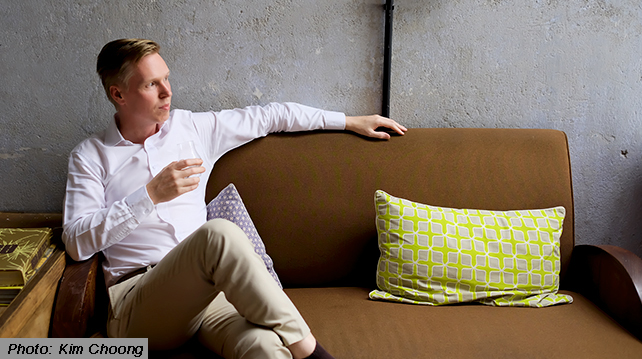 We have had the privilege of sitting alongside Matthew Fergusson-Stewart, William Grant & Sons APAC Brand Ambassador, chatted over some tipples and attended his whisky workshops in the past. Upon hearing that the Western Australian from Perth was awarded Scotch Whisky Brand Ambassador of The Year 2017 (rest of the world, outside UK & US), Icon of Whisky by Whisky Magazine, we quietly toasted ourselves with a dram of Glenfiddich 18YO and did a little dance, simply because we are so glad to have learnt about whisky from this passionate whisky whiz who has no reservations when it comes to whisky education.

But honestly, the news didn’t come as a big surprise, since Matthew has been relentlessly and actively promoting Scotch whisky through the years. His work in promoting whisky started even before becoming the Brand Ambassador for the best-selling Scotch whisky in the world. The love for single malt whisky grew in the chemistry grad during university where he would become the State Manager of The Scotch Malt Whisky Society in his home city of Perth. When he found out about the whisky society, there wasn’t a presence in Perth so he volunteered and grew the group from 10 members to 200 in 2 years that became the best-selling state for whisky sessions in the whole Australia.

In 2009, Matthew moved to Singapore to be with the love of his life, and now wife Elaine Seah (the founder of Brand Inc. which is the PR for the annual Whisky Live Singapore). He founded Stewart’s Whisky Consultancy in Singapore before managing South-East Asia’s largest whisky selection in The Auld Alliance Singapore. That’s where he was spotted by William Grant & Sons to be the Brand Ambassador for Glenfiddich.

The Brand Ambassador of The Year award is immense for brand ambassadors in the whisky world. With an extensive selection process comprising various accomplished industry professionals, more than one person would have had to select Matthew, and he still doesn’t know who they are.

While the award was unsurprising to us, the news totally knocked the socks off the whisky veteran. There isn’t an actual definition of what a “best brand ambassador” has to be. For Matthew, his approach comes from a technical understanding of whisky and how flavours arise in the production process, while delivering his knowledge of whisky in straightforward terms to the consumers.

Thirst: What does it mean to you to be awarded this title?

Matthew: In some ways everything and in some ways, nothing. I always aspire to be the best possible brand ambassador I can be and to be of the quality that I would be considered for these awards. At the same time, that’s the level I want to be at but I don’t necessarily need the award to say that I am here. I am incredibly honoured by it as it’s a good validation that I am going in the right direction but in the end, the goal is not to win awards. The goal is to be the best brand ambassador in the world. That’s what I sometimes reply to people jokingly when they ask me about my goal as a brand ambassador.

Matthew always has an answer for any question but we never hear him criticise other brands. “Many brands are working incredibly hard to make good quality whiskies and that shouldn’t be taken away from them”. Matthew believes that his brand stands up on its own merit and doesn’t need to put down other brands to make his look good.

Thirst: Now that you are “the best”, is there higher expectations of you going forward?

Matthew: Ya, what am I going to do next? That’s only a problem if I had set out to win the award but I didn’t do it with that purpose. I set out to be the “best brand ambassador” I can be. That means I keep trying to be better. Every time I do an event, I do better than the last. Winning an award is a good validation but it doesn’t take away anything because I can still get better and better. The day I stop learning about whisky is the day I stop drinking.

During the interview, we learned that the Glenfiddich’s experimental series may come to our shores this year. Find out more here: Glenfiddich's game-changing expressions

We also cheekily asked Matthew a non-work related question to find out more about his inner-self.

Thirst: Which character would you like to be cast as in a movie, if you were allowed to choose?

Matthew: I would be Luke in Cool Hand Luke. A non-conformist who got drunk one night and cut the heads off parking metres and then got sent to jail. He was sentenced to work in a farm. I like the movie and the character because Luke stays true to himself.

Thirst: What do you say to those who have never tried single malt whisky?

Matthew: Try it. Experiment with it. Have a tasting plate. Get a classic of each region and see what you like.