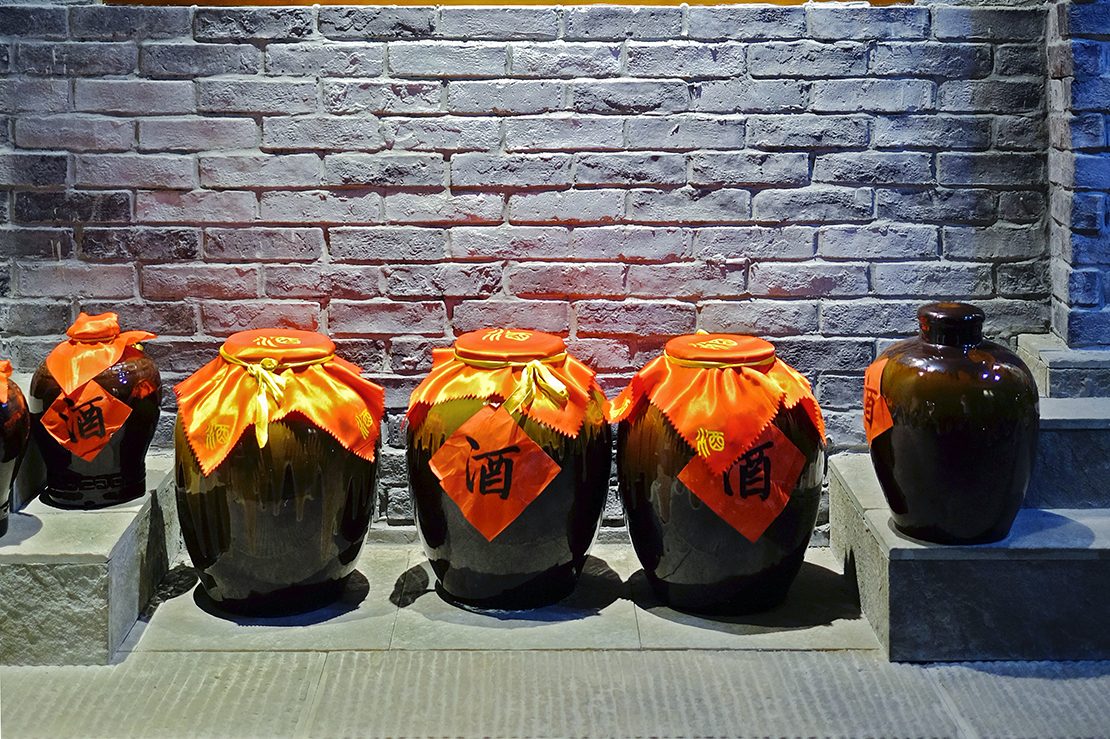 You may not know it but baijiu, the national spirit of China, is the world’s most consumed alcohol thanks to the country’s 1.4 billion population. In 2018 alone, 1.8 billion litres of baijiu were sold, more than any other spirits category in the world.

Baijiu is also very much a misunderstood category outside of China, even though it is an essential part of Chinese culinary culture. Kweichow Moutai (贵州茅台), Luzhou Laojiao (泸州老窖), and Wuliangye (五粮液) are just the few long-standing state-owned brands that are also well-known outside of the country. They are heavily promoted by the Chinese government as part of the country’s identity and at times are given as gifts to another country’s leaders.

These traditional baijiu brands are known for their heavy aroma and high alcohol content (up to 68% ABV). High grade baijiu can command a high price for its quality, aroma and flavour, and occasionally for their elaborate bottle design and packaging.

As the age of traditional baijiu drinkers increases, the spirit is seen as less hip among younger drinkers. To appeal to younger tipplers and to introduce an easier drinking spirit to the international market, brands such as JiangXiaoBai are producing baijiu that has light aroma with lower percentage of alcohol (40%), that is suitable to be drunk neat or in a mixed drink.

But what is baijiu? How is it different from other distilled spirits like vodka, gin, whisky or rum?

Raw Material
To start with, grains such as corn, rice, wheat, sticky rice and sorghum are used to make all baijiu, with sorghum as the main raw ingredient. They can be a mix of several grains or just sorghum alone.

Jiangxiaobai is an example of baijiu produced using only sorghum for its spirit, which they source from their own farm in Baisha, Chongqing. 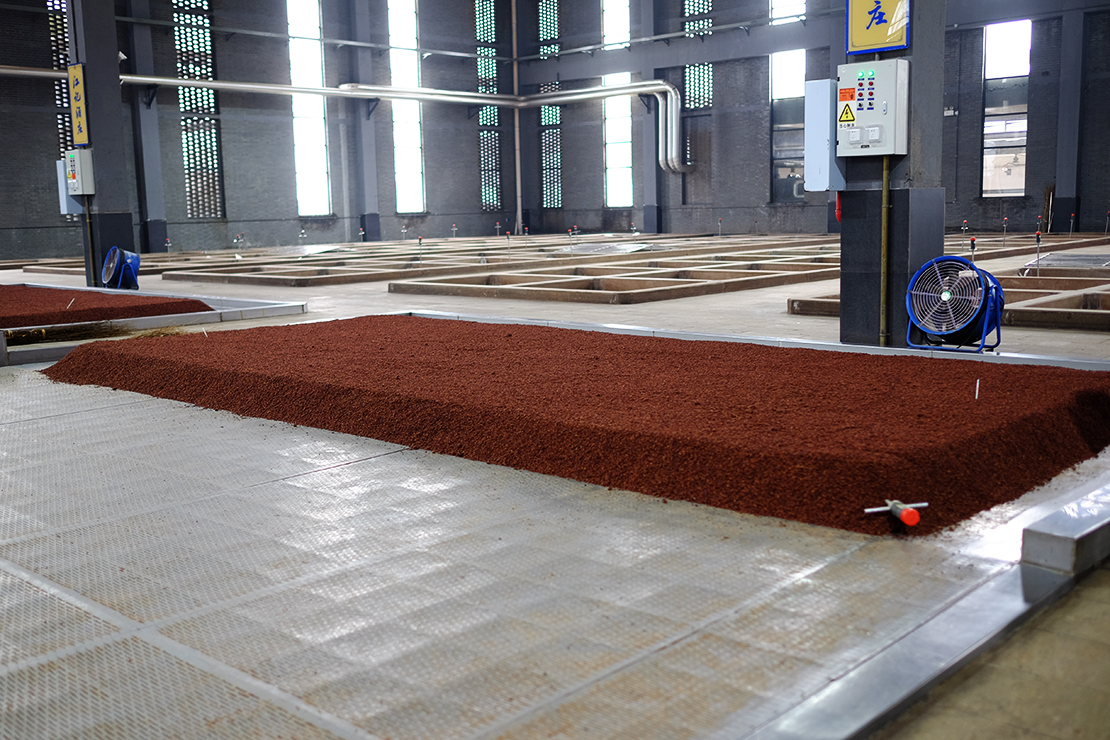 Light aroma baijiu is more easily acceptable to new drinkers and used by bartenders for making cocktails. In the recent World Cocktail Championships held in Chengdu, China, baijiu was the main spirit in the entire competition and Jiangxiaobai was widely accepted by bartenders as the easiest baijiu to work with. 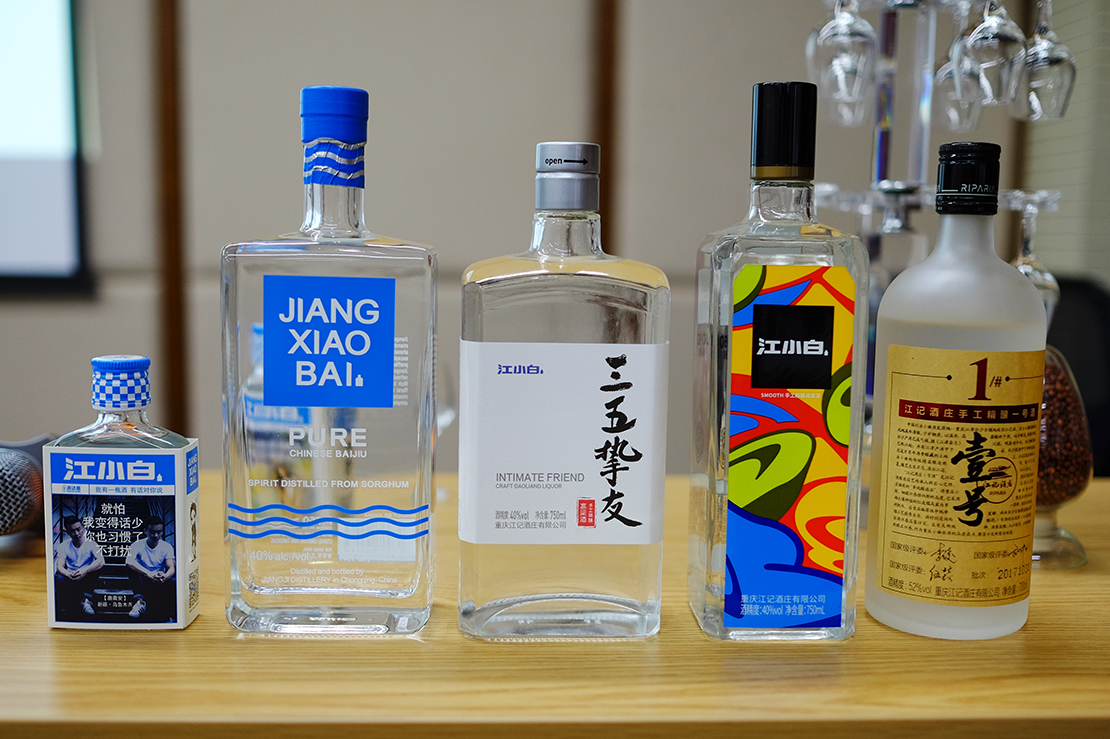 Baijiu in the Jiangxiaobai range

Fermentation
The fermentation process for baijiu is unique in three ways. First is the use of yeast or malt as the fermentation starter for other distilled spirits, whereas a dry block called “Qu” (曲) made of grains, rice husks or glutinous rice that collect yeast, mold and bacteria is used in baijiu. There are 2 main types of qu used for Baijiu fermentation – DaQu 大曲 (usually in brick shape, mainly from wheat and/or barley flour, produces more complex baijiu), and XiaoQu 小曲 (small balls from rice dough, produces more aromatic baijiu). Qu (曲) is a reflection of the “terroir” down to the individual distillery since each one will have a different combination of micro-organisms in their respective locations.

The second difference that sets baijiu apart is that the base for fermentation of other spirits is in liquid form, whereas for baijiu, it is solid state fermentation of the grains and can be done numerous times to create complex flavours for the end product.

Third is the pits in which the fermentation takes place. These pits are dug into the ground and made with mud, stone bricks, earthenware or quartzite. The condition of the soil in the pits, temperature, surrounding climate and the type of qu used will influence the flavours of the resulting baijiu.

This is the main stage that determines the aroma and taste of the baijiu. For Jiangxiaobai’s light aroma baijiu, fermentation takes place for 30 days using low temperature Small Qu. It is then stored in ceramic earthenware in stone pits and fermented in solid state to achieve a clean and aromatic base for distillation. 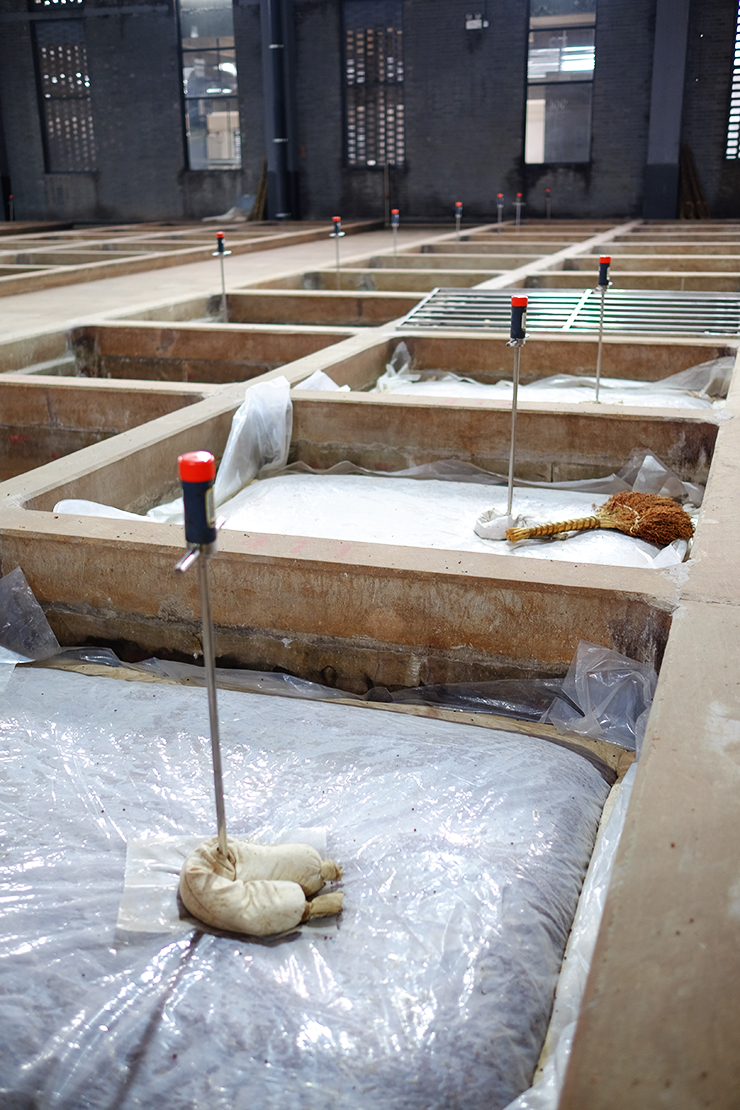 Distillation and ageing
The distillation of baijiu is through a steam pot, where the grains are put on top of a perforated plate for hot steam to cook through. The steam rises through the neck of the still where it is condensed and collected to become the base liquid for baijiu. This liquid is then put in ceramic or stainless steel pots for ageing, unlike other spirits that normally age their liquid in oak barrels. The size of the containers used to age the liquid as well as the equipment for filtration, will also have an impact on the quality and taste of the baijiu.

Jiangxiaobai fermented sorghum goes through a pure steaming process twice. The pot used to collect the steamed aromatic liquid is stainless steel. It is then stored in stainless steel tank to age for 30 days. 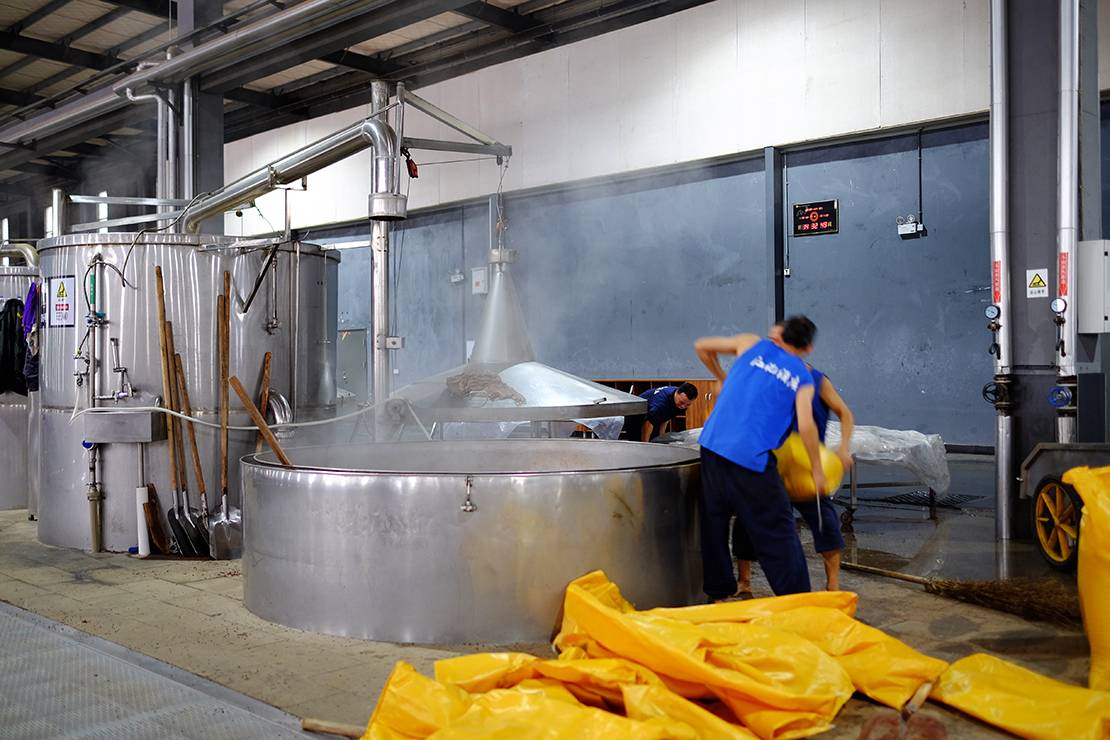 Pouring fermented sorghum into the steaming tank for distillation

Blending
Blending techniques are passed on by master distillers to their pupils verbally and in practise. To achieve consistency, the role of the master distiller is to ensure that the baijiu is the reflection of the brand and its heritage.

Tasting glassware
A clear tulip shaped glass is recommended for tasting baijiu as it shows the colour of the liquid and maximises the aroma of baijiu. The shape of baijiu’s tulip glass is slightly different from those used for whisky for example. It has a rounder body and much smaller compared to the Glencairn glass.

Colour: The liquid is clean and clear. Upon swirling around the glass, the liquid slides down smoothly leaving legs that are soft and not clingy.
Aroma: Floral and fruity aromas with some honey and caramel. There is a freshness like cut grass.
Palate:  Sweetness on the first sip when the liquid touches the tongue, followed by the fruity and floral notes. It is smooth with a silky texture and a clean finish. 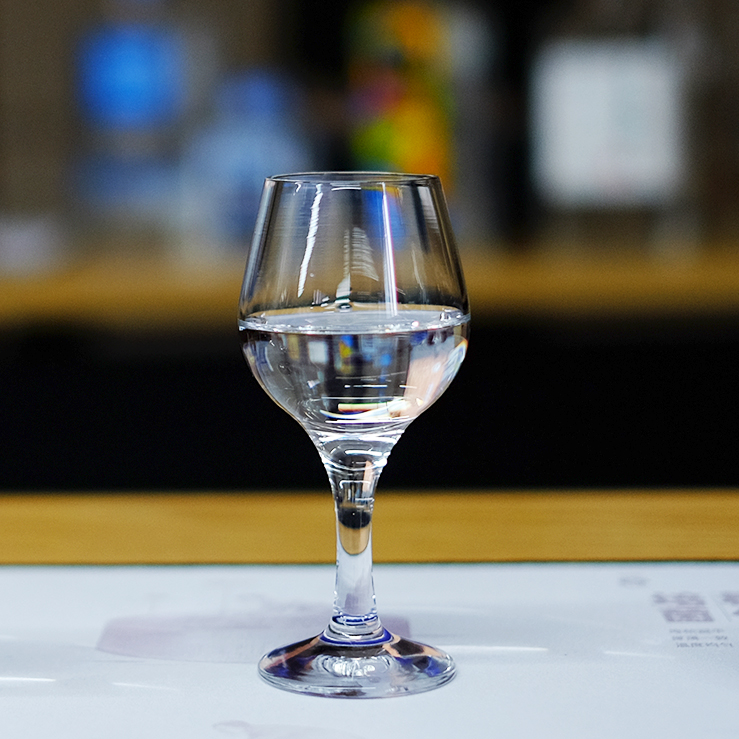 Labelling requirements
By law, certain information is required to be stated on every baijiu label. General information such as product name, net content, manufacturer name and address, production date, aroma type and alcohol content are usually available on the bottle.

Jiangxiaobai has designed it’s packaging to be simple and clean looking to appeal to the younger crowd, in contrast to the extravagant and traditional bottle designs that baijiu is usually packaged in. Their 100ml bottle has made it a popular choice for consumers since the smaller serving makes it easier to consume as the Chinese culture usually demands that the bottle is finished once it is opened. 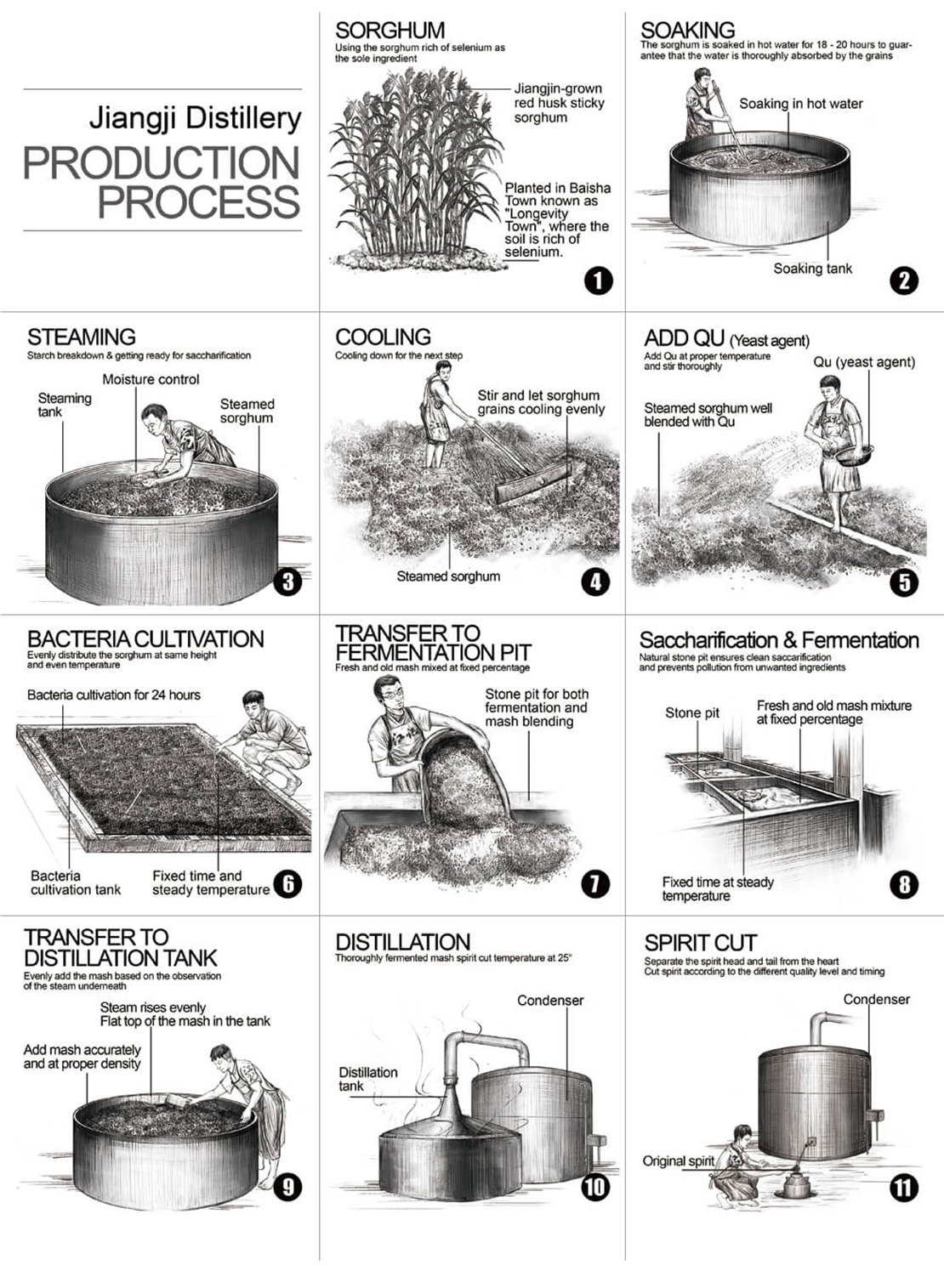 100ml and 500ml bottles of Jiangxiaobai Pure are now available in selected supermarkets and bars in Malaysia.